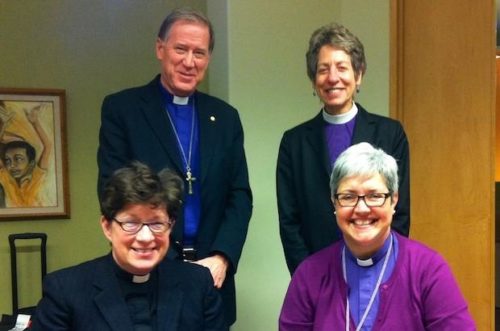 They could, for instance, issue a joint pastoral letter in response to a natural calamity and invite their members to contribute to relief and recovery efforts through one of their four relief agencies, said Archdeacon Bruce Myers, the Anglican Church of Canada General Synod’s coordinator for ecumenical and interfaith relations. Myers served as staff support at the meeting.

“Broadly speaking, these informal conversations are aimed at exploring ways to extend the implications of our Anglican-Lutheran full communion partnerships across the international boundary,” said Myers. “What more could we be doing as North American churches in full communion?” The Anglican Church of Canada and the ELCIC have been in full communion since 2011, as have the ELCA and the Episcopal Church.

“as a step towards reconciliation with indigenous people in North America,” said Myers. The Anglican Church of Canada and the Episcopal Church have both repudiated the Doctrine of Discovery.

The Anglican church, however, “has only begun to try to give tangible expression to that renunciation,” said Myers. When it renounced the Doctrine of Discovery at the 2010 General Synod, the church pledged a review of its policies and programs to expose the doctrine’s historical impact and end its continuing effects on indigenous peoples. The Doctrine of Discovery was a principle of charters and acts developed by colonizing Western societies more than 500 years ago.

[The Episcopal Church renounced the doctrine at its 2009 meeting of General Convention.]

At the meeting, Hiltz also informed the other bishops about his church’s recent decision to designate the seventh Sunday of Easter as Jerusalem Sunday. In response, the other three churches “pledged to explore the possibility of making it a common observance,” said Myers.

Each leader also agreed to prepare a devotional piece for different Sundays in Advent, to be made available for individual or congregational use in their churches during the 2014 Advent season.

They also agreed to look at what they might be able to say collectively in response to an ecumenical convergence text on ecclesiology called The Church: Towards a Common Vision. The document was issued March 2013 by the Faith and Order Commission of the World Council of Churches (WCC). Described by Myers as “groundbreaking,” the text addresses what churches might say together in areas such as peace and justice in the world, and how they might grow in communion and overcome past and present divisions. Theologians “from the widest range of Christian traditions and cultures” produced the text for the WCC.