Turner, 80, died on the afternoon of New Year’s Eve in Philadelphia.

Turner, a former staff officer for black ministries at the Episcopal Church Center in New York from 1972-1983, was assistant to then Bishop of Pennsylvania Allen Bartlett in 1988 when he was elected suffragan bishop for that diocese.

Out of some 900 men who had up to that point in time been elected bishop in the Episcopal Church, Turner was approximately the 27th black priest elected. He was also the first black bishop of the then-205-year-old diocese. A total of nine candidates were in the running, including the Rev. Nancy Van Dyke Platt of Maine who, if elected, would have been the first woman bishop in the Anglican Communion (that distinction fell in early 1989 to the Rt. Rev. Barbara Harris). 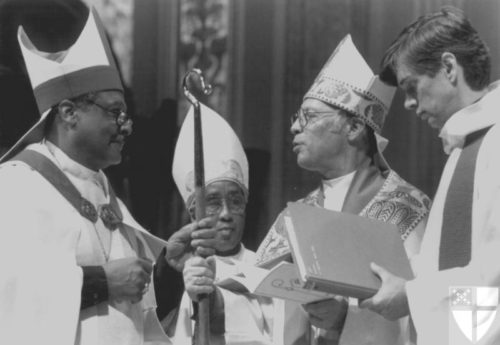 Speaking in Nov. 6, 1992, at St. Thomas Episcopal Church in Philadelphia during a service to rebury the remains of Absalom Jones — the first African-American ordained a priest in the Episcopal Church — nearly 200 years after his death, Turner said that “we have indeed come this far by faith.”

“We can be justly proud of our sojourn in the Episcopal Church, although it has been an uphill struggle,” he said.

Turner officially retired as suffragan in 2000 and also served the diocese as an assisting bishop.
Turner was born in Norwood, North Carolina, on July 19, 1933. He earned his A.B. degree from Livingstone College and his S.T.B. degree from Berkeley Divinity School (from which he also held a D.D. degree); he pursued further graduate study at General Theological Seminary. He was ordained deacon, and later priest, in 1965. Turner was vicar of the Church of the Epiphany in Dallas (1965-1966) and rector of St. George’s Church in Washington, D.C. (1966-1972).

While in Washington, D.C., he founded the Washington Episcopal Clergy Association. He was also on the board of directors for the Kanuga Conference Center, and was a trustee of Berkeley Divinity School. Turner founded the Organization of Black Episcopal Seminarians. He was also the editor of the hymnal Lift Every Voice and Sing I. He served on the Episcopal Church’s Executive Council.

At the Jan. 11 requiem, Bartlett will preside and be assisted by Pennsylvania Bishop Provisional Clifton Daniel III. The Rev. Harold T. Lewis, rector of Calvary Church, Pittsburgh, who succeeded Turner at the Church Center, will preach.

Turner is survived by his wife, Barbara, and their children.