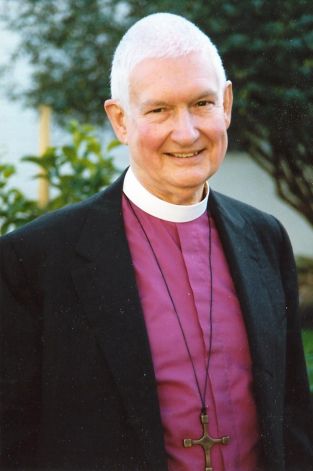 Charles, 87, died Dec. 26 at Coming Home Hospice in San Francisco. He had moved to the hospice in early December.

Charles ashes will be interred at a later date in the Diocese of Utah’s Cathedral Church of St. Mark in Salt Lake City.

The eighth bishop of Utah, Charles was the diocese’s first bishop after it transitioned from being a Missionary District in 1971. He served until 1986.

“With few resources, he led the diocese through a period of growth in southern Utah, the calling of priests from congregations, and the church’s opposition to the Vietnam War,” the diocese said in announcing Charles’ death.

Charles also served the church during a time of change, the diocese noted, citing the ordination of women and the adoption of a new Book of Common Prayer. Charles championed of the new prayer book, having served on the Standing Liturgical Commission, which authored it, the diocese said.

“He carried the diocese forward during a time of great challenge and few resources, Hayahsi said. “Where others might see scarcity, Bishop Charles saw an abundance of spiritual resources from God and in the hearts and wills of the people of the Diocese of Utah. Bishop Charles demonstrated fidelity to the vows of Baptism.  He steadfastly modeled, proclaimed by word and example, and strove always ‘for justice and peace among all people,’ and he ‘respected the dignity of every human being.’”

Hayashi reported that Charles was “especially joyful” when a federal judge struck down Utah’s ban on same-sex marriage just before Christmas.

“As a bishop, I have been privileged to be with Otis as a fellow bishop, colleague and friend,” Hayashi said. “My prayers are being offered for Otis and all his family and friends who, like me, will always be grateful for his life and witness, and who will miss him terribly.”

Born in Norristown, Pennsylvania, in 1926, Charles was ordained a priest in 1951 and served churches in Connecticut, New Jersey and New York prior to being called to Utah.

While serving in Utah, Charles helped organize opposition to the MX missile, cost-effective health care, the first Utah hospice, housing for elderly and handicapped citizens, and advocacy for minorities, women, the handicapped poor and unemployed.

Charles and his then-wife, Elvira, raised five children during his episcopate. He also served for two years as the bishop in charge of the Navajoland Area Mission during its inception.

After he left the Diocese of Utah, he was named dean of Episcopal Divinity School which he served until 1993.

“Otis’s 60 years of pastoral leadership — at EDS, in the Diocese of Utah, and at Oasis California — leave an indelible legacy. In every community he worked, in every life that he touched, Otis embodied this seminary’s ideal of working to advance God’s mission of justice, compassion, and reconciliation,” said the Very Rev. Katherine Hancock Ragsdale, EDS’s current president and dean.

Just after he retired from EDS, Charles sent a letter to his colleagues in the House of Bishops telling them that he was gay. The bishops discussed his disclosure during their meeting in Panama in September 1993. He was the first Christian bishop of any denomination to come out as gay.

He married Felipe Sanchez-Paris in 2008 (who died in August 2013) and continued living in San Francisco, where he had moved in mid-1993. Charles remained in active parish ministry. He also continued regular attendance at the House of Bishops until this year.