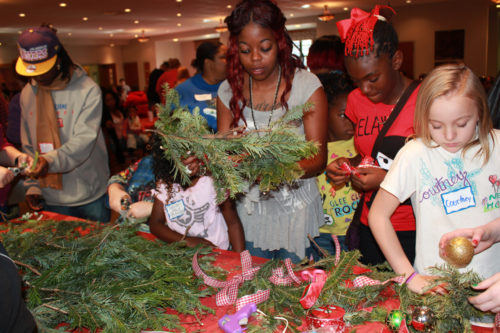 Children make wreaths as part of the annual Christmas party given for them by New Hope Oklahoma. Photo: The Rev. Judy Gann

Michelle Young started attending the agency’s afterschool programs — and also its Christmas parties — in seventh grade, when someone told her about New Hope Oklahoma. The agency was begun by the Episcopal Diocese of Oklahoma about 20 years ago to assist children who have at least one parent in prison.

“A lot of people told me I would turn out just like my dad, going in and out of jail all the time. But, with New Hope, they tell you, they show you, a different path. You can stay in school and get your education,” said Young, 19, a freshman at Oklahoma State University, who volunteers at events like the upcoming Christmas party.

“It’s great fun. There are different activities.  You can create your own reindeer, your own treats. There are toys and presents and food. It gets pretty hectic but it’s a lot of fun. The kids love it.”

Executive Director Lindsay Fry-Geier said New Hope strives to be more than “just an agency. We see our kids every day of the week. We want to be that consistency in their lives when so much in their lives is inconsistent.”

Oklahoma has the highest women’s and third highest men’s incarceration rate in the nation; New Hope Oklahoma was established out of concern for the children left behind, Fry-Geier said.

The agency was featured recently on NBC’s Today Show, which teamed up with Walmart to provide Christmas gifts for hundreds of children, an opportunity Fry-Geier hopes “will give voice to … these kids who’ve been forgotten by so many, especially around the holidays when they’re already missing their parents.”

New Hope isn’t alone; congregations and ministries throughout the Episcopal Church partner with agencies like Angel Tree, and other organizations to provide gifts to families and prisoners. Angel Tree estimates that 2.75 million children have a parent in prison and hopes to offer 425,000 gifts this year.

‘Cellblock by cellblock’ – reaching out to prisoners
For Beverly Duncan of Good Shepherd Episcopal Church in Acton, Massachusetts, packing Christmas gift bags for prisoners in local correctional facilities can be quite a production.

“Imagine 1,700 bars of Irish Spring soap and the space they take up,” she chuckled during a recent telephone interview with ENS. “Sometimes I think I never want to smell another bar of Irish Spring in my lifetime.”

In addition to the soap, the gift bags include other personal items, toothpaste, shampoo, deodorant, socks, stationery, envelopes and a Christmas card “signed by somebody with a note. Many of the cards are made by children in local Sunday schools,” she said.

It all started when Good Shepherd teamed up with Concord Prison Outreach, a coalition of local faith communities that, Duncan said, “wants to help today’s inmates become tomorrow’s good neighbors.”

Fundraising and shopping goes on all year for the gift bags and the Department of Corrections issues guidelines for acceptable items, she said. “We are obsessive in detail about these things and keep plying the powers that be at the prison, with questions like, how large or how small does this toothpaste have to be?” she said.

More enriching is the opportunity to distribute the bags to the inmates themselves.

“We go into the Massachusetts Correctional Institution, and the inmates come down by cell block,” said Duncan, 79. “They are checked in and out of the gym and we hand … [the gift bags] to each inmate, and shake his hand. He has to run the gamut of six or seven volunteers. We want to shake every hand.”

Reactions are varied: “Some won’t look us in the eye; some dance down the line. One man said this was the first Christmas present he’d ever received in his life.”

But she added that, they are “enormously appreciative. They just keep coming, cellblock by cellblock. It’s appalling. It’s one prison in one state and we have so much energy and talent locked away,” Duncan said.

“Some of it quite necessarily, but not to the extent that it is and the talent in those buildings is incredible and the lack of education is also incredible.”

She receives as many as 60 thank you letters each year from prisoners. “One man noted that when he got back to his cell, unpacking their bags led he and his cellie [cellmate] to talk about the real meaning of Christmas.

“Some of the letters are almost illiterate. They all say thank you for the items, but mostly for being remembered, that they are not forgotten people just because they are in prison.”

Jermain Billinger has been on the receiving end of such gift bags.

At 33, he has spent nearly half his life in places like Attica, Sing Sing and other New York state prisons.

“I’ve been in trouble since I was about 13 years old, that was the first time I was arrested,” the soft-spoken father of two said during a recent telephone interview with ENS. “I was arrested 15 times from age 13 to 15,” added Billinger, who just met his three-year-old son a few months ago, after he was released from prison.

If being incarcerated is difficult enough, being in prison during the holidays is worse. His mother died when he was in prison; his girlfriend “was shot in the chest and, you’re not there. You feel so helpless, so weak. I didn’t really realize how depressing it can be around these holiday times till after my mother passed.

“When I was younger, it was very hard,” he said. “You know, I was away from my loved ones and it was painful. I became numb. I numbed that feeling in some sense and sort of like locked it away.

“You’re depressed in there,” he added. “You’re so depressed you don’t even know you’re depressed. Either you’ve been found guilty or taken a plea, there’s all this anxiety, you’re trying to deal with acceptance of what you have going on now and while you’re trying to process that, the anxiety never leaves, or the emptiness, loneliness, for your loved ones.”

Newly released, he is working and eager to begin anew, and to make a difference.

“I realized that enough is enough,” he said. “The hardship that I caused my family … I see the way it affected my loved ones. I don’t want to do that anymore.”

Now, he is focused on changing his life, helping others, especially those he left behind.

Along with the Rev. Petero Sabune and the Episcopal Church of Saints John, Paul and Clement in Mount Vernon, he got involved with Toys for Joys, a nonprofit agency that helps provide holiday gifts to underprivileged children.

“First, we find out what the kids want, like a secret Santa thing,” Billinger said. “Then we get the gifts, and we address them to the children as if they came from their fathers.”

He looks back with regret, but ahead with anticipation, savoring what he calls the true gifts and meaning of the season: peace, gratefulness, joy, freedom, hope.

Now, he accepts collect calls from prisoners and offers them support, adding, “I want to give back as much as I can and reach out to those who are less fortunate.”

And his Christmas hopes? “Don’t forget your brother that’s incarcerated,” he said. “There are some innocent men there and some people who made mistakes when they were children; now they are grown men and still suffering. Everybody isn’t all bad; people do change. I would like the world to give a second chance to someone that’s at least attempting to change.”

“We also do retreats and we have a therapist on staff who does case management needs assessment for their families. They have so many great needs. We can’t meet every need for every family but we can actively work with families and know what their needs are and try to fill the gaps.”

The agency offers tutoring assistance, support groups, and other community-based programs, providing transportation for youth from some 20 area schools to Trinity Church for their afterschool programs and offering school-based groups in seven other schools.

“Trinity’s a big, beautiful parish and we’ve got every room, all the classrooms, conference rooms filled. We go from 5-7 p.m.,” she said. “The kids come and work with each other and struggle together; we have a support group for caregivers, too. It really is our hope that it creates a community.

“All of our summer staff this year were college students who were in the program and had graduated and are the first in their families to attend the university,” she added. “That’s such a beautiful thing. Some of our high schoolers will say that they love coming to camp and programs and looking up to the older kids and knowing they were going to make it. It is something powerful for our kids.”

Michelle Young agreed. “New Hope has meant a lot to me,” she said. “They bring a lot of people in and you expect them not to know your name, but they do. They know every single child that comes into their program. You’re not a number. You’re an actual person.”