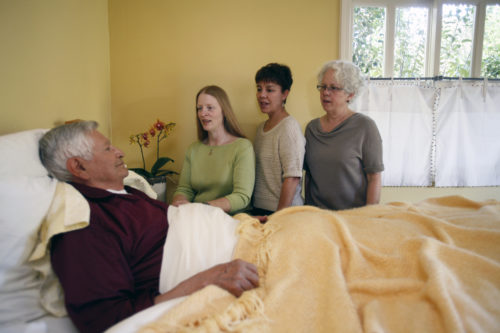 Members of “threshold choirs,” such as singers from the Napa Valley Threshold Choir and healing Moon Threshold Singers shown here, sing a capella in very small groups for people at the thresholds of life. Photo: Faith Echtermeyer

[Episcopal News Service] It all started with a song.

Twenty-three years ago, Kate Munger filled in as a bedside volunteer for a friend dying of AIDS. “All morning I did chores, and in the afternoon I was supposed to sit by his bedside. And he was comatose and agitated, and I was terrified,” she recalled. “I had no idea what to do, so I started singing. I’ve been leading community singing for many years, and there was a song in that period that comforted me, that gave me courage when I was afraid. I sang it for two-and a-half hours.”

Ten years later, in Berkeley, Calif., she started the first of what now are 108 “threshold choirs,” who sing a capella by invitation for people on life’s thresholds. The Threshold Choir network of primarily women’s choirs stretches across the country and as far as Australia and Cambodia, although most groups are in the continental United States and Canada. Members generally visit homes, hospitals, hospices and other locations in groups of two to four, singing softly in what Munger calls “lullaby voice.”

Although Threshold Choir is not a religious organization, members will sing a hymn if asked. Some choirs rehearse at Episcopal churches or have Episcopal members, and at least one choir in Illinois operates as a ministry in an Episcopal parish.

“This is prayer and not performance,” said Munger, the organization’s creative director. “I think people that are not religious have access to prayer just like people who are religious.” A threshold choir can provide support for those who don’t necessarily have a church to meet their beliefs and needs, she noted.

In Oregon, the Portland Threshold Choir rehearses at St. David of Wales Episcopal Church and sings for certain communal events as well as for individuals. On Dec. 20 at 6, the group will provide musical accompaniment for a Longest Night Service at the church.

While the holidays are portrayed as “a time of sweetness, joy, happiness, light,” this service acknowledges “that there are a lot of people for whom the holiday season has got the other side of that spectrum, too: grief, depression, despair, sadness, anger,” said Kri Schlafer, the choir’s director. The group sings while worshipers have a chance to light a candle and leave a photo or other reminder of someone who died or needs healing. The singers leave space within the music “where people can speak their name into the silence,” she said.

“Some people call it a Blue Mass,” said Rector Sara Fischer, adding that the singers “do an absolutely beautiful job helping us to create a really meaningful service every year.”

The group also sings at local labyrinth walks and at Portland’s 24-hour Chants for Peace, where groups connected with a variety of traditions each sing for an hour in a kind of musical relay to raise awareness of peace and peace-building.

And the choir sings for individuals or families, with groups of one to three people visiting homes, adult foster cares or hospitals, finding out how to be most supportive and singing the songs that would be meaningful to them.

“The intention is really to be companions on the journey, whatever journey they’re on,” Schlafer said. “We keep things fairly open in Portland in terms of wanting to honor a variety of thresholds.” Their first call was for a family with a new baby. They’ve also sung for a wedding – “pretty much any significant threshold crossing where that kind of presence is called for,” she said.

“We’re not a performance choir; we’re a presence choir,” said Schlafer. And, although the singers rehearse at a church, they are not connected to any particular religion, she said. She herself was raised Episcopalian and now follows the Zen Buddhist mindfulness practice of Thich Nhat Hanh.

The choir will sing secular songs or songs from a religious tradition, if that is what will be most meaningful to the listener, she said. “We want to meet them where they are.”

The choirs work from a songbook, with many of the songs sung as rounds or with harmony, said Georgia Duncan, who sings with the Flagstaff Threshold Choir in Flagstaff, Arizona. The choir rehearses at the Episcopal Church of the Epiphany, where she is a member.

“They’re mostly ones that have been composed for this situation. They’re very simple, spiritual, quiet songs,” she said. On one occasion, the church’s deacon called to say a woman at the hospice where she is chaplain wanted them to come and sing “Whispering Hope.”

“It’s not like a performance,” she said. “It’s singing very quietly.”

Afterwards, the individuals they sing for seem more relaxed, she said. “Sometimes we’ll sing in the living room area [of a medical institution]. People have remarked that it just seems to lend a note of peace to the whole facility.”

The work affects the singers as well. “I feel quieted and uplifted” after singing, Duncan said.

For her, the threshold choir is a ministry. “Ministries take all forms,” she said. “I try to be aware of all sorts of situations where one can be a minister without thinking of it in the traditional sense.”

In Burr Ridge, Illinois, the St. Helena’s Threshold Singers are not all church members, but the choir is among the ministries of St. Helena’s Episcopal Church, said Daryce Hoff Nolan, choir musical director and co-founder, who is a pastoral associate and diaconal aspirant at the church.

“When we rehearse, we start with a prayer intention, which is a little unusual,” she said. “We also have prayer before we go in to sing for someone to settle ourselves. It’s a little bit nerve-wracking, at least at the beginning. You want to be your best.”

Many of the members are or have been choral singers, she said. “You’re programmed to be perfect. This does not have to be perfect. We practice in order for it to be as good as it can be for the listener. … The intention is really what drives all of us together, to support and bring healing and comfort.”

They sing the music compiled by Threshold Choir, much of it written by choir members, some from folk sources, she said. “For anyone in Christian circles, particularly that’s been involved in meditation … I would liken it to Taize music. It tends to be simple and repetitive, [of a] gentle, lullaby nature.”

While they sing to people at the end of life, “it can also be people who are struggling emotionally and need support,” she said. As a music teacher by profession who has worked as a health-care chaplain in a hospital and hospice, “this for me is just the perfect blend … to be able to combine my two great loves.”

She recalled singing at the bedside of a parishioner in hospice and later being asked to sing at her memorial service. “The response that people give when they’re being sung to is just profound. This lady’s response was, she sat up in her bed and just smiled and looked at each one of us in the eye.”

On another occasion, choir members were doing a workshop for staff in a memory-care unit. As they were leaving, one dementia patient became very agitated, and the staff asked them to sing to her.

“At the beginning, she got a little more agitated, but there was a very interesting moment when she took a deep breath and just her whole countenance quieted,” Nolan said. “Actually her breath began to match our song, the breath in the song. It was incredible. And it was really the first some of my choir members had actually had an experience with a patient, so it just made them so acutely aware of what our work was going to do, and it also made them excited to do it.”

Early on, the group also sang to St. Helena’s member Chris DiBartelo, a close friend of Nolan’s with chronic back pain.

“At first, I kind of felt a little, I don’t know, awkward, because most of these people I knew,” she recounted. “Once the opened their mouths to sing, it was just unbelievably beautiful. It just took me to another place, mentally and emotionally. … It was extremely soothing.”

Using a slightly different approach, the Threshold Choir of New York City focuses its efforts on specific hospitals rather than visiting homes. “We don’t have cars. We’re in Manhattan, and it really is difficult to move around,” explained Sue Ribaudo, founder and director. “We decided to go where the people were, and that’s how we decided to be hospital-based.”

They began with Memorial Sloan-Kettering Cancer Center. “It’s a little different there, because it’s not hospice,” she said. “The patients that we’re singing to are just there temporarily in the hospital.”

They subsequently added singing on the hospice floors of two other hospitals. They try to visit each hospital once a week, with different song leaders directing groups of three or four people. They’ll visit a hospital floor and sing for different patients, if they wish. Most welcome the experience, she said. “They’re usually surprised. They’re used to getting flowers, not songs.”

The cancer patients often applaud, “which we don’t ask for,” Ribaudo said. “We’re not performance-oriented really so much as offering, I’d say, almost a prayer.

“Music is spiritual. It speaks to that part of us,” she said. “Many of the songs I think of as being very spiritual, that they speak to something beyond us. And also, we do have in our repertoire … some religious songs in case people request them or if we sense that something like that would be appropriate. No one’s against religion. We just want to be open, especially in New York City. It’s so multicultural, we want to be open to the fact that not everybody’s a Christian.”