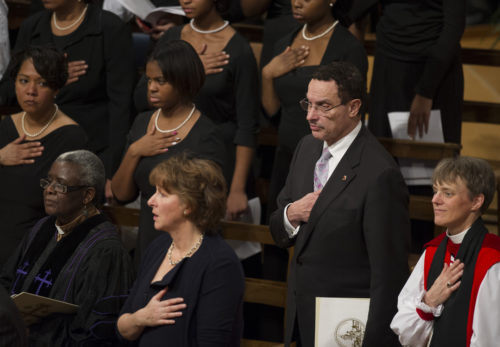 [Episcopal News Service] On the day when Nelson Mandela’s body began lying in state outside South Africa’s official seat of government power, an array of dignitaries gathered in the U.S. capital to say farewell to “a man of biblical stature.”

Rabbi Stuart Weinblatt, of Congregation B’nai Tzedek, compared Mandela’s story to that of the Old Testament Joseph, a man initially shunned who became a leader of an African nation and who later showed mercy to his captors.

Washington National Cathedral was the site of a, by turns, a somber, rousing and rollicking three-hour-ten-minute national interfaith service celebrating Mandela’s “life, legacy and values.” The service, which was live-streamed, included prayers and speakers from a number of religious experiences. The colors of South Africa and the United States were presented during the service, to the singing of each country’s national anthems.

Flags flying at half-staff across the United States showed, South African Ambassador Ebrahim Rasool said during the service, that for Americans “Nelson Mandela was both a part of the history and a part of their future.”

South Africa is “deeply honored” by the service, he said.

Biden said that the United States mourns with South Africa. Biden recounted his experience of the U. S. participation in the effort to eliminate apartheid. He also recalled meeting Mandela after he became the South African president and remembered his “moral courage” as being defiant of the “violent, repressive regime that had done so much violence against his people,” and also his loyalty to all South Africans that Biden said was “redeeming.”

Mandela, he said, taught the world that change, trust and reconciliation can all happen.

“So many places in the world need the lesson of Nelson Mandela,” Biden said.

Biden’s speech was followed by a short video and audio montage of Mandela’s words.

The Rev. Allan Boesak, director of the Desmond Tutu Center at Christian Theological Seminary and Butler University, preached the sermon. Boesak worked with both Mandela and Archbishop Desmond Tutu to eliminate apartheid and promote reconciliation.

After Mandela was released he taught “the difference between determination and bitterness,” Boesak said.

“He brought healing to our souls,” he said, repeatedly warning that the struggle for equality, justice, peace and reconciliation is not over.

“There is so much left for us to do,” he said, calling on those present to vow to continue the work and bringing the congregation to applause.

In a closing prayer Diocese of Washington Bishop Mariann Edgar Budde asked God to “let a portion of his mantle rest upon all of us, upon all people,” adding that “we pray and pledge to be worthy of it.”

Presiding Bishop Katharine Jefferts Schori said Mandela lived in the manner described by Rabia of Basra, an 8th century Sufi mystic, who wrote “Ironic, but one of the most intimate acts of our body is death, so beautiful appeared my death – knowing who then I would kiss, I died a thousand times before I died. ‘Die before you die,’ said the Prophet Muhammad. Have wings that feared ever touched the Sun? I was born when all I once feared – I could love.”

“It turns to us to walk from here,” Jefferts Schori said, echoing the prayer that she said Mandela used to pray, Anglican Archbishop Trevor Huddleston’s “Prayer for Africa.”

The presiding bishop echoed that prayer in her blessing, praying for God to bless the world and its leaders and people.

“Go in peace, be peace, make peace,” she said at the end of her blessing.

A copy of the order of service is here. The cathedral staged the service in partnership with the South African embassy. Music ranged from traditional African music to folk songs from the civil rights era, performed by Peter, Paul and Mary and Sweet Honey in the Rock, to and a Russian Orthodox Beatitudes by the Cathedral Choir and other Western sacred music. A rendition of :Siyahamba/We Are Marching in the Light of God” by the WPAS Children of the Gospel Choir and the Pacific Boychoir brought the congregation to its feet when Boesak stood up and began dancing.

Towards the end of the service there was a surprise appearance by American opera singer Jessye Norman who sang an a cappella piece combining “Amazing Grace” and “A Home in Glory.”

Mandela died Dec. 5 at his home and was memorialized Dec. 10 during an extraordinary gathering of tens of thousands of ordinary South Africans and world leaders in a soccer stadium in Soweto.

On the first day of three days of Mandel’s lying in state in Pretoria, the country’s capital city, the number of mourners overwhelmed authorities’ efforts to control the crowds. Mandela will be buried during a state funeral in the Eastern Cape village of Qunu, where he grew up.

Washington National Cathedral has historic ties to the people of South Africa. The Right Rev. John Walker, former dean of the cathedral and bishop of Washington, vocally advocated for the end of apartheid and demonstrated in front of the South African Embassy in 1985. The cathedral also maintains a very special relationship with the former Anglican Archbishop of Cape Town, South Africa and Nobel Peace Prize Recipient, the Most Rev. Desmond Tutu, hosting him for several special events over the years.