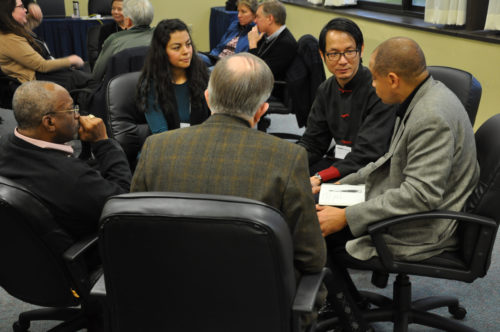 [Episcopal News Service – Linthicum Heights, Maryland] Beginning with a letter to the church planned for release this week, the Task Force for Re-imagining the Episcopal Church is ready to start getting increasingly specific about its suggestions for the future shape of the churchwide organization.

“I do feel we are just on the verge of a real burst of productivity because I think we’re gelling our ideas,” Katy George said early in the group’s Dec. 7 session here.

The letter to the church “which paints the holistic vision of where we’re going and starts floating very specific and edgy ideas out there,” according to George, who convenes the task force with the Rev. Craig Loya, will be followed by a series of more specific recommendations on which TREC wants feedback from the church.

The current draft of the letter is “pretty bold about what we are doing and thinking on, and will shake things up, hopefully, and will signal where we are going,” she said.

The letter will also explain the issue areas on which the task force has chosen to focus. During the second day of TREC’s Dec. 6-7 meeting here at the Maritime Institute, outside of Baltimore, the task force divided itself into new work groups, based on those focus areas, with the goal of refining the recommendations under consideration.

Draft versions of those recommendations would be released to church for comment on a bi-weekly schedule between mid-January and the end of February, according to a timeline laid out during the meeting.

“I think we’ve got a pretty sustainable work plan with a lot of momentum going forward,” Loya said.

And, it is likely that TREC’s letter will include a prayer for its work that the group has been using, along with an invitation for the entire church to join it in prayer.

The early 2014 publication schedule was set so that, at TREC’s next face-to-face meeting in March, the group can revise those draft recommendations based on feedback from the church.

“Some of our recommendations will need to be knitted so that we have a holistic vision for what the church actually is going to be and do,” George said during the meeting.

The recommendations, which were not detailed during the public sessions here, will include what the members suggest should happen to the churchwide organization, what specific recommends it will propose to General Convention, “and what parts we are actually just painting a vision that we hope other parts of the church adopts,” George said.

ENS coverage of TREC’s open session the morning of Dec. 6 is here. The group met privately during that afternoon and evening. The task force also closed a portion of its half-day session Dec. 7.

TREC’s Facebook page is here and it is here on Twitter with @ReimagineTEC, where the group is using #reimaginetec.

ENS coverage of the initial work of TREC is here. Coverage of the task force’s conversation with the Executive Council in October is here.