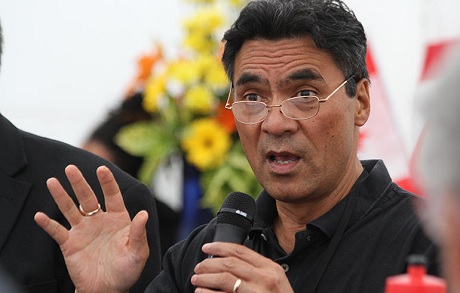 [Anglican Taonga] Last week’s meeting of the Anglican Indigenous Network in Christchurch could be remembered as a gamechanger.

The time when the AIN changed from being a fringe outfit given to telling itself tales of woe and issuing high-minded resolutions to no discernible effect, to becoming a body which is a serious and effective advocate for indigenous Anglicans at the highest levels within the Communion.

Prepared, if necessary, to make its case before outside bodies like the United Nations.

Robert, who is the Executive Officer for the Anglican Missions Board, convened the Aotearoa delegation to the Christchurch hui.

He’s been to five AIN meetings now. And at each previous one, he’d watched the AIN issue grand statements – which, in the end, achieved diddly-squat.

Here’s an example: two years ago, the AIN passed a resolution in support of Australian Aboriginal Anglicans long-held desire for a National Aboriginal Bishop.

That resolution went to the Australian General Synod – and it disappeared into a black hole.

No acknowledgement. No response. No nothing.

And no point, says Robert, in repeating the same performance.

The topic of a National Indigenous Bishop for Australia came up again at the Christchurch hui – it’s a hardy annual – but rather than pass yet another stirring resolution, the delegates at this AIN meeting did something about that kaupapa.

The six-strong Canadian delegation – which included three indigenous bishops – got alongside the Aboriginal delegation, and together they’ve struck up a formal “treaty”.

With the express purpose, in the first instance, of helping the Aboriginals reach their goal.

The thinking goes like this: The First Nations Anglicans of Canada are well along the way to self-determination.

They now have their own National Indigenous Bishop (Mark McDonald, who was at the Christchurch meeting).

And because the Canadians are still working through these changes, says Robert, they’re seen as the group that can best help the Aboriginal people achieve their goals.

“You think about Australia…. If the Canadians turned up there in force, and stood side-by-side with the Aboriginals, and talked about their own journey with their own people in Canada to the Australians – that would make quite an impact, don’t you think?”

Robert sees that partnership between the Canadians and the Aboriginals as the outworking of a mission principle:

“The principle is this – that God has what we need to achieve what God wants us to achieve .

Robert sees significance too, in the two resolutions that this AIN did pass.

There was the one (detailed here) which saw the AIN set up an Executive Committee which should ensure that the AIN doesn’t drop the ball between its two-yearly forums.

For a start, because he’s a bishop. The AIN hasn’t had a bishop as Secretary General before. And a bishop not only has clout, but also has the ability to network in the right circles.

Then, there’s the fact that we’re not talking about just any bishop.

He’s long been at the forefront of moves to get a fairer resource-sharing deal for Tikanga Maori in this church.

And he’s clearly got energy for his new international task, too. He’s already announced that he’ll be at the next meeting of the Anglican Consultative Council.

There’s talk too, says Robert, about holding the next AIN meeting in New York, so that it coincides with the next round of the United Nations Permanent Forum on Indigenous Rights.

“If the minority indigenous people in the AIN were to go along to the UN and say: ‘Hey. Our national churches can’t get their act together. Can you help us, UN?’ That’d be a little embarrassing for the national churches.

“But if necessary, I think that’s the sort of thing that Bishop John would be prepared to do.”

Bishop John’s election, though, is just one leg of the Executive Committee double.

The fact that Charles Hemana, the secretary of Te Pihopatanga, will be serving as the administrator for the AIN for the next two years is also critical, says Robert.

One of the main things the AIN executive committee intends to do is simply stay on the case.

It will finalise a charter, for instance, that nails down the AIN’s purpose and reasons for being.

The power of stories

In fact, the other resolution that this AIN passed spelt out that the first of those forums will be about story-telling.

In the past, says Robert, the AIN members were telling their stories, sure enough – but those stories never made it outside the tent.

Well, this AIN resolved to tell their stories to a wider audience – to their provinces, to the Communion at large, to the world.

“If we’re able to tell our stories beyond ourselves,” says Robert, “that establishes a research base. A base on which we can reflect and from which we can work out the way forward. What we will see too, is that we are not alone.”

There’s a time-specific goal, here, too.

The AIN wants a collection of these stories published – whether online, or in print – by the time of the next AIN meeting, which is two-year’s hence.

There was one final, intangible, aspect to this Christchurch AIN gathering.

It’s a quality that the AIN will have to draw on, no doubt, in the years ahead.

Robert named that quality during his poroporoaki (farewell) korero – and as he spoke, you could see heads gently nodding their approval, and tears being dabbed from cheeks:

“At all levels,” said Robert, “in our caucuses, around the table during plenary sessions – hearts were engaging.”

And that heart-to-heart engagement, you’d have to think, is as good a place as you could find for a new beginning.