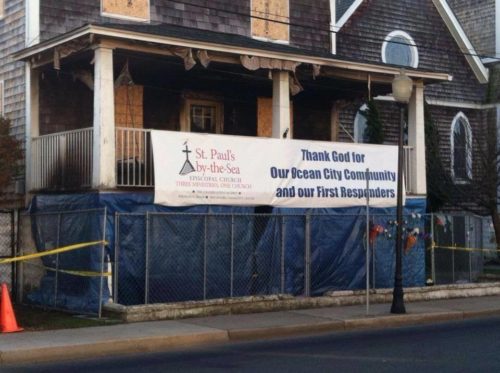 [Episcopal News Service] Ocean City, Maryland, investigators say they believe a local man bought gasoline, poured it on himself and set himself on fire before he ran into St. Paul’s by-the-Sea Episcopal Church Nov. 26, begging for help.

The man, John Raymond Sterner, 56, died on the scene and the church’s rector, the Rev. David Dingwall, died from smoke inhalation in the ensuing fire in the church’s old rectory building.

A female victim, whose name is not being released, was injured while attempting to leave the building during the fire, investigators said. She was treated by paramedics at the scene and ultimately transported to John’s Hopkins Bayview Medical Center, where she is still being treated. Ocean City investigators said her current condition is unknown.

The fire began when Sterner, with his clothes on fire, entered the church’s Shepherd’s Crook ministry offices, located in the 1923 rectory building that is part of the church’s property. Shepherd’s Crook provides food and clothing Tuesday, Thursday and Saturday mornings and on Nov. 26 volunteers were preparing for the pre-Thanksgiving food distribution.

Dingwall, who would have turned 51 on Dec. 26, was in his office on the second floor when the fire broke out. Fire Department personnel found him there unconscious as they conducted a “primary search” of the second floor of the building. The release said firefighters “experienced heavy smoke and heat conditions” during the search. Dingwall was treated on-scene by paramedics and transported to Atlantic General Hospital, where he later succumbed to his injuries.

The Office of the Chief Medical Examiner of Maryland ruled that Dingwall’s death was a homicide caused by smoke inhalation, the release said, and that Sterner’s was “suicide by way of thermal burns and smoke inhalation.”

The rector’s funeral was held Dec. 3 at nearby St. Peter’s Lutheran Church. The church had also hosted a prayer service the day after the fire for the members of St. Paul’s and the Ocean City community. A television station’s coverage of the fire and the prayer service is here.

The Baltimore Sun reported that the Rev. Heather E. Cook, canon to the ordinary in the Diocese of Easton, said Dingwall might have died while trying to save church records on a laptop from his office. Dingwall had been rector of the church for eight years.

The Sun also reported that court records show that Sterner had a lengthy arrest record in Ocean City for charges that included misdemeanor assault, alcohol violations and marijuana possession, though many of the charges were dropped. The last address listed for him in court records was an Ocean City trailer park; other court documents indicated that he was homeless. It was unclear whether Sterner was a food bank client, the paper said.

“Our community has experienced unimaginable tragedy,” Ocean City Mayor Rick Meehan said in the release. “Our community, as a whole, mourns the loss of Father David. All of our thoughts and prayers are with him and his family during this very sad time.  He will be forever remembered for making Ocean City a better place.”

The building where the fire occurred also houses the Red Doors Community Center, a St. Paul’s ministry. Four days after the fire an official of that group said in an e-mail update that “Father David embodied the spirit of loving service, and we feel confident that he would want us to move forward with the work of St. Paul’s By-the-Sea in all of the church’s capacities, despite the temporary loss of our facilities.”

ENS’ initial coverage of the fatal fire is here and here.