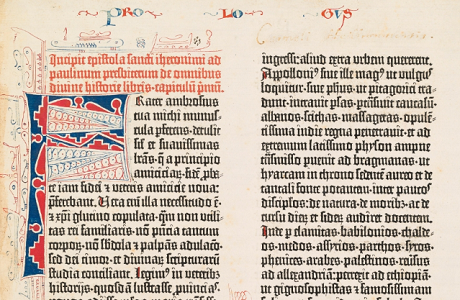 Gutenberg’s 1455 Bible, is among texts accessible thanks to the project run by Oxford and Vatican City. Photo: bav.bodleian.ox.ac.uk

[Anglican Communion News Service] Archbishop of Canterbury Justin Welby has welcomed the decision by the Bodleian and Vatican libraries to make available to the public digitized copies of ancient Bibles and Biblical texts. Speaking in a video to promote the launch of the project’s website, Welby said, “Where you can see these actual texts there’s a lifting of the spirit. “It inspires worship. By being able to have access to a digitized collection, this really opens the texts to a far wider range of scholars than have been able to get at them in the past and is of huge international significance as a resource.” He added he believed the practice of digitizing such texts would “indirectly have an impact on our liturgy of worship and practice of faith.” Europe’s first printed book, Gutenberg’s 1455 Bible, is among texts accessible on a  in the project run by Oxford and The Vatican City. New technology has enabled zoomable high-resolution images of the early manuscripts and books for research. The £2m project will digitize 1.5m pages over the next three years.