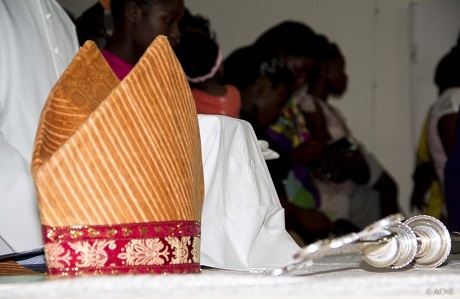 Despite passionate appeals by those dioceses ready to ordain women, the motion failed. Photo: Bellah Zulu/ACNS

[Anglican Communion News Service] The Church of the Province of Central Africa (CPCA) Synod has voted against the ordination of women following a heated debate on a motion seeking to allow individual dioceses ready to ordain women within the Province to go ahead.

The vote, which was carried out by the three Houses of Bishops, Clergy and Laity was only successful in the House of Laity where 14 delegates voted in favour of the motion as opposed to 10 that voted against.

Bishop Chad from the Diocese of Harare proposed that “Synod resolves that women be allowed into ordained ministry”.

“This matter has been discussed over the years at both Provincial and Diocesan levels,” said Bishop Chad. “There are women who have even decided to go to other countries to train and be ordained. [Therefore] we appeal to this Synod to allow those dioceses that are ready to go ahead.”

But Bishop of Northern Malawi, the Rt Revd Fanuel Magangani argued, “One person ordained in one diocese may get rejected in another thereby compromising the collegiality of the Province.” He added, “The ordination of women is not biblically backed and has also not proved to help the Church since inception in the 70s.”

However, during the debate session Provincial Youth Co-ordinator for CPCA, Fr Robert Sihubwa reminded the house that the Church of the Province of Central Africa is informed by tradition, scripture and reason and that the issue of women ordination should be addressed using reason.

A lay member from Harare, Patrick Mahari wondered why mothers and women in general are being discarded today despite having been the “first point of contact for the word of God for most the delegates present.”

“There is a lack of love for women in this room,” complained Doreen Nteta from Botswana. “People don’t want change and this issue is not about whether women are ready or not because in Botswana, we have been ready since the ’80s.”

“Women’s ministry is by far the biggest and not ordaining women would kill the Church in Botswana with only 11 priest priests having to cover the breadth and width of Botswana,” she said.

But despite the heavy debates and many passionate appeals from those dioceses that are ready to ordain women, the motion failed when it was subjected to a vote as required by the Synod Standing Orders.