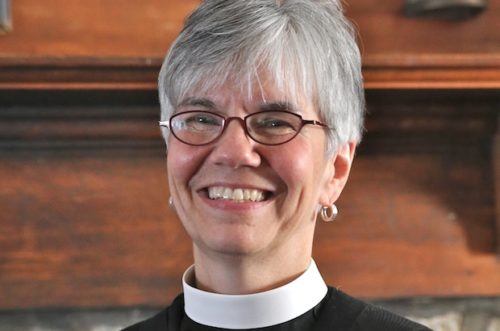 The Rev. Canon Melissa M. Skelton, canon for congregational development and leadership and rector of St. Paul’s Episcopal Church, Seattle, in the Diocese of Olympia, was elected by a special synod on Nov. 30, in Christ Church Cathedral, Vancouver. She succeeds Bishop Michael Ingham, who retired last August.

“Stunned,” “humbled” and “exhilarated” were her immediate reactions when she was elected on the third ballot after receiving a substantial majority of votes from the houses of clergy and lay, Bishop-elect Skelton told the Anglican Journal in a telephone interview.

Bishop-elect Skelton is no stranger to the Vancouver-based diocese, having conducted comprehensive trainings in congregational development and leadership for its clergy and laity since 2011.

It was a relationship that thrived and continued over the years — in 2012, she designed and facilitated New Westminster’s synod, a pivotal time for the diocese that had undergone a traumatic division over same-sex blessings that led all the way to the courts.

“I experienced both an interest in and a willingness to engage in a listening process that, from my perspective, was a first step towards the restoration of a sense of unity in New Westminster,” she said in her nomination statement. “This willingness spoke to me, in that these very same listening processes would be a cornerstone of my approach in the creation of unity that is part of the role of bishop.”

She has been nominated in two other episcopal elections before, one of which she withdrew from, saying she was not convinced it was the right one for her. Early this year, she came in second in the Diocese of New Jersey elections. That election “really helped me understand that they were not ready for me, put it that way. It was also good to discover that it wasn’t the right diocese for me,” she said.

With the Diocese of New Westminster, however, there was a sense of peace. What feels right about it? “So many things,” she says, in her deep, measured voice. “My experience in the diocesan school for leadership and the kind of chemistry with the people and participants – that was very telling to me,” she said. Another big factor was her connection to Bishop Ingham. She first met him in 1994, when he was a newly minted bishop and she was running the training for new bishops at The General Theological Seminary (GTS), an Episcopal Church seminary based in New York City.

And then there’s the matter of geography. Skelton has found an affinity with the west that has been “profound, very freeing and very compelling.” Nine years ago she moved from a small coastal parish in Maine to the diocese of Olympia, also known as the Episcopal Church in Western Washington. Initially she was “perplexed” by the transition. The west had “a different character, a different style of spirituality,” and the sun and the water appeared on a different side.

But when she was nominated in the two U.S. episcopal elections, both of them in the northeast, Skelton said she realized that as much as she loved living in the east, it no longer felt like home.

New Westminster has a “common spirit” with the dioceses of Olympia, Oregon and Spokane, and it “really feels like a wonderful match for who I am now,” she said. When she became a nominee to its election and responded to questions sent by the search and nominations committee, Skelton said, “The more I answered, the more I felt connected.”

Coming into a highly visible diocese in Canada will not be a daunting prospect for Skelton, who was vice-president for administration at the General Theological Seminary when it was going through “a difficult time around slightly different issues.” In late 1993, the GTS had to reconsider its housing policy after a complaint was filed with the NY City Commission on Human Rights alleging discrimination on the basis of marital status and sexual orientation.

“I learned what it was like to simply do the work you’re given to do in many ways. For me, it feels like being faithful in highly visible situations, keeping focused on the call of God,” she said.

Congregational development and relationship building will be one of her key priorities as new bishop, said Skelton. She is eager to start building relationships “with this new group of people who have been so very enthusiastic and kind to elect me — a woman, a Canadian enthusiast and American-born person who deeply cares about their parishes,” she said.

She is also most excited about the cultural diversity of Vancouver. “It’s an amazing place,” she said, adding she has a deep desire to find out how the church engages the diversity of these cultures.

Born in Columbus, Georgia, to a military family of four children, Skelton had lived mostly in southeastern America and in Germany.

Skelton became an Episcopalian in her twenties “from no real church background,” she said in her nomination statement.

After she received a Master of Divinity from Virginia Theological Seminary, she became a priest in 1993, while she worked as a brand manager at Procter & Gamble.

She later moved to GTS where, aside from overseeing the seminary’s operations, she taught courses in Christian Education and oversaw the College for Bishops.

Skelton, who also has a master of English and a master of business administration, later left GTS to become vice-president of consumer and brand development, communications and advertising of Tom’s of Maine, which sells “natural toothpaste, deodorant, soap and more.”

According to the Diocese of Olympia website, she has an adult son, Evan, who lives with his wife, Emily, and their two sons, Austin and Evan, in Washington, D.C.