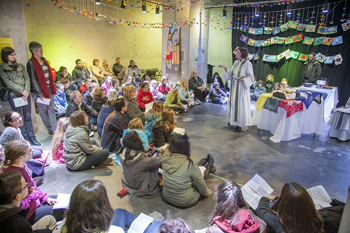 The Rev. Monique Stone preaches deep below the earth in the Diefenbunker, near Carp, Ontario. Photo: Allan Joyner Photography

[Anglican Church of Canada] About 130 young people gathered in a heavily fortified bank vault in the depths of the “Diefenbunker” near Carp, Ontario, on Nov. 17, 2013. They were there for a Eucharist and sermon comparing the pacifism of Christ and the “redemptive violence” of the bestselling novel and movie The Hunger Games.

The once-secret underground bunker near Carp was built more than 50 years ago to protect the Canadian government from nuclear attack.

“The Hunger Games is a book about juxtaposition,” said the Rev. Monique Stone, organizer of the service and incumbent of the Anglican Parish of Huntley, in her sermon. “It’s a book in which we see a community in dire poverty pushed up against a community of privilege¬ — in which we hear about a community that is starving, and [another] that has so much excess that at times they actually want to make themselves sick so they can fit in more food.”

“Christians… are here to notice it, and here to do something about it. We’re called to go out into the world and make a difference.”

Stone gave participants an opportunity to make that difference by connecting them with “Fred Says,” the new food security campaign from the Primate’s World Relief and Development Fund (PWRDF).

“It made sense to me that there be an offering for some food justice-related ministry,” said Stone. “It seemed like a natural fit.” Participants also received a Fred Says package after the service.

The Very Rev. Shane Parker, dean of Christ Church Cathedral in Ottawa, was the main celebrant at the Eucharist, which brought to a close a seven-week course on the spirituality of The Hunger Games.

Stone doesn’t plan on doing the popular service again, but would be happy to see others run the service in their own parishes.

“The Hunger Games story is very relevant. There was more stuff to discuss than we could cover in the weeks of our study leading up to this Eucharist. If anyone wanted to do this service themselves, I’d be more than happy to share the liturgy.”