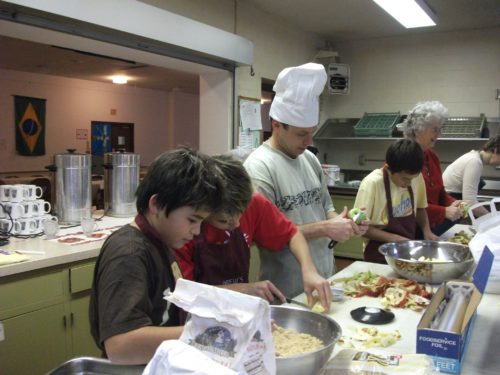 [Episcopal Diocese of Central Pennsylvania] The Community Café at St. Andrew’s Episcopal Church in State College, Pennsylvania, was born out of a desire by parishioners to fill the outreach void that was left when the State College Area Food Bank, which was housed at the church for many years, outgrew its space. For the past five years, St. Andrew’s also has provided a free Thanksgiving Dinner – on Thanksgiving Day.

It began the first year the café served food, even when that food was simply soup and bagels. “We had a discussion that included all the negatives,” said Ron Rovansek, St. Andrew’s parishioner and café volunteer. “We knew volunteers might be lacking because of family commitments. We didn’t know if patrons would come in to eat. We weren’t sure where the food was going to come from. But that discussion lasted about 10 minutes.”

It was a leap of faith, and one that was rewarded. The turnout was enormous. They had more volunteers than they could imagine. Patrons thanked them for being open on a holiday; volunteers talked about how meaningful the experience was and how they were happy to have a place where they could start their kids on the road to community service.

Throughout the year, the food comes mainly through donations from the parish and local grocery stores. There are regular volunteers who pick up bread, salad greens, vegetables and various desserts, and Trader Joe’s donates twice a week. For Thanksgiving, parishioners donate turkeys and desserts.

The Community Café “takes its name very seriously,” added Rovansek. “If you were to walk into Canterbury Hall on any given Thursday, you would find a bustling, lively group of patrons who look forward to seeing each other and volunteers who do not want to be known for merely shoving plates of food through the kitchen window. The regulars know each other, but what makes it really special is that new folks are heartily welcomed. With the mission of food and companionship in mind, the need for those things doesn’t go away over the holidays. In fact, loneliness and feelings of lonesomeness can increase, and so we feel blessed that Thanksgiving every year falls on a Thursday. There was never a question of the café not operating on Thanksgiving Day.”

— Linda Arguedas is canon for events and communications in the Diocese of Central Pennsylvania.