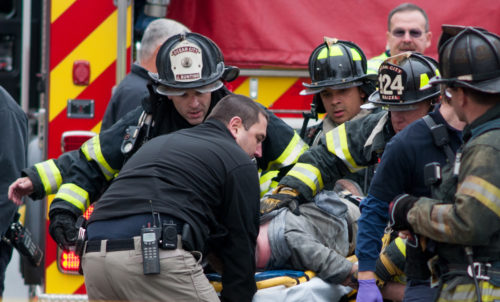 [Episcopal News Service] Instead of celebrating a Thanksgiving Eve Eucharist on the morning of Nov. 27, the members of St. Paul’s by-the-Sea Episcopal Church remained stunned after a fire at the church the morning before killed two people, including their rector.

The Rev. David Dingwall, who would have turned 51 on Dec. 26, died hours after the fire occurred in the office area of the church at 3rd Street and Baltimore Avenue in Ocean City, Maryland. 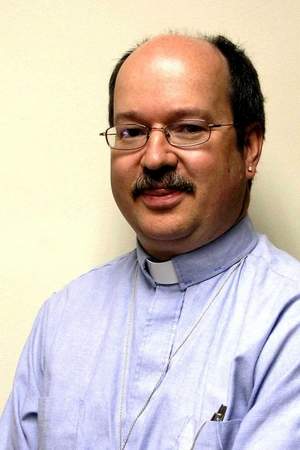 The Rev. David Dingwall, who would have turned 51 on Dec. 26, died hours after the fire occurred in the office area of the church at 3rd Street and Baltimore Avenue in Ocean City, Maryland.

Diocese of Easton Bishop James “Bud” Shand told the Episcopal News Service in a telephone interview Nov. 27 that he had been told a person whose clothes were on fire ran in from the street to the church office. The Town of Ocean City in a press release issued midday on Nov. 27 identified the man as John Raymond Sterner, 56, of Ocean City.

Sterner “embraced” a woman volunteer who was there preparing to open up for the Tuesday food distribution, Shand said. A man in the office “tried to kind of knock him down so he would roll and put him out but he couldn’t get near him because the heat was too intense.”

The man who tried to stop Sterner was also burned, Shand said.

Officials did not confirm those details in their release and did not identify the woman who is still being treated for burns or the other man. Sterner was declared dead at the scene. No other information about Sterner was released.

Dingwall was in his office on the second floor when the fire broke out, according to Shand, and suffered smoke inhalation. The town said that Dingwall was found “during a primary search of the second floor of the building, where they experienced heavy smoke and heat conditions.”  The unconscious priest was quickly removed from the building, treated on the scene by paramedics and transported to Atlantic General Hospital, where he later died, the town said.

While the exact cause of the fire is still under investigation, the press release said investigators suspect an accelerant was involved in the quick spread of the fire.

“Initial damage assessments indicate significant fire damage of the first and second floor office, in addition to smoke and overhaul damage throughout the first floor of the rectory building,” the town said in its press release. 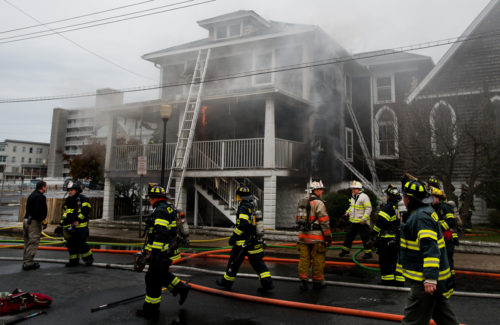 Ocean City firefighters work to extinguish a blaze in the rectory of St. Paul’s by the Sea Tuesday morning. Grant L. Gursky

A number of area Episcopal priests responded to news that St. Paul’s was on fire, Shand said. The priest from Church of the Holy Spirit, another Ocean City Episcopal church, came to the scene to minister to responders, according to the bishop, and others went to the hospital were the victims were taken. One of those priests anointed Dingwall that afternoon, Shand said.

Shand, who came to the church after the fire, was in route from visiting one burn victim at another hospital to Atlantic General Hospital in Berlin, Maryland, to see Dingwall again when he received word that the priest had died.

The parish is “shocked” and “reeling” the day after the fire, the bishop said. The junior warden was meeting with the church’s insurance company this morning to discover the extent of the damage. The town said the church had “minimal to no significant damage.” News reports said the sanctuary was intact but had suffered smoke damage.

“We don’t know what goes through people’s minds, why people do what they do and why they inflict pain and hurt on other people like they do. Why did that man do that? I don’t know,” Shand said. “But we have to live with the good and the bad, the dark and the light … there will be resurrection experiences out of this. It might be hard, but we will move on. This congregation will become more resilient as time goes on.” 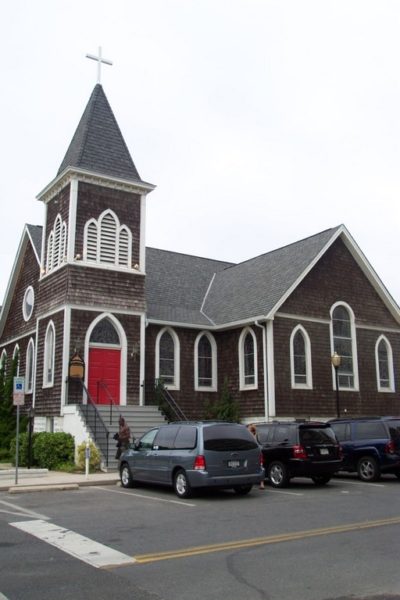 St. Paul’s By-the-Sea in Ocean City, Maryland, before the blaze.

The Gothic Revival wood-shingled St. Paul’s Church dates from 1900 but, Episcopal services began in Ocean City in 1878, just three years after the first hotel opened on the island, according to a history on the church’s website.

“We mourn the loss of our rector and priest, Father David Dingwall, and pray also for everyone affected,” including the other unidentified victims, one who died and one who suffered life-threatening injuries, the community center said on its Facebook page.

The town said the community center experienced “minimal to no significant damage.”

Much of Ocean City was mourning as well. St. Paul’s parishioners, as well as other members of the Ocean City community, will gather for a prayer service at St. Peter’s Lutheran Church on the evening of Nov. 27. Shand said he and the Rev. Heather Crook, the canon to the ordinary, will be at that service “to be there for the folks of St. Paul’s-by-the-Sea.”

Amy Morgan, St. Peter’s office manager, told Episcopal News Service in a telephone interview that one of the Lutheran church’s parishioners was a first responder to the scene and was “pretty shaken up by it all.” Out of her conversation with that woman, Morgan said, came the idea from her and Pastor Gregg Knepp for St. Peter’s to offer to host a prayer service for St. Paul’s members and “for the community just to come out a show our support.”

Morgan contacted the Rev. Penelope Morrow, St. Paul’s deacon, to see if the parish would want to have such a service, and she said she also called Cook. “We didn’t want to be intrusive; we didn’t want to step on any toes. We just wanted to show our love and support,” she said.

The service will include a “love offering” to be given to the diocese for use at St. Paul’s, Morgan said.

Morgan said the hours after the fire have been “surreal” because, while one hears on the news about “bizarre” things like this happening elsewhere, “you never think it’s going to happen here.”

“It made me go home and hug my daughter tight,” said Morgan, who often had to pause to compose herself during the interview.

Ocean City is popular resort town located at the southern tip of Fenwick Island, a barrier island off the coast of Maryland that stretches north along Delaware. It has a year-round population of about 7,100 people, but swells to more than 300,000 in the summer. The town is “tight-knit,” Morgan said, and area churches often come together to serve community needs.

“When there’s a need, you really see the heart of this community come out,” she said. “That’s why I love this place.”

“We are thankful for the numerous agencies that assisted us during our response and especially thankful for all of the public safety personnel who helped prevent this fire from claiming more lives,” he said in the town’s press release.

St. Peter’s Lutheran Church and many other area churches have offered their worship space to St. Paul’s, Shand said, and near-by St. Mary Star of the Sea-Holy Savior Roman Catholic Church offered to host the priest’s funeral. That service will probably occur sometime early next week, the bishop said, depending on when law enforcement officials release of Dingwall’s body.

Staff at the Office of the Chief Medical Examiner of Maryland in Baltimore are conducting autopsies “to determine the manner and cause” of Dingwall’s and Sterner’s death, the town said in its release.

Shand said the entire Episcopal Church and other denominations have been “very generous” in their offers of help and prayers.

Dingwall moved to the Eastern Shore of Maryland in 2003 after serving three parishes in the Canadian province of British Columbia where he grew up. He was received into the Episcopal Church from the Anglican Church of Canada in 2005, according to his biography on the church’s website. “He is particularly thankful for this time as the people of the parish provided him with a gracious introduction to life in The Diocese of Easton, The Episcopal Church and, perhaps most importantly, to life on the Eastern Shore,” the biography says.

Dingwall is survived by his wife Brenda, their three sons and their dog Minnie. Their children all live in the area, according to Shand.

“Everyone is in shock. Everyone is devastated for his family,” Amanda Cropper, a vestry member who’s in charge of the church’s building and grounds, told the Associated Press. “He was a strong advocate for those who are not lucky in life.”

She added: “He’ll be greatly missed, but for me it will be on the more personal side. … He had a devastatingly wicked sense of humor.”

The congregation was “devoted” to Dingwall and his leadership, the bishop said, and the priest “reached out to the community in big ways.”

“David brought home to them the commands of our Lord” to feed the hungry, to give shelter to those who need it and give clothing and water to those going without.

St. Paul’s had a “tremendous ministry to the misplaced, the displaced people of Ocean City and there’s a lot of them,” Shand said.

For years, the parish has served a Christmas Day dinner and last year’s meal hosted between 600-700 dinners with about a 1,000 meals served take-away style, according to Shand.

The fire, especially coming just two days before Thanksgiving, “will leave an indelible mark in the minds of Ocean City, St. Paul’s” the bishop said.