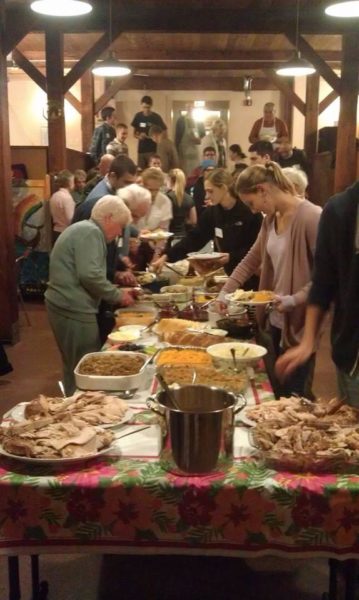 [Episcopal Diocese of Rhode Island] At its monthly “Feed a Friend” dinner on Nov. 19, St. Augustine’s Church in Kingston fed 80 people, at least 40 of whom were current University of Rhode Island students. St. Augustine’s is located on the URI campus and started the “Feed a Friend Dinners” last Shrove Tuesday when parishioners volunteered to cook students their favorite home cooked meal if they brought a friend. The first dinner had 5 students.

For St. Augustine’s the jump in numbers is a great success. Over the past year they’ve made it their mission to better reach out to the college students around the church, to provide for their needs both spiritually and physically.

Early on they recognized that two major issues for the students are hunger during breaks (read how they’ve tackled hunger here) and homesickness.

At last night’s dinner there was even a prospective URI student or two in attendance. Some of those who were visiting the campus that day had been sent to the dinner by the University’s LGBTQ group. According to Deacon Jan Grinnell one student even said that he now really wants to come to URI. Knowing there is a loving, supportive Episcopal community on campus seems to have made a big impression.

It isn’t just the students whose spirits are lifted by this ministry. The whole congregation is feeling the joy of sharing and caring.

Carol Miro, the parishioner who coordinated this last dinner, said in an e-mail to Grinnell: “So many contributed in so many ways and the energy in the room was palpable. Students and others are telling us how much they feel unconditional love at St. A’s. We are acting on our mission!”

This was the last “Feed a Friend” for 2013, since the students are moving toward exams and winter break. St. Augustine’s says that the next one will be January 28, and that the students have voted the meal to be “Soup and Stew.”