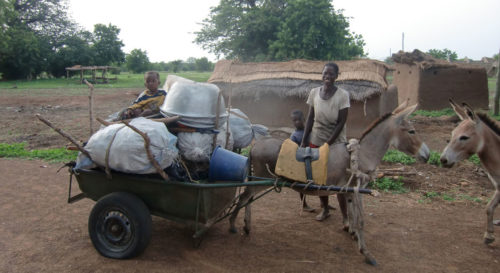 Episcopal Relief & Development’s pilot project in Ghana will give women smallholder farmers the opportunity, though micro-financing, to acquire a donkey, a plough and a cart, as well as improved seeds and fertilizer, through affordable credit. Participants also will receive skills training in donkey care, farm business management and agricultural techniques. Photo: Episcopal Relief & Development

“It is a tremendous honor for Episcopal Relief & Development to receive the Grand Challenges Explorations grant from the Gates Foundation,” said Rob Radtke, the agency’s president, in a press release from Episcopal Relief & Development. “Innovations such as the donkey plough can increase farming efficiency, allowing women to increase their harvests and devote the time they save to other endeavors such as building skills and marketing produce. Empowering women economically helps bring all members of a community into fuller participation in the creation of a brighter future for their families.”

Radtke told ENS that, for ADDRO, the grant is a “huge feather in their cap.”

Receiving the grant, Radtke said, “shows that we’re always trying to be innovative and creative in coming up with solutions to intractable problems.”

To receive funding, Episcopal Relief & Development and other Grand Challenges Explorations winners in this most recent round of grants awards demonstrated in a two-page online application a bold idea in one of five critical global heath and development topic areas (Round 11 here) that included agriculture development, development of the next-generation condom and neglected tropical diseases, the press release said.

Episcopal Relief & Development’s project will promote an innovative, labor-saving strategy for women smallholder farmers – the donkey plough, according to the release. Most women farmers in sub-Saharan Africa do not have access to oxen for farming and are consigned to grueling and time-consuming labor using hand tools, according to the press release. Women’s access has been limited by cost, cultural taboos and the difficulty of managing oxen due to their large size. In the 1990s, a plough was developed for use by a single donkey, which would be more affordable and practical for women, and would save 18 or more days of labor per hectare of land versus using a hand hoe alone. The donkey plough has not been widely popularized to date, however, and cost is a major obstacle.

Episcopal Relief & Development and ADDRO will provide women smallholder farmers the opportunity to acquire the necessary equipment, as well as improved seeds and fertilizer, through affordable credit. The project will test two credit options through a revolving loan fund designed to be financially sustainable, and participants also will receive skills training in donkey care, farm business management and agricultural techniques. The loans will cover the cost of a donkey, a plough and a cart, enabling the owners to earn extra income and repay their loans more quickly by renting the donkey set to others for farming and transporting goods.

The organization’s programs with ADDRO in Ghana help farmers feed their families through improved agricultural techniques, empower women through micro-finance services and train health volunteers to protect their communities from malaria, HIV/AIDS and tuberculosis. That sort of “integrated development,” Radtke said, is typical of the sort of work Episcopal Relief & Development tries to support whenever possible.

Grand Challenges Explorations is a $100 million initiative that was launched in 2008. More than over 850 people in more than 50 countries have received grants. The grant program is open to anyone from any discipline and from any organization. Initial grants of $100,000 are awarded two times a year. Successful projects have the opportunity to receive a follow-on grant of up to $1 million.

Episcopal Relief & Development is one of two faith-based organizations receiving grants in this round. The other is the Mennonite Economic Development Associates, which proposed another pilot project involving women farmers in Ghana. The challenge both agencies took on is here.

The grant, Radtke noted, is “a real vote of confidence in faith-based organizations.”