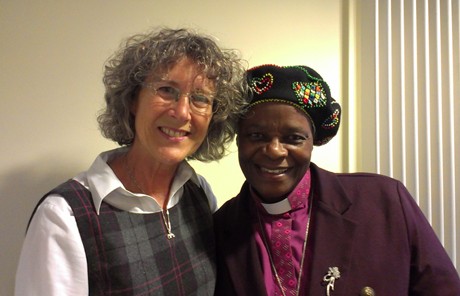 The Rt. Rev. Ellinah Wamukoya is the bishop of Swaziland. She was born in 1951 in Swaziland though she spent a good part of her childhood in South Africa. She completed her university education in 1974 before proceeding to Holland for her postgraduate education.

During the early years of her career, she worked briefly as a teacher and later as a town planner. At the time of her retirement as a civil servant, she had risen to the level of town CEO in the Swaziland capital Manzini and was a holder of a master’s degree as well as several other postgraduate diplomas.

Q: Can you share with us your journey towards becoming bishop?

A: My becoming a bishop was really ordained by God because, despite having a passion for town planning, I got a calling to come and work in the Church. I first become a Mother’s Union member. An elderly priest encouraged me to get into ministry and even asked me to preach at one time.

I started as a lay minister in the Church and got encouraged to do the Theological Education by Extension (TEE) course for ministry. But perhaps the turning point for me was when I saw children playing on a Sunday when I was going to Church. That touched me because I thought that they were not going to Church because their parents did not know Christ. That’s when I felt the real calling to go into ministry.

In 2005, I was ordained into the deaconate, before becoming a priest in 2006. For me, that was like the end of the road because I was happy and loved the work. I put in my best and even retired from my secular job. I was convinced it was time for me to rest. But then God’s people felt that God wanted me to be their next bishop.

Q: Did it ever occur to you that you would become bishop some day?

A: To start with, it had never crossed my mind that I would even become a priest some day. But when God called me to become a priest, I agreed. When our bishop retired, many people approached me about becoming bishop and it was a hard decision for me to make.

It was very hard for me to accept the bishop ministry. I wondered why of all people, God had decided to call me. I did not feel adequate for such a ministry. But a lot of people approach me and said that God had shown them during their prayers that I would become the next bishop. But even then, it took a lot of prayer. My colleagues and I went into [a time of] prayer for about two months so that we could be sure about God’s call.

Earlier in 1992, the Anglican Church of Southern Africa had already voted to allow women to be ordained into the priesthood. At the time, we did not know that was a door-opener for women to become bishops some day.

Q: How did you feel when you were announced as the next bishop considering that you were up against male candidates with more experience than yourself?

A: It was a feeling of humility. I was really humbled. It just made me realise that God’s thoughts are not like man’s thoughts. God will use those vessels that everyone may have discarded and use them for his work.

I asked that the will of God should prevail because I was aware that the other four candidates were very senior and capable priests.

Q: You have now reached one year as the bishop of Swaziland. How would you describe your experiences so far?

A: At the beginning even the word ‘bishop’ was intimidating to me. It took some bit of time before getting used to it. There has been lots of co-operation within the diocese. It’s not about power, but the will of God. I am happy that God has been with us as a diocese.

We will soon be unveiling our strategic plan, which is a management tool for us. I have also been able to do a lot of other things including confirmations. However, I have tried to emphasise the issues of transformation and not just reciting the catechism. I would like to see transformation in the Church and my message has always been about a renewed church. It’s been a message of being Anglican but doing things differently.

I have also been looking into ways and means of making the Church sustainable. I believe that as we grow spiritually, we should also become sustainable. Donors are going, as are the days of freebies. God has given us assets and they need to be used for the benefit of the Church. We want to improve the lives of the clergy and all the people of God.

We are also taking education as a priority. We are making sure that our presence is felt in our Anglican schools.

Q: What are your words of advice to women across the African continent especially as regards taking up leadership positions?

A: Women should believe in themselves because God did not create them to be lesser human beings. We should never look down on ourselves. God gave us brains and many other things that men have. However, women should not try to be men. A Biblical story in Judges tells of a woman who delivered her people from persecution from Abimelech.

She used a millstone to defeat the enemy. She used something that is used by women to produce food. She didn’t use any other weapon but used whatever God had given her. I am not talking violence here or that women should be aggressive but that we can use whatever God has given us for the betterment of mankind.

Women have the compassion, the love, the care, but much more importantly, women are brave.