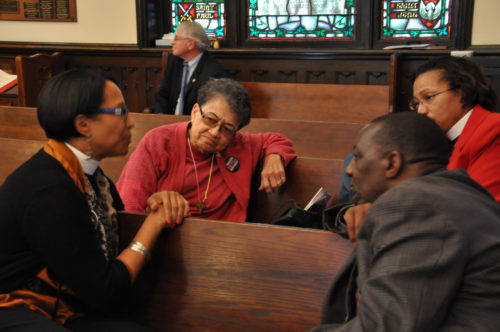 Four participants talk about what they have learned during the Nov. 15-16 “Fifty Years Later: The State of Racism in America” gathering at the Diocese of Mississippi’s St. Andrew’s Episcopal Cathedral in downtown Jackson. Photo: Mary Frances Schjonberg/Episcopal News Service

[Episcopal News Service – Jackson, Mississippi] Judging by the report-back from three rounds of small-group discussion, participants in the Nov. 15-16 “Fifty Years Later: The State of Racism in America,” left here with hope and renewed dedication.

Navita Cummings James, chair of the Executive Council Committee on Anti-Racism, and the Rev. Angel Ifill, the church’s missioner of Black Ministries, moderated the gathering’s final discussions during which participants were asked to consider the top three things they had learned or had had reinforced during the gathering, how they would personally promote racial healing and understanding, and then how they would work to combat institutional racism.

One group’s spokesperson said its members agreed that “the universality of pain” had been reinforced by the conversations of the past two days.

“We need to have patience with those who would not come to a forum like this,” said one participant, reporting on what her small group had learned.

In terms of promoting racial understanding and healing, another participant said his group agreed that it would be important “to trace out your own narrative or your own trajectory of racial experiences [because] it’s going to help you reach other people if you are clear on your own story.”

More than one participant suggested that the conversations begun during the gathering needed to be continued, in the words of one, “whether that’s in our individual churches, the chamber of commerce or other groups that we may be a part of.”

One of the younger participants noted that because of the gathering “even for someone in our group who has been in the movement for a long time, there is fresh hope.”

In his closing remarks, Diocese of Mississippi Bishop Duncan Gray III noted that “more than a few folks have wondered – some of them out loud in my presence – about the appropriateness of a conversation on racism being hosted by the Episcopal Church in Mississippi.”

Gray said he “would be first to admit the wolf has not laid down with the lamb” in his state. 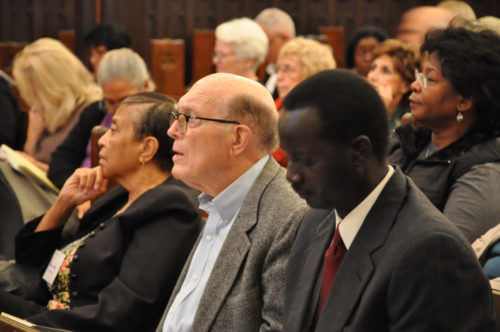 The Rt. Rev. Duncan Gray Jr., the seventh bishop of Mississippi, son of the fifth bishop of Mississippi and father of current diocesan Bishop Duncan Gary III, listens to a presentation Nov. 16 on the second day of the “Fifty Years Later: The State of Racism in America” gathering at the Diocese of Mississippi’s St. Andrew’s Episcopal Cathedral in downtown Jackson. Photo: Mary Frances Schjonberg/Episcopal News Service

“Nor have we been transformed in an oasis of freedom and justice 50 years later and yet, yet, I am hopeful precisely because I am a child and a native son of this conflicted, heroic, tragic and often violent state,” he said.

“I am hopeful that an honest look at our past and a willingness to listen to stories of individuals and communities that we had never known or wanted to know will move us in important ways toward healing, maybe even reconciliation.”

The bishop said he was hopeful because “as I unpack the layers of racism deeply embedded in my own soul – often taking the form of very personal, sometimes unconscious racial profiling within my own soul – I have thousands of fellows travelers across this state, some of whom are here, who are doing that same very painful, very scary, very life-giving work.”

Gray challenged the rest of the church and the country “if even Mississippi, a state sweltering with injustice and oppression 50 years ago can do this, why can’t others?”

The Nov. 16 plenary sessions, workshops and discussions formed the second of two days of work examining the state of racism in the U.S., how far the country and its people have come, and considering the work yet to be done. 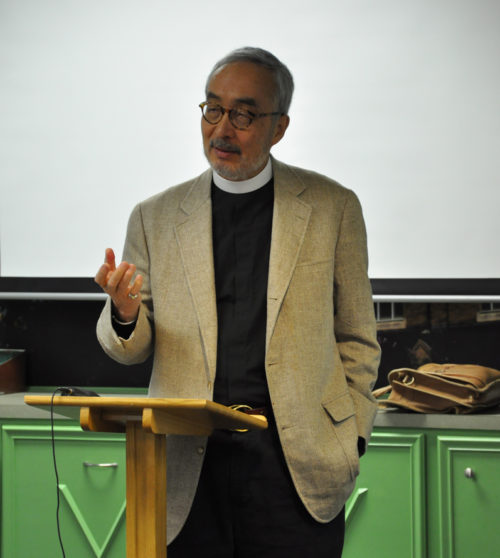 The Rev. Jim Kodera, a native of Japan and the first Asian-American ordained a priest in the Diocese of Massachusetts, tells a historical narrative of the plight of Asians in America and of Asian Americans during a Nov. 16 workshop that was part of the “Fifty Years Later: The State of Racism in America” gathering at the Diocese of Mississippi’s St. Andrew’s Episcopal Cathedral in downtown Jackson. Photo: Mary Frances Schjonberg/Episcopal News Service

During one of six concurrent workshops that morning, the Rev. James T. Kodera, Wellesley College professor of religion and rector of St. Luke’s Episcopal Church in Hudson, Massachusetts, presented a “historical narrative of the plight of Asians in America and of Asian Americans.” During a subsequent discussion with those who attended the workshop, he suggested “there have to be multiple histories. We have to reject any notion of established history, official history because every history is selective and purposive.”

“You have to together write new histories,” said Kodera, a native of Japan who was the first Asian-American to be ordained in the Diocese of Massachusetts. “I think it is our obligation to have the courage to write alternative history so that we can embrace multiple histories” in order to see a more complete picture of the country.

The State of Racism gathering was sponsored by the Episcopal Church and the Diocese of Mississippi and held at St. Andrew’s Episcopal Cathedral in downtown Jackson, Mississippi.

ENS coverage of the gathering’s opening session on Nov. 15 is here. An ENS series of video reflections from the conference are here.

The Nov. 15 webcast, which included a keynote address by Presiding Bishop Katharine Jefferts Schori and two panel discussions, is available for on-demand viewing here. A discussion guide developed for the forum is available.

A related bibliography and other resources are available here.