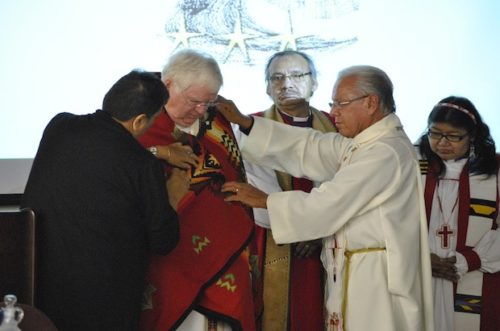 [Anglican Church of Canada] A hush fell in the room as aboriginal bishops, clergy and elders wrapped a sunset red Pendleton blanket over Archbishop Michael Peers, former primate of the Anglican Church of Canada, and prayed over him.Each iconic woolen blanket traditionally made by the native people of Oregon has a story, and that given to Peers was about “The Evening Star,” who helps his tribe.

The powerful moment was part of a commemoration, held Nov. 16, of the 20th anniversary of the Anglican Church of Canada’s landmark apology to indigenous people for the role that it played in the Indian residential schools system, which took native children from their homes as part of the government’s policy of assimilation. The Anglican church operated about 30 of the federally-funded schools across Canada.

A video of the Minaki gathering was played to CoGs members, after which aboriginal and non-aboriginal Anglicans paid tribute to Peers, saying that his apology paved the way for healing and reconciliation to begin.The tribute to Peers, now 79, was held at the first meeting of new members of Council of General Synod (CoGS), to which participants and witnesses to that apology were invited to attend.

When Peers apologized 20 years ago at the National Native Convocation in Minaki, Ont., he “set this church into a trajectory toward healing and reconciliation from which we must not and never will turn back,” said the church’s current primate, Archbishop Fred Hiltz.

Looking back at that event, Archdeacon Sidney Black, chair of the Anglican Council of Indigenous Peoples (ACIP), who was present at that historic gathering, said:  “I believe that God sent [Peers] in the midst of that gathering to pray, to listen, to offer hope and begin that inaugural journey of healing for First Nations people in the Anglican Church.”

In that gathering, many spoke for the first time about the abuses they experienced while attending the residential schools as children, he said. “We identified with each other’s stories, we changed and our vision was broadened,” said Black. “It was a defining moment when it seemed everything would begin to change for the good.”

The 16-sentence apology delivered by Peers was “sincere, honest, humble [and] heartfelt,” said Black. “Michael, your grace, you listened and you heard words of courage and words of victimization. Your grace, your spirit-filled words and the apology… opened the gates of heaven for a broken people to receive healing.”

In his emotion-filled tribute, Black also offered an apology to Peers, saying, “My love and my admiration for you is exceedingly great. If we have grievously hurt or disappointed you in any way, accept my apology.” Peers, in response, smiled broadly at Black.

When Peers delivered his apology, it had received mixed responses, and had consequences for him personally and for the church, including litigation. And when former students, churches and the federal government arrived at a settlement agreement, which included the Anglican Church’s establishment of a $25 million settlement Fund, Peers had been urged by ACIP not to sign it.

Hiltz said the tribute to Peers’ leadership “in considering, crafting and delivering the apology with such passion, “ was one of the recommendations made to him by ACIP members when he asked them how they wanted the apology anniversary to be celebrated.

ACIP’s other recommendation – to set up a commission that will examine the issue of reconciliation and the church’s repudiation of the Doctrine of Discovery – will take shape, Hiltz said, when he and National Indigenous Anglican Bishop Mark MacDonald name the commissioners in mid-December.

“It is work grounded in our commitment to follow through on the General Synod resolution endorsing and UN Declaration on the Rights of Indigenous Peoples,” said Hiltz. “And, I see it as an example, among many, that reflects Michael’s pledge in his apology that as a church we must be serious about healing and reconciliation.”

Peers, who arrived at the commemoration event with his spouse, Dorothy, recalled the events leading up to the apology but also spoke about his own personal journey of getting to know indigenous people.

Born in Vancouver, Peers said he grew up less than five miles away from the

Musqueam Indian Reserve, near the mouth of the Fraser River.  He recalled gatherings on Dominion Day where native people dressed in what locals thought were traditional finery, but were really non-traditional clothes from the plains, “similar to the ones in the movies, which was not part of B.C. aboriginal life at all.”

He also spoke of how, half a century later, he learned that during the war, native families in his community had donated meat coupons issued to them by the government, asking a local butcher to distribute them to whoever was in need.

After his ordination, Peers served in Ottawa, where he was aware that there were two young people who worked in residential schools in the Western Arctic. “We used to get letters from them and the assumption then was that they were doing ‘good things.’ ”

His real education began in 1967, said Peers, when he was hired as part of the French translation staff at General Synod. Around that time, “there was severe criticism of the church’s work among aboriginal people” and a call to clean up its act. But he recalled that when the governing body had passed a motion to revise the marriage canon to allow the remarriage of divorced persons someone from a northern diocese had stood up to say that his people weren’t going to like the move. To which a bishop said, “Not a problem. We just won’t translate it.”

Peers said he was “just gobsmacked” when he heard it. “What an appalling thing to say about how people with major difficulties were going to be dealt with.”

In 1969, Peers became a member of General Synod at a time of great debate triggered by Beyond Traplines, a report prepared by sociologist Charles Hendry, who was commissioned by the church to examine its relationship with aboriginal peoples. Hendry, whose report included first-hand accounts by former residential school students, urged the church to develop a new partnership with indigenous peoples based on “solidarity, equality and mutual respect.”In the 1970s, Peers was among those tapped to help train native priests and he recalled a “riveting” experience with the Rev. Ellezer Beardy, one of the first native priests in the diocese of Keewatin whose son, Gordon, would later become Canada’s first native bishop.

While on a break, Peers, Beardy and some priests stood by Star Lake, near the Manitoba-Ontario border, and they saw a beaver swimming. “Ellezer called the beaver, and the beaver stopped, headed to the shore toward him and puttered up to him. Ellezer reached down to the beaver, blessed him and sent him on his way,” recalled Peers. “I had never seen anything like that…No wonder his son became bishop!”

Peers said when he delivered his apology he wasn’t sure how it would be received since an apology earlier made the United Church of Canada to its indigenous members had been rejected. The prospect of his apology being rejected “was a most terrible one,” he said.

The next day, however, Vi Smith, an elder, spoke on behalf of the convocation and accepted the church’s apology.

“It was just wonderful from then on,” Peers said and the room exploded in laughter. In reality, it had been an uphill work. “Litigation poured in and the litigation divided people every which way from Sunday. It divided us from some aboriginal communities, from government…”

But there were wonderful moments of grace, too, he said, noting how even dioceses, which never had any residential schools, contributed to the settlement fund.

It was what he had expected to happen, too. When he spoke the words of apology, said Peers, “I really had the confidence that the church would take the ball and run with it.”