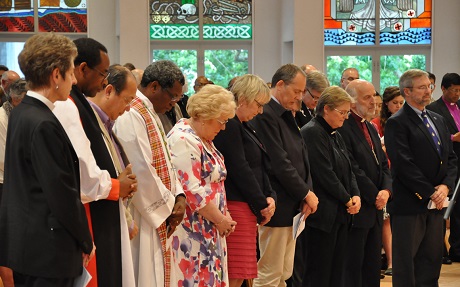 Dr Sarah Macneil (third from right) is commissioned by former Archbishop of Canterbury Rowan Williams as a member of the Standing Committee at the Anglican Consultative Council meeting in New Zealand in 2012. Photo: ACNS

[Diocese of Canberra and Goulburn] Australian church history has been made with the election of the Rev. Sarah Macneil as the first female diocesan bishop of an Anglican diocese.

Macneil, who is from Canberra, has accepted her appointment as 11th bishop of the Anglican Diocese of Grafton. She will be consecrated and installed early next year.

Macneil said she was “surprised, overwhelmed, humbled” to be the first Australian woman elected a diocesan bishop.

“I am awed by the confidence placed in me by the [Grafton diocese] appointment board and by their willingness to be trailblazers,” she said.

Macneil is a former dean of Adelaide and archdeacon in the Diocese of Canberra-Goulburn. She is presently senior associate priest at Holy Covenant in Jamison, Australian Capital Territory.

Her election comes almost 20 years to the day since the first ordination of a woman in Grafton diocese which embraces the North Coast of New South Wales, extending from Port Macquarie to the Queensland border.

Her consecration in Christ Church Cathedral, Grafton, early in 2014 is expected to draw a large number of people who have been prominent in the advocacy of women in leadership within the Anglican Church during the last 3o years.

Colleagues describe Macneil as having a servant heart, being prayerful, possessing insight and humor, and delighting in diversity within the church.

She is a life time Christian in the Anglican tradition and, before ordination, worked in Australia and abroad with the Commonwealth Departments of Foreign Affairs and Trade.

Bishop-elect Macneil is a member of the Standing Committee and of the Anglican Communion.