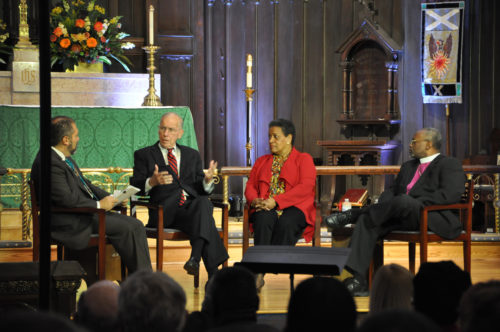 [Episcopal News Service – Jackson, Mississippi] Racism is ingrained in U.S. culture and, despite substantial progress, Americans must remain vigilant about their tendencies to exclude those they define as “the other,” agreed participants in the Nov. 15 opening session of “Fifty Years Later: The State of Racism in America,” a two-day gathering sponsored by the Episcopal Church and the Diocese of Mississippi.

Human history has seen a “lurching expansion” of the categories that previous generations used to define and then exclude, Presiding Bishop Katharine Jefferts Schori said in her keynote address.

“There is good news in the increased crossing of old boundaries; there is hope in the shrinking ability of younger generations to recognize those boundaries,” she said. “Yet continued vigilance is required, beginning with our own interior lives.”

How, she asked, does one encounter a stranger and make assumptions that influence how one decides to interact with the person?

Saying “the human heart is larger than the fences we build between us,” Jefferts Schori defined vigilance as “an essential spiritual discipline linked to the examination of conscience and repentance.”

“Learn vigilance,” she concluded. “Teach and work for justice that we might become the beloved community of God’s rainbow people. Every family, language, people and nation gathered before the lamb, himself one of the lowly and rejected. Dream that world into being here on the earth, and drive out hell to bring it to birth.”

Earlier this week the Episcopal Church released the results of a poll on perceptions of racial discrimination that it commissioned from Harris Interactive. The poll found that nearly all Americans (98 percent) feel that there is at least some discrimination in the United States today. Yet, more than eight in 10 agree that in the future, Americans will be more accepting of all races, the poll found.

“Attempts to speak simply and directly about why and when race matters and when it does not are dismissed as playing the race card, and the speaker dismissed as a race hustler,” he told the gathering.

Suarez added that Americans also “have a hard time talking about progress – even striking, substantial, undeniable progress – because the weight of so much remaining to be done is with us all the time.”

The 90-minute program was webcast live from the Diocese of Mississippi’s St. Andrew’s Episcopal Cathedral in downtown Jackson, where 350 people registered to attend. Another 300 locations connected to the webcast as members of many dioceses, congregations, seminaries and other groups gathered across the United States to watch, some using a discussion guide developed for the forum.

The webcast will be available for on-demand viewing here soon. 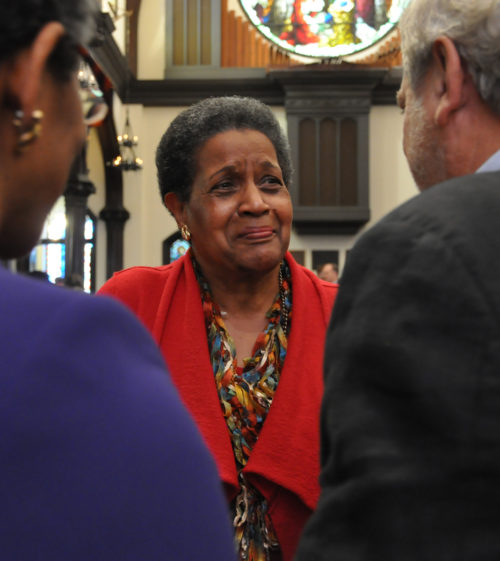 Journalist Myrlie Evers-Williams, the widow of Medgar Evers, told the gathering during a panel discussion on the state of racism today that racism “flows in the veins of America.”

Getting young people involved – helping them learn history and listening to their ideas for a better world – is key, Evers-Williams said. “We have to instill within their hearts and minds that this is not the way we should be as human beings,” she said.

On a day when the local Clarion-Ledger newspaper called former Mississippi Governor William F. Winter a leader who brings “honor [and] nobility” to politics, the 90-year-old Winter said the only way to make progress against racism is by having “honest discussions” such as the State of Racism forum and by “bringing up those questions that we would rather not face.”

Winter, the founder of the William Winter Institute for Racial Reconciliation, also pointed to young people and said he supports efforts “to invest them with the commitment to create a better society and understand that where they are now – as far as we’ve come – where they are now still leaves so many unfulfilled opportunities for so many young people.”

“We must instill in a new generation of Southerners and Americans the obligation – the duty – not to succumb to skepticism and the cynicism that is abroad in the land but to accept fully the blessings that come from being citizens of this country and having access to all of the opportunities and resources that make for a meaningful life.”

Diocese of North Carolina Bishop Michael Curry likened the state of racism in the U.S. to addiction, noting that addicts who recognize their problem never say that they are no longer addicted; they say that they are recovering.

“The reason we have to have this conversation is that there are people denying that we are addicted. We are addicted in many ways to racial patterns and [other] patterns of exclusion that harm the children of God,” Curry said. “At one time they may have been more explicit; now they are more subtle and so you can have a black man in the White House … and yet you can have voter-suppression laws being passed in many states in the United States to this day.”

Racism must be battled as a Christian battles sin, he said, by summoning the moral courage to name it, oppose it and then “seek to bring the better angels of all of our natures to play to overcome that.”

During a second panel discussion, this one considering whether there is hope for change in America’s future, Massachusetts State Rep. Byron Rushing, who is also a civil-rights leader and vice president of the Episcopal Church’s House of Deputies, argued that “racism is an invention; that racism is cultural … it is learned.” 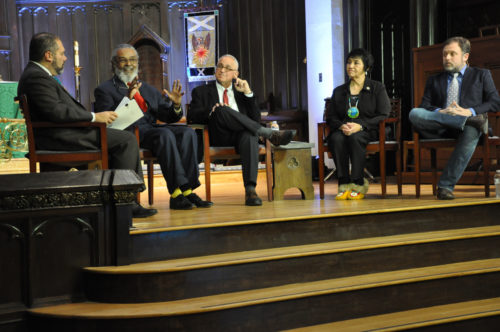 “We’re not here to try to get people to stop being prejudiced; we assume that everybody has that under control,” he said to some laughter from the audience. “What we’re trying to say is how do we as Christians, as a particular group of Christians – Episcopalians – take on the culture? How do we become countercultural?”

People who want to change that culture “have to blow up racism,” Rushing said.

“But I don’t know how you blow up racism in a country of 312 million people where almost nobody cops to being a racist,” Suarez countered.

Rushing said people have to be intentional and vigilant “so that all, all aspects of racism that appear, whether they are minor or major, get commented on.” 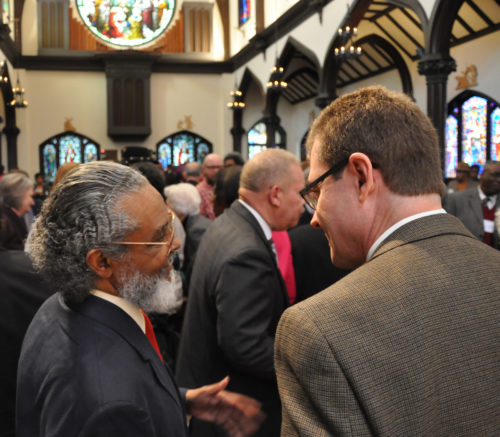 Later when Suarez asked each panelist to describe their sense of the future for America and its racism, Rushing said he was optimistic but convinced that institutions must lead the way. For instance, the Episcopal Church has been working against racism for decades and Rushing said to applause: “Let us just get two-and-half-million people being anti-racist.”

During that second panel discussion, White Earth Band of Ojibwe Chairwoman Erma J. Vizenor noted that indigenous people used to form the majority in what is now the U.S. Now there are 566 nations and 5.2 million Native Americans who make up 1.7 percent of the U.S. population “and yet we are so invisible.”

“When we talk about racism, seldom are Native Americans mentioned,” she said.

Native Americans carry their history with them in a unique way, Vizenor said, and “if we have suffered trauma, discrimination, prejudice, that revisits us many, many times in our lifetime.”

“We need to focus on reconciliation … and develop strategies to heal and reconcile,” she said.

Despite the fact that the U.S. “has failed to acknowledge the truth” about what it did to indigenous people, Vizenor said she was optimistic about the future.

“I believe in the goodness of people,” she said.

Randy Testa, vice president of education at Walden Media, said the future depends on children hearing the stories of the civil rights movement and other efforts to eliminate prejudice. “For kids in particular … a powerful story first of all affords complexity, allows them to feel as well as think,” he said.

Responding to Suarez’s question about the future, educator Tim Wise, author of Colorblind, White Like Me and Affirmative Action, said that he is an optimist “because I am alive; there is no other choice but to give up” and giving up would impose too great a burden on the children and grandchildren.

The gathering continues Nov. 16 when faith leaders and educators will gather at the cathedral to discuss the topics raised in the Nov. 15 forum and create curriculum and tools.

A related bibliography and other resources are available here.