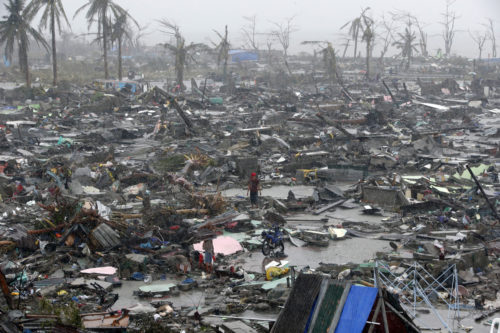 People stand among debris and ruins of houses destroyed after Super Typhoon Haiyan battered Tacloban city in central Philippines November 10, 2013. Haiyan, one of the most powerful storms ever recorded killed at least 10,000 people in the central Philippines province of Leyte, a senior police official said on Sunday, with coastal towns and the regional capital devastated by huge waves. Super typhoon Haiyan destroyed about 70 to 80 percent of the area in its path as it tore through the province on Friday, said chief superintendent Elmer Soria, a regional police director. Photo: REUTERS/Erik De Castro

In the week following Super Typhoon Haiyan’s impact on November 8, the National Council of Churches in the Philippines (NCCP) engaged its member churches, including the Episcopal Church in the Philippines, to mobilize youth volunteers for Operation Paglingap (“caring” in Tagalog).

So far, the combined effort has produced 6,000 family food packs containing a week’s worth of basic supplies such as rice, fish and cooking oil.  The supplies were purchased in Manila with local and international funds, and an additional 5,000 food packs are currently in assembly.

Food and water are being distributed from Catbalogan, a city on the island of Samar, where Haiyan first made landfall.  Supply delivery is slowly progressing via truck and ferry, and NCCP staff are working with government and ecumenical partners to coordinate distribution to families in need.  Member church presence in rural communities will greatly help in expanding the reach of relief supplies.

Assessments are currently underway that will inform ongoing response efforts, including the relocation of displaced persons and pastoral care for those who have lost loved ones.

The Most Reverend Edward P. Malecdan, Prime Bishop of the Episcopal Church in the Philippines, has released the following statement regarding the church’s response to Super Typhoon Haiyan, known locally as Yolanda:

A STATEMENT FROM THE ECP PRIME BISHOP ON SUPER TYPHOON YOLANDA

The Episcopal Church in the Philippines continues to offer prayers for our brothers and sisters in the central part of our country whose lives were tragically lost and broken in the ferocious path of a super typhoon that came a month after a killer earthquake also brought death and destruction in the same region. We grieve for and with them as we continue to implore Divine comfort upon all who bear the pain of such a catastrophic experience.

To all our constituents, let our communities and local churches be centers of prayerful solidarity and an assurance of our love,  thoughts and hopes for our suffering brothers and sisters. Let us individually and collectively take every positive effort to contribute to the massive relief undertaking. We are now working in coordination with the National Council of Churches in the Philippines for our participation in the relief work. We also affirm and support the initiatives of our Dioceses of Davao and Central Philippines as they minister to our constituents in the affected areas.

To our partners, we acknowledge and express our gratitude for your thoughts, prayers and support. We appeal for your continuing solidarity as we all join hands in rising up from the unimaginable devastation of our land.

THE MOST REV. EDWARD P. MALECDAN
Prime Bishop
Episcopal Church in the Philippines

The Episcopal Church in the Philippines is currently mobilizing volunteers, particularly youth, to collect and distribute relief supplies such as food, water and other necessities. Church buildings that were not heavily damaged by Haiyan are being used as centers of operation. These activities are part of a larger ecumenical effort being coordinated by the National Council of Churches in the Philippines. Transportation difficulties continue to pose a significant obstacle to rescue and relief work, with many areas still only accessible by military aircraft.

Director of Engagement Sean McConnell writes about the three Rs of disaster response – Rescue, Relief and Recovery – and how Episcopal Relief & Development’s partnership methodology positions the organization to have the greatest long-term impact.

Episcopal Relief & Development has been in contact with its local partner, the Episcopal Church in the Philippines, in the aftermath of Super Typhoon Haiyan.  The storm made landfall in the central Philippines on the morning of November 8, causing widespread damage and disabling power and communications lines.  Rescue and relief efforts are reportedly being hampered due to roads being clogged with debris.

The Episcopal Church in the Philippines is working with the National Council of Churches in the Philippines, an ecumenical group of which it is a member, to develop a coordinated response strategy.  Episcopal Relief & Development plans to offer technical and financial assistance to aid these efforts.

“Our prayers are with all who were impacted by this storm,” said Abagail Nelson, Episcopal Relief & Development’s Senior Vice President for Programs.  “We will continue to be in touch with our partners at the Episcopal Church in the Philippines to support them as they work with their colleague churches to determine how best to respond in this time of crisis.”

The National Disaster Risk Reduction and Management Council of the Philippines reported on the evening of November 10 that an estimated 9.5 million people across 41 provinces were affected by the storm, with 630,000 displaced and served both inside and outside the 1,645 active evacuation centers.  The report also estimates the number of damaged houses at just under 20,000.

High winds approaching tornado-like speeds caused significant damage as the storm swept across the country, producing storm surges up to 20 feet high in coastal areas and sending waves of water more than half a mile inland.

The typhoon weakened as it crossed the South China Sea to make landfall in Vietnam on the morning of November 11, and was downgraded to a tropical storm as it entered southern China later in the day.

Presiding Bishop Katharine Jefferts Schori offered the following prayer for the people of the Philippines:

O God our help in time of trouble, we pray for the Filipino people who have suffered this grievous natural disaster. We pray that survivors may find water, food, and shelter, and news of their missing loved ones. There is trauma and destruction in many places, and little news from some of the areas hardest hit. Give peace and confidence, O Lord, to those in the midst of the whirlwind. Open hearts and hands around the world to respond sacrificially to the urgent need. Help us to remember that we are connected, one to another, the living to the dead, the comfortable to the suffering, the peaceful to the worried and anxious. Motivate us to change our hearts, for our misuse and pollution of the earth you have given us to share has something to do with this disaster.  Show us your suffering Son in the midst of this Calvary, that we might love one another as he has loved us.  In your holy name we pray.  Amen.

Earlier in the day, Archbishop of Canterbury Justin Welby sent a message of prayer and solidarity.  According to ACNS, “[t]he Archbishop said the Church is praying for those who are ‘most vulnerable in this crisis’ – children separated from their parents, the sick and injured, the disabled and the elderly – and will ‘stand beside the people of the Philippines’.”

As local authorities continue assessments and communications lines are restored, the scope of the impact of Super Typhoon Haiyan is becoming known.

The New York Times reports: “The typhoon left Tacloban in ruins, as a storm surge as high as 13 feet overwhelmed its streets, with reports from the scene saying that most of the houses had been damaged or destroyed in the city of 220,000. More than 300 bodies have already been recovered, said Tecson John S. Lim, the city administrator, adding that the toll could reach 10,000 in Tacloban alone.”

Please continue to pray for all who were impacted by the storm, and for those working to save lives and restore safety and security.

Episcopal Relief & Development has reached out to its partners in the Philippines, as Super Typhoon Haiyan made landfall in the central part of the country on the morning of November 8.

According to reports, Haiyan is the strongest typhoon this year and may be one of the strongest in history, with winds that peaked at 195 miles per hour.  The impact of the storm caused flash flooding, mudslides and 30-foot storm surges, and knocked out power and communications networks in several provinces.

At this early point in the storm, three deaths have been confirmed and seven injuries reported.  As many as one million people fled to safer areas, with some 125,000 taking refuge in evacuation centers.  Authorities had warned earlier that approximately 12 million people were at risk due to the storm.

Among those most at risk were the estimated 270,000 people who had been residing in tents and other makeshift shelters following the 7.2-magnitude earthquake that struck the central Philippines on October 15, killing 222 people.

“Our partner, the Episcopal Church in the Philippines, has done excellent work in the area of disaster risk reduction over the past few years, but when events come one on top of the other like this, challenges are compounded,” said Abagail Nelson, Episcopal Relief & Development’s Senior Vice President for Programs.  “We are standing ready to offer assistance as the local Church assesses needs and identifies areas where it can best help vulnerable people in this difficult time.”

Please pray for the Church in the Philippines and for all those affected by Super Typhoon Haiyan.