A couple walks through some of the two thousand and thirteen United States flags, that are part of the Aurora Healing Fields to honor veterans, during Veterans Day weekend in Aurora, Illinois November 10, 2013. Veterans Day is observed on November 11. Photo: REUTERS/Jeff Haynes

[Episcopal News Service] Without his service dog Sparta, Allan Engvall says he’d be cowering inside his Antelope, California home with the doors locked, the blinds drawn, the burglar alarm on, afraid to venture outside even in the daytime.

“I would never go out in public. With crowds, or sitting in traffic, I’d get the feeling of being trapped, that I’d get ambushed,” said Engvall, 28, who served multiple U.S. Army deployments in Iraq. Discharged in 2007, he returned with post-traumatic stress disorder (PTSD) and traumatic brain injury after encounters with improvised explosive devices (IEDs).

“You definitely have a feeling of being outcast, like you don’t belong,” Engvall told ENS about transitioning to civilian life. “You get an empty feeling because the buddies you’ve served beside for the last 18 months are nowhere to be found. There, you do what you have to in order to stay alive, but you come home and your brain doesn’t click, you’re still in fight mode but you don’t have your gun.” 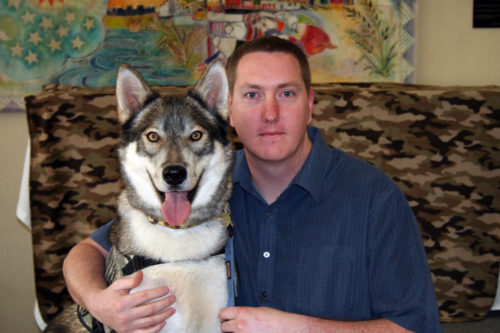 But two-year-old Sparta, an 80-pound Husky malamute mix “does crowd control” by placing himself between Engvall and others. “He watches my back,” Engvall said.

“When I start fidgeting, he’ll put his paw on me and I know my leg’s shaking, my hands are twitching, my anxiety’s getting up, so I can go outside and take a breath before I have a panic attack and make a scene,” he said.

Sparta has made it possible for him to drive, to join public gatherings, visit restaurants and attend support groups at St. Clement’s Episcopal Church, in Rancho Cordova, California, led by parishioner and dog trainer Terry Sandhoff.

A “veteran-friendly” congregation, St. Clement’s support groups are among a growing number of efforts by Episcopal churches to embrace and encourage active military personnel, their families and veterans.

Magness said that more soldiers are surviving battlefield injuries than ever before – but the catastrophic nature of those injuries complicates physical, emotional and spiritual recovery. About 385,000, roughly one-third of Iraq and Afghanistan veterans, have been diagnosed with war-related mental disabilities. Estimates of homeless veterans are at about 62,000 nationally.

Many veterans also need “moral repair of soul injury,” he said. “When people engage in war and combat, and I say this as a combat veteran myself from Viet Nam, things happen,” said Magness, a U.S. Navy veteran. “Things happen to you that go beyond the physical and emotional self. A young man or woman doesn’t engage in combat activities – the things you see, the things you smell, the things you hear and the things you do – without some potential for moral injury. This is the church’s business,” he said.

The Very Rev. Gary Hall, dean of the National Cathedral, agreed. Since the Episcopal Church has always embraced both pacifists and military chaplains, “honoring veterans is something everybody can agree upon,” he said.

It includes: becoming “military friendly,” Meairs said, “praying for them and supporting events that honor them, reaching out to their families, being aware of the stresses of military expectations, making informed referrals when appropriate, and listening without condemning.”

From New York to California, Florida to Illinois, Episcopal churches are sending “care” packages, adopting military units, and offering safe places and spaces to heal, to live and to pray – for active military and their families as well as for returning veterans.

In Avon, New York, Corrie Krzemien said members of Zion Episcopal Church helped love her into healing while Zion House, the converted church rectory next door, put a roof over her head.

Zion House is one of the nation’s first transitional residences for homeless female veterans, said the Rev. Kelly Ayer, a U.S. Army veteran, and the church rector and director of the residential program. Since 2010, Zion House has served 35 women, most of whom suffer from PTSD, military sexual trauma and other deployment-related injuries.

“My life fell apart,” said Krzemien, 53, who served on active U.S. Army duty from 1982-1985, and is still unable to talk about her military experiences. A year ago, she moved to Zion House and has become a sales representative for Boadicea, its soaps, lotions and spa product line, made of goat’s milk, which helps to support residents.

“It gives me an opportunity to be able to work again, even though I’m highly disabled mentally, and physically at times, but I keep it moving,” she said. “Mother Kelly and the people in the congregation, they just want to love on you, and that’s cool.”

Jackie Sturgeon, 76, said St. Peter’s efforts began with sending off batches of homemade cookies to family and friends of church members but grew into more personal items, candies, toiletries, books, and CDs as well as food “to everyone. They don’t have to be Episcopalian, they just have to be serving the country.”

She keeps a notebook filled with messages from appreciative servicemen and women stationed throughout the world, including one from her granddaughter, Missy Lund, who enlisted in the U.S. Navy after high school in 2002 at 17 years of age.

The St. Pete’s packages “were awesome. They just always seemed to come at the time you most needed them,” said Lund, in a recent telephone interview with ENS. She was stationed in Italy, Africa, Florida and Washington State before she left the military in 2009.

“When I was deployed, I didn’t call home that much. But always included in the packages were words of wisdom that I needed to hear,” recalled Lund, now 29 and in Florida, awaiting transfer to Virginia with her husband Nick, who just returned from Afghanistan. The packages made homecomings all the more meaningful, she said, “because I’d come back to visit the church and meet all these people who knew me and who prayed for me, but who I didn’t know.”

For John Bald, 75, a “pre-Viet Nam veteran” supporting the troops was a labor of love and a matter of faith, especially after he heard that veteran suicide rates are approaching nearly 22 per day in the United States. He formed a committee at his church, Trinity in Tariffville, and began sending care packages and connecting with local veterans groups.

“Less than one percent of our population is fighting these wars and many of them have been back four and five times,” he said during a recent telephone interview with ENS. “When I found out what a tough time they were having when they got home, suffering from PTSD, which is a very normal reaction to the terrible stress and things they’ve seen and some of the things they’ve had to do, I said that, as a Christian I cannot and will not let this happen,” he said.

The church has since “adopted” the 344th MP Company in Afghanistan. “Half are members from Connecticut and half from Massachusetts,” he said. “We send them items. We pray for them and their families, and that’s the next step, to get involved with their families and help them.”

The Rev. Marian Phipps of St. Hugh of Lincoln Episcopal Church in Elgin, Illinois, said she was moved to create twice-monthly special worship services for military families in 2010 after talking to a military mom, whose three sons deployed at the same time.

“She said that every time her dog barked, her heart sank,” Phipps recalled. “She was afraid to look up to see who was coming up her driveway, because she was always expecting a uniformed person, coming to tell her something had happened to one of them.

“It made me aware of the realities military families live with, while the rest of us go about our days and kind of forget we were in a war,” Phipps said. “But, they can’t. God moved my heart.”

The bi-monthly services are held second Tuesdays and fourth Wednesdays and although “there hasn’t been a huge turnout, I got a note once from a mom of a marine who said she was glad to know we’re praying, and keeping a faithful witness,” Phipps said.

Offering faithful witness is huge and “such a simple thing to do,” she added. “It doesn’t matter about the politics of war. People are in harm’s way and we can pray for peace and for people to be protected, and we do. My vision would be, any given night, if there was a distraught military family person who wanted to pray, there’d be a church in a town where they could pray.”

About nine years ago, Rosenberg’s encounter with a disabled veteran raised his awareness of their challenges. The television writer appealed to friends and strangers alike, local entertainment venues, hotel and restaurant owners, to arrange for donations of studio tours, Dodger baseball games, and other amenities on a shoestring budget.

Through local military hospital referrals he arranges for veterans to “come for the weekend and we build up trust.”

But it doesn’t end there. “We learn who needs what, and how we can walk the path with them from that point forward,” said Rosenberg, 57. “It’s a safe environment for them to let their hair down, just a people-to-people ministry reaching out, one on one.”

Welcoming returning soldiers, “saying thank you for your service requires an action,” he added. “Anybody can do it. I just entered it on a personal level and folks showed up to help make it happen. These guys need it. They’ve been deployed two and three times, so they’ve seen three times the amount of death and loss of friends. There’s a lot they don’t talk about and people are struggling.”

Parishioner and dog trainer Terry Sandhoff of St. Clement’s, Rancho Cordova, has witnessed many of those struggles. But she’s also witnessed “more miracles in a month than most people see in a lifetime.”

Through her work as a dog trainer at the Gabby Jack Ranch and her facilitation of the church’s veterans support groups she has seen first-time visitors “with that thousand yard stare and pretty much checked out” who arrive feeling isolated and alone but gradually connect, first with the dogs, then with other dog owners and make friends.

“They go on field trips together, it builds a support system for them,” she said.

The other challenge is to educate congregations and the wider community about how to help, say both Sandhoff, and the Rev. Christine Leigh-Taylor, St. Clement’s rector. Becoming a designated “military friendly” congregation through Care for the Troops meant, among other things, rearranging the church’s movable chairs along a back wall, so “veterans, especially those with PTSD, could sit within sight of an exit,” she said. 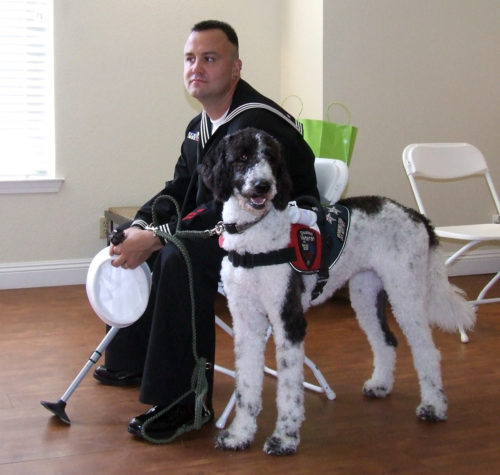 For Jerry Padgett, 38, attending St. Clement’s worship and support groups along with Bayley, his black and white “Jersey-cow colored” Labradoodle, has helped to save his life in more ways than one, he said.

“They forced me, in a good way, to get up, to talk about my injuries, even though I didn’t want to,” said Padgett, of Rancho Cordova. He sustained multiple injuries when a booby-trapped two-story building collapsed on him during a U.S. Navy rescue mission in Iraq. He suffers from PTSD, traumatic brain injury, neural neuropathy, seizure disorder, neck, leg, back and other injuries. On good days, he can get by with the assistance of a cane; other days, he uses a walker.

But Bayley and the support groups give him hope, he said. “Taking her for a walk turned into two walks a day and, from two walks to three.

“It is something so small, but so giant for a veteran who wants to find every reason to alienate ourselves. Having Bayley has given me freedom, a more compassionate heart,” he said. “I’m going to try to do a marathon, with my walker. Because of it, I am counting on less pain episodes, and fits of rage or fits of crying.”