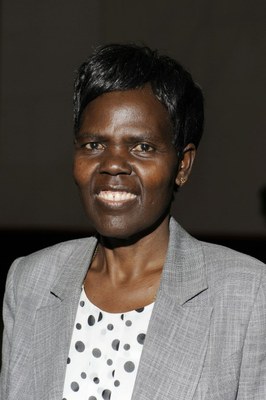 Abuom, who was elected unanimously to the position, is the first woman and the first African in the position in the 65-year history of the WCC.

Two vice-moderators were elected, United Methodist Church Bishop Mary Ann Swenson from the USA and Prof. Dr Gennadios of Sassima of the Ecumenical Patriarchate of Constantinople.

“My open prayer is that we shall move forward together, in the next years, despite our diversities that have the potential to divide us,” Abuom said shortly after her election, “…and that the WCC will continue to remain an instrument for providing a safe space for all who can come and share their hopes, aspirations and visions, and prophetic voice.”

Aboum said the prophetic voice is vital for “ecumenism in the 21st century and the church in our world today.”

As the first woman moderator of the worldwide body, Aboum says the model of consensus discernment “resonates very well with femine decision-making processes,” consultative and careful listening and seeking to understand the other person’s perspective.

Abuom has served on the WCC Executive Committee, representing the Anglican Church of Kenya. She is also a development consultant serving both Kenyan and international organizations coordinating social action programmes for religious and civil society across Africa.

Abuom was the Africa president for the WCC from 1999 to 2006. She has been associated with the All Africa Conference of Churches and WCC member churches in Africa. She is a co-president of the Religions for Peace and the National Council of Churches of Kenya.

Abuom’s areas of work include economic justice, peace and reconciliation.

Gennadios, who will serve his second term as the WCC Central Committee vice-moderator, is a professor of theology. He served as vice-moderator of the WCC’s Faith and Order Commission from 1998 to 2006. He was a staff member of the WCC’s Faith and Order secretariat in Geneva from 1983 to 1993. He is involved in a number of bilateral dialogues involving the Orthodox, the Roman Catholic and Lutheran churches among others.

In addition to being vice-moderator of the WCC Central Committee, Gennadios has served as a member of the presidium and of the governing board of the Conference of European Churches.

Swenson, who will also serve as the WCC Central Committee vice moderator, was ordained to the ministry by the Pacific Northwest Annual Conference of the United Methodist Church (UMC) in 1973. Swenson also served as senior pastor of First United Methodist Church, Wenatchee, Washington from 1989 to 1992. While a pastor in Wenatchee, she also served as president of both the Board of Directors of the Rape Crisis and Domestic Violence Center, and on the Board of Directors of the North Central Washington AIDS Coalition from 1989 to 1992.

Swenson was elected to the episcopacy of the United Methodist Church by the 1992 Western Jurisdictional Conference. She now serves as president of the church’s General Commission on Christian Unity and Inter-religious Concerns (GCCUIC).