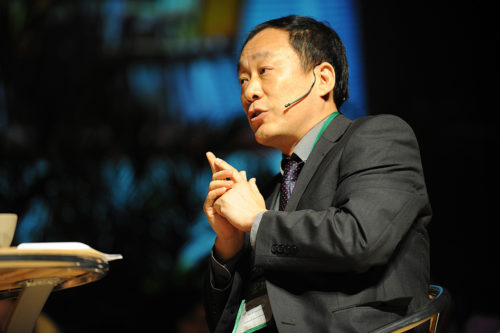 WCC 10th Assembly, Republic of Korea, Busan, 7.11.2013, Peace Plenary. Dr Chang Yoon Jae is a professor of theology at Ewha Womenâs University in Seoul, Republic of Korea. A member of the Presbyterian Church in Korea, Dr Chang is a teacher, author and speaker on topics related to society, justice, faith and peace. His ecumenical service includes tenure as an officer of the Christian Conference of Asia. Joanna Lindén-Montes/WCC

[World Council of Churches] Perspectives of peace-builders, shedding light on how peace can be achieved in communities, societies and nations, were featured at a plenary session of the World Council of Churches (WCC) 10th Assembly. The plenary focusing on the theme of peace included Nobel Peace Laureate Leymah Gbowee and Korean theologian Dr Chang Yoon Jae.

Invoking reflections on what peace means to communities and churches in a world marred with conflicts, violence and consumerism, Rev. Dr Thabo Makgoba moderated the discussions on 7 November at the BEXCO centre in Busan, Republic of Korea.

The WCC assembly is addressing the theme “God of life, lead us to justice and peace.”

Gbowee, who led women’s movement which helped end Liberia’s civil war in 2003, referred to her inspiration for peace-building as “God’s vocation.” The anger she experienced at the conflict in Liberia, child soldiers and threats to the values of traditional African community, Gbowee said, was used by her as a force to work toward peace through non-violent resistance. Her inspiration and introduction to peace struggles she traced to a Lutheran church in Liberia.

Gbowee also challenged churches not to become bystanders amid violence or becoming “co-opted” by governments. She said that such actions by the churches “break her heart.”

Chang, speaking about peace on the Korean peninsula, urged an advance beyond the Korean Armistice Agreement of 1953, after which the Koreans kept living in the “fear of war.” He said there still needs to be a transition from “unfinished war” to “permanent peace.”

Chang added that, to achieve peace, he envisions a “world free of nuclear power plants and weapons.” Since the last WCC assembly in India in 1961, Chang pointed out, the number of nuclear states in the region has more than doubled.

Despite the horrendous consequence of Hiroshima and Nagasaki, he said, several nuclear tests are still being conducted without any consideration of their impact on local communities.

Chang also invited the audience to observe a moment of silence in darkness, lighting a candle as a symbolic act to remember human dependency on electricity, produced in nuclear power plants.

Following their discussions, Agata Abrahamian from the Armenian Apostolic Church in Iran and Fabian Corrales, an interdisciplinary scholar in disabilities studies in Costa Rica, shared stories from their own communities, speaking about local realities and highlighting efforts in peace-building. Their sharing was facilitated by Stanley J. Noffsinger, general secretary of the Church of the Brethren, based in Elgin, Illinois, the United States.