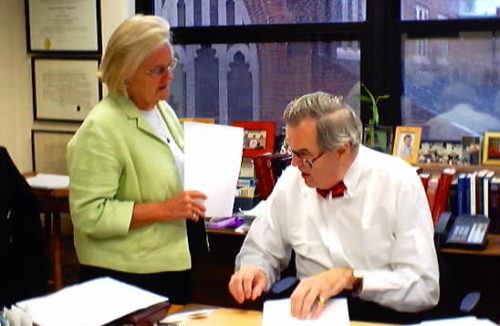 Known to many Forward Movement readers by his initials, E.S.G., Gleason led Forward Movement into the early days of the digital transformation. A gifted writer, he wrote numerous issues of Forward Day by Day as well as other books and articles. During his tenure, he committed to being in touch with readers, authors and supporters, writing at least twenty-six letters each day with the help and patience of his wife, Anne.

Gleason developed a particularly close relationship with Bo Cox, one of Forward Movement’s most beloved authors. Gleason visited Cox in prison, and the two shared a lifelong friendship. In fact, Gleason wrote the foreword to a soon-to-be published collection of Cox’s work, I Will With God’s Help. And Cox has dedicated the book to Gleason, his friend and mentor.
Before his ministry at Forward Movement, Gleason was the director of development and a member of the faculty of Virginia Theological Seminary, headmaster of Noble and Greenough School in Massachusetts, and school minister of The Phillips Exeter Academy in New Hampshire. He also served congregations as a rector and curate.

Gleason and his wife, Anne, were married for fifty-eight years and spent the last several years living in Washington, D.C. They have three grown daughters and seven grandchildren. A memorial service will be held later this year.

Speaking of Gleason’s leadership, the Rev. Scott Gunn, Forward Movement’s current executive director, said, “Forward Movement’s strong position in the church today is a credit to Ted’s vision and leadership. On a personal note, I will miss Ted’s humor, encouragement, and wisdom.”

In the prologue of one of his books, New Life, Gleason wrote, “Life is driven by renewal, the persistent energy of rebirth that makes all things new. Pain and loss and death are inevitable, but each and every time they happen, there will be new life. Death happens, but it is never the final answer.

“Everything that begins ends, and every ending contains the promise of a new beginning.”