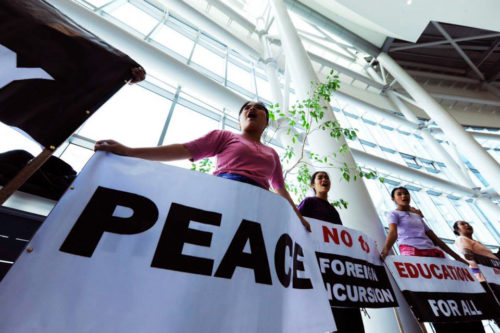 A call to work for peace and justice during the Asian Plenary. Photo: Peter Williams/WCC

Video reflections and additional coverage of the WCC Assembly are available here.

[Episcopal News Service, Busan, South Korea] Whether it’s advocating for gender equality, speaking out against religious persecution, addressing global poverty, discrimination, climate change, or a myriad of other concerns, global justice and peace issues are at the heart of the World Council of Churches’ 10th General Assembly, which has drawn thousands of Christians from 345 member churches in 110 countries to Busan in the Republic of Korea.

For Native Hawaiian Jasmine Bostock, one of the four official Episcopal Church delegates to the assembly, the WCC’s greatest gift is to play a facilitating role in addressing some of the world’s most pressing issues. “They’re the only eagle-eyed view … on a global ecumenical level that we have.”

The Rev. Margaret Rose, the Episcopal Church’s ecumenical and interreligious officer, says that ecumenism “helps us realize that we’re not the center of the world, that it’s not all about us … God is much bigger than our own definitions. Ecumenism is about living as one member of the household of God, claiming who we are in contrast to others and in the context of God’s much larger mission which requires all of us to be engaged.” 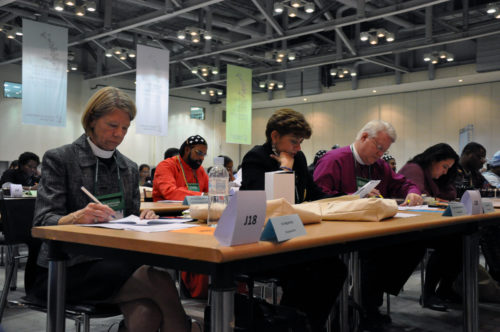 Members of the Episcopal Church’s official delegation to the WCC Assembly read over a document during one of the plenary sessions. They are (from left) the Rev. Margaret Rose, the Rev. Consuela Sanchez, Bishop Dean Wolfe and Jasmine Bostock. Photo: Matthew Davies/ENS

They are among some 160 Anglicans and more than 3,000 other Christians gathering in Busan.

Rose said that the gathering also has provided an important space for Anglicans to gather where the priority is not an internal one, “but rather how Christians together can make a difference in a broken world.”

The assembly is the highest governing body of the World Council of Churches and meets every six to eight years. It is a moment when the fellowship of member churches comes together as a whole in prayer and celebration.

Welby later told ENS that for him part of the gift of attending his first WCC Assembly has been seeing “the church in its broadest sense gathering together, lots of difference, lots of difference of opinion, lots of faults and flaws and cracks, but together … We become a reconciling force as we ourselves are involved in reconciliation.” [A video of Welby’s comments to ENS is here].

The difficulty for the WCC, Bostock told ENS, “is that there are so many issues, there are so many contexts and how are you possibly going to have a value-based judgment that says indigenous people are more important than Dalits, or … issues of gender equality are more important than climate change. You can’t level those issues on a scale of one to 10 and you certainly can’t speak for everyone in every context.”

But Bostock, 23, chair of the Episcopal Church Executive Council Committee on Indigenous Ministry, acknowledges there are certain injustices that the WCC does chose to speak on and that “in some contexts that is more powerful and more helpful than in other contexts. But it’s more about an awareness for me personally, coming from a Hawai’ian context … It’s more about facilitating our learning from one another.”

Bostock, who served as an intern at the WCC in 2010, also participated in a pre-assembly event for indigenous people, from which a statement has been drafted to present to the main assembly. “What makes indigenous issues so pressing is that indigenous people tend to be the ones affected the most by issues like climate change, clean drinking water, HIV and AIDS,” she said. [A video of Bostock speaking about indigenous issues is here]. 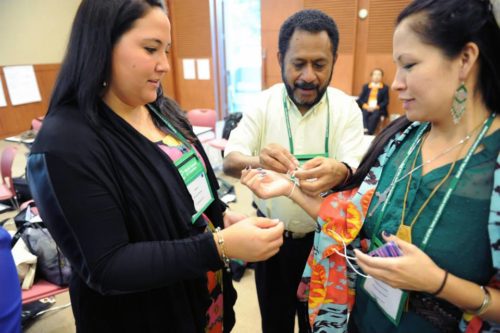 From left, Jasmine Bostock of the Episcopal Diocese of Hawai’i; Leonard Imbiri, general secretary of the Papua Customary Council; and Sarah Eagle Heart, the Episcopal Church’s missioner for indigenous ministries, help each other tie a prayer string for unity. Photo: WCC

Other participants from the Episcopal Church are Sarah Eagle Heart, missioner for indigenous ministries; Emma Lee Schauf, as a young adult volunteer in the stewards program; Rachel Cosca and Carrie Diaz Littauer, in a theological studies program sponsored by the Global Ecumenical Theological Institute; and Carlin Van Schaik, a Young Adult Service Corps volunteer working with the Towards Peace in Korea program based in Seoul.

“The Christian faith has a tremendous responsibility to come together around crucial issues – violence, war, poverty – these are our great global issues that will require a great global response from the wider church,” said Wolfe, “and so our petty differences between denominations are really highlighted when you compare them to the tremendous needs that are everywhere. So the Christian Church has an opportunity to come together in a variety of places and then do the work that Christ has given us to do – to be healers, reconcilers, sometimes agitators.” [A video of Wolfe’s comments to ENS is here]. 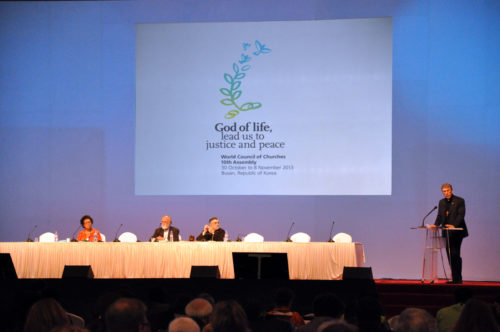 Michel Sidibé, executive director of UNAIDS, encouraged the churches to “protect the vulnerable,” especially sexual minorities, sex workers and other communities faced with the threat of the HIV pandemic. He also called on the church to challenge taboos and to encourage compassion and support for those living with or affected by HIV and AIDS.

Korea remains a politically divided peninsula with many people hoping that one day the north and south will be reunited. The churches in Korea, together with the ecumenical movement, have been encouraging reunification efforts for decades.

Asked which single issue he would like to highlight from the assembly, the Rev. Canon Kenneth Kearon, secretary general of the Anglican Communion, said that the churches in Korea, particularly the Anglican Church of Korea, have witnessed strongly for reconciliation on their divided island. “Families were divided when the divisions arose, so it’s very personal to them,” he told ENS. “Sometimes we get used to divisions in the world, and we learn to live with them and we tend to ignore them … So I’d like to make that personal commitment to overcoming divisions in a practical way.” [A video of Kearon’s comments to ENS is here]. 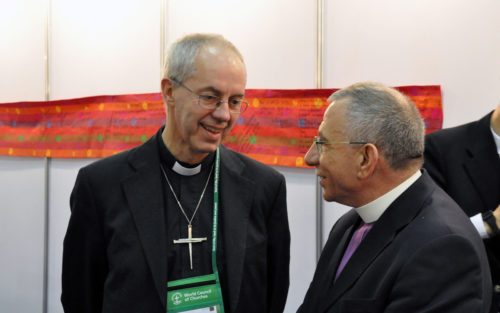 Welby joined the Rev. Olav Tveit, WCC general secretary, and Bishop Munib Younan of the Evangelical Lutheran Church of Palestine and Jordan and president of the Lutheran World Federation, in being the first signatures in an affirmation of faith leaders to “Welcome The Stranger.” The affirmation was initiated by a coalition of faith-based organizations in response to a call in December 2012 from United Nations High Commissioner for Refugees Antonio Guterres. Faith groups around the world are expected to use the affirmations to foster support for refugees and other displaced people in their communities.

During the weekend, Nov. 2-3, participants fanned out across South Korea for various exposure visits on justice and peace issues and to attend worship services with hundreds of Christian communities throughout the country.

In the final days, the assembly will move mostly into a business mode, prioritizing messages, formalizing statements and calls to action, and proposing overall policies for future programmatic work of the WCC. A Central Committee drawn from the WCC delegates will largely work on drafting any final messages.

Along with the WCC member churches, partner organizations and other churches, such as the Roman Catholic Church, have a strong presence at the event. That makes an assembly of the WCC the most diverse Christian gathering of its size in the world. It is a unique opportunity for the churches to deepen their commitment to visible unity and common witness.

Since the World Council of Churches was established in 1948, this marks the first time the General Assembly has met in Asia. The Republic of Korea was chosen because the church in recent decades has grown rapidly in Korea, where nearly 25 percent of the population is Christian.

The Episcopal Church’s full communion partners also have a strong presence at the assembly, including representatives of the Evangelical Lutheran Church in America, Moravian Church, Old Catholic Churches of the Union of Utrecht, Philippine Independent Church, and Mar Thoma Syrian Church of Malabar, India.

Archbishop Anders Wejryd of the (Lutheran) Church of Sweden, which is in the process of formalizing a full communion relationship with the Episcopal Church, said: “I think Christianity becomes too little if it is limited to ourselves. You have to see other expressions and see how Christianity responds to other challenges than your own.”

Presiding Bishop Katharine Jefferts Schori, who was represented at the assembly by Wolfe, has described the gathering as “an opportunity to stand with others for the purpose of building a society of peace with justice.”

She told ENS that the Episcopal Church’s participation “is our act of solidarity, our joining with other members of the body of Christ to realize this dream of God. We pray with our presence as well as our actions, strategizing, thinking theologically, and building coalitions. I give thanks for the willingness of our representatives to join this assembly in Busan, Korea.”