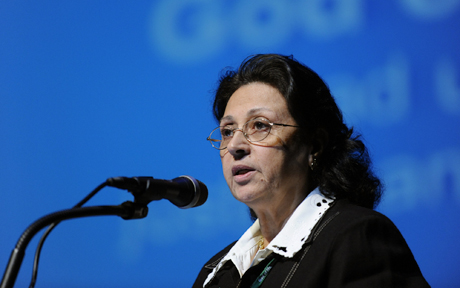 [Anglican Communion News Service] “’God of life, lead us to justice and peace’ has become a prayer around the world.” These were words of Dr Wedad Abbas Tawfik about the theme of the World Council of Churches (WCC) 10th Assembly. She shared her experiences and hopes for social and political stability as a Coptic Christian in her country, Egypt.

Tawfik, who was one of the speakers at the World Council of Churches (WCC) 10th Assembly in Busan, Republic of Korea, made special reference to the situation of Christians in the Middle East, Egypt and Syria in particular, inviting prayers for peace for the region.

Tawfik was addressing a plenary session of the WCC assembly on 31 October.

“Experience of turmoil and pain in my own country allow me to share with you how Christians in Egypt continue to bear witness to the God of life,” said Tawfik, who is also a member of the Middle East Council of Churches.

She explained that Christianity has deep roots in the history of Egypt. Therefore the recent developments and turmoil affecting Egyptians are most unfortunate.

Tawfik added that many Egyptians have seen their loved ones killed, injured, arrested or tortured, with Coptic Christians among them. Coptic churches have been attacked, and the property of Christians has has been destroyed, and relatives have been killed.

The December 2010 “Arab Spring” raised the expectations of the Egyptians, aspiring for “justice and peace” in the Middle East region, has resulted in violence and instability.

For Tawfik, the turmoil for Christians in Egypt began when they woke up to the news of an atrocious bombing of the Alexandria Church in 2011. The bombing resulted in killings of more than twenty people, according to media reports.

“This terrorist attack still managed to unite both Christians and Muslims into a bond of suffering, where they mourned together. The Muslims also stood up in several localities to protect the Christians while they prayed in their churches,” Tawfik shared.

“True Islam is against violence. By committing such acts, the terrorists violate the Islamic rules.”

Striving for justice and peace

The suffering experienced by the churches was only part of the whole picture of the country’s suffering, Tawfik said. Shortly after, on 25 January in 2011, both Christians and Muslims rushed together to the streets demanding their right to dignified life, freedom and social justice.

For several days, Tawfik explains, “violence showed its ugly face, leaving countless peaceful protestors being attacked, yet they met with victory, and an oppressive regime was ousted, leaving behind an elated and hopeful Egypt”.

She said, “After two years Egyptians went to the streets again, only more unified, determined and hopeful this time, rising against the oppressive regime.”

Yet the challenges for Egyptians continued, said Tawfik. She shared that many Christians were killed in various government raids, while schools, buildings, orphanages, houses, buses and cars owned by the churches and Christians were destroyed.

She went on to say that these terrorist attacks were perpetrated in the name of Islam. They clearly violate the values and principels of Islam which promote justice and peace for all, as is the case with all other religions.

Amidst this suffering, Tawfik said, the church did not forget its role, as “God knows our troubles and is our patience, and fulfills good will for all.”