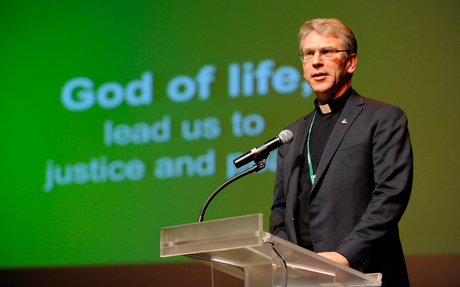 [Anglican Communion News Service] The 10th Assembly of the World Council of Churches (WCC) opened on Wednesday 30 October in Busan, Republic of Korea under the themeGod of life, lead us to justice and peace.

The opening service of common prayer on the first day of the Assembly honoured diverse faith traditions from around the world. The gathering prayer included deeply moving litanies of lamentations, cries and hopes from the churches in Africa, Asia, the Caribbean, Europe, Latin America, the Middle East, North America and the Pacific.

The first plenary session of the assembly welcomed delegates and participants to Busan. The mayor of Busan, Hur Nam Sik, moderator of the Korean Host Committee of the WCC assembly the Rev. Dr Kim Sam Whan and the WCC general secretary Rev. Dr Olav Fykse Tveit welcomed all the assembly participants.

Tveit also welcomed three churches accepted into the WCC fellowship since its 9th Assembly in Porto Alegre, Brazil in 2006. These churches are the Independent Presbyterian Church of Brazil, which joined in 2008; the Lao Evangelical Church, 2008; and the Evangelical Lutheran Church in Jordan and the Holy Land, 2013.

Expectations of the assembly

At the opening, four young people were invited by WCC president Rev Dr. Ofelia Ortega Suárez to share their expectations of the WCC assembly. These young people included Sonia Tzvozanni from Cyprus, Thomas Kang from Brazil, Thabile Lolo from South Africa and Takape Baleiwai. They shared short videos showing their home contexts and expectations, which included calls for the WCC assembly to address issues of poverty and climate change. The assembly received video and written greetings from the Ecumenical Patriarch Bartholomew I and Pope Francis of the Roman Catholic Church.

In its first business session, the Assembly received for action and discussion the reports of the moderator of the Central Committee and the WCC general secretary which reflected on the journey to Busan since the Porto Alegre, Brazil Assembly of 2006.

The 10th Assembly will continue through 8 November, with thematic plenaries on Asia, mission, unity, justice and peace. The assembly also includes an exhibition and encounter space featuring exhibitions and displays from Korea and beyond, book events and more than 20 workshops during the day in the Madanghall at the BEXCO Center, the WCC assembly venue in Busan. Madang is a Korean word that denotes a courtyard in a traditional Korean house, village or palace.

The Assembly is the highest governing body of the WCC and brings the fellowship of churches together in prayer and celebration. The Assembly has the mandate to review the work of the WCC, and to determine the overall policies, to issue public statements and to elect new members of the WCC Central Committee.

— J. Ayana McCalman is a lawyer and a missionary for the Council for World Mission. She works for the United Congregational Church of Southern Africa as communications and justice advocacy officer.