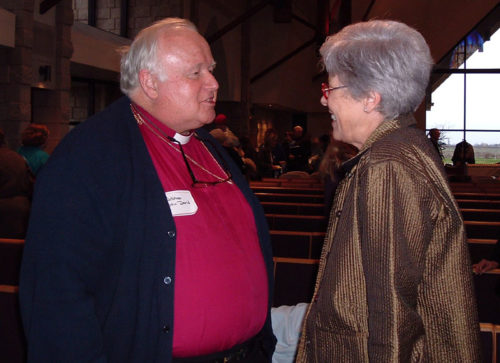 Retired Bishop John-David Schofield, who was then bishop of the Episcopal Diocese of San Joaquin and then-House of Deputies President Bonnie Anderson talk Feb. 10, 2007, after the end of an all-day meeting of Episcopalians in Lodi, California. The meeting occurred 10 months before Schofield and a majority of the diocese’s congregations voted in December 2007 to realign with the Argentina-based Anglican Province of the Southern Cone. Photo: Mary Frances Schjonberg, Episcopal News Service

[Episcopal News Service] Retired Bishop John-David Schofield, who nearly six years ago voted with a majority of the Episcopal Diocese of San Joaquin’s congregations to realign with the Argentina-based Anglican Province of the Southern Cone, died Oct. 29.

A statement on the Anglican Church in North America’s website said Schofield, 75, was found dead seated in a chair in his home in Fresno, California. Friends had come to check on him, according to Bishop Eric Menees of the Anglican Diocese of San Joaquin.

Details about funeral services are not yet certain.

Schofield, at odds with the Episcopal Church over the ordination of women and gay clergy, and issues of biblical authority, had urged the Central California Valley diocese to disaffiliate and join the Southern Cone. That vote happened Dec. 8, 2007, during a diocesan convention. He called the vote “a historic moment…a vote for freedom.”

His was the first of five efforts by bishops to lead diocesan leaders and members out of the Episcopal Church, which is made up of 109 dioceses and three regional areas.

After the San Joaquin vote, Presiding Bishop Katharine Jefferts Schori deposed Schofield on March 12, 2008, after the House of Bishops agreed with the findings of a Title IV Review Committee that Schofield had abandoned the communion of the church.

He served as vicar of Saint Columba Parish Church in Inverness, California, and became bishop of the Episcopal Diocese of San Joaquin in January 1989. Six months later he signed onto the creation of the traditionalist Episcopal Synod of America, which opposed the ordination of women and was committed to combating an alleged erosion of episcopal and biblical authority.

The ESA grew out of the Evangelical and Catholic Mission, an organization formed in late 1976 in opposition to General Convention’s decision earlier that year to allow women to be ordained as priests and bishops. The ESA later joined the Britain-based Forward in Faith, becoming known as Forward in Faith North America.

In 1992 Schofield signed an ESA statement that denied critics’ claims that the group’s efforts to set up a “missionary diocese” were aimed at fragmenting the church. Schofield’s support of the synod upset many in the Episcopal diocese.

Schofield became the leader of Anglican Diocese of San Joaquin after the 2007 split. He retired from that post in 2011 and then acted as a bishop in residence.