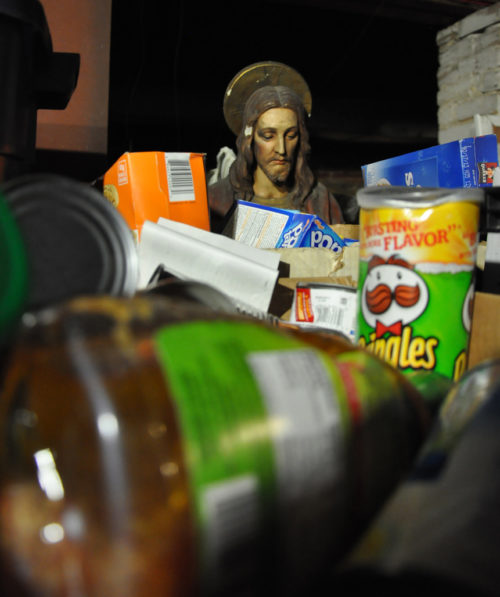 A statue of Jesus appears to be keeping watch over donated food in the boiler room of St. Mary’s by-the-Sea Episcopal Church in Point Pleasant Beach, New Jersey, in an example
0f what Katie Mears calls the “amazing work” that parishes performed for their communities after Hurricane Sandy. Photo: Mary Frances Schjonberg, Episcopal News Service

Editors’ note: A year ago today, Oct. 29, 2012, Hurricane Sandy set to reeling a large part of the East Coast of the United States. At least 147 people died in the Atlantic basin because of the storm; of that number 72 were killed in the mid-Atlantic and northeastern United States. Sandy caused an estimated $65.7 billion in damage, including destroying or damaging 650,000 homes and damaging hundreds of thousands of businesses. Episcopal News Service invited seven people to reflect on their experience of Sandy, what lessons they and their faith communities learned and what challenges they still face.

[Episcopal News Service] I’ll admit that Hurricane Sandy caught me off guard. In my role as director of the U.S. Disaster program at Episcopal Relief & Development, I try to be constantly vigilant; I normally begin each morning during storm season by opening the National Hurricane Center’s website and checking what’s going on, even before I dig into my email. But by late October of last year, I assumed the season was over. We’d had a perfectly-behaved streak of storms that all neatly hooked out to the north Atlantic, and I thought we were in the clear. I sat down at my desk that week and instead of checking the weather, immediately jumped to email and calendar and the busyness of the day. Then someone popped into my office to ask if I was tracking this storm headed to New York. Not yet…

In fall 2011, in the aftermath of Hurricane Irene and the earthquake outside the District of Columbia, we’d realized that as a New York-based organization, we had some preparedness work to do. We’d talked as a staff about what we’d do if something happened here, who’d we communicate with if we were at home, where we’d meet up if we were in the office, what the back-up plan would be if communications systems were down. We did a “drill” that fall, and hoped for the best, planning to revisit the plan and the drills as an entire staff each September (as we recommend for parishes and dioceses). 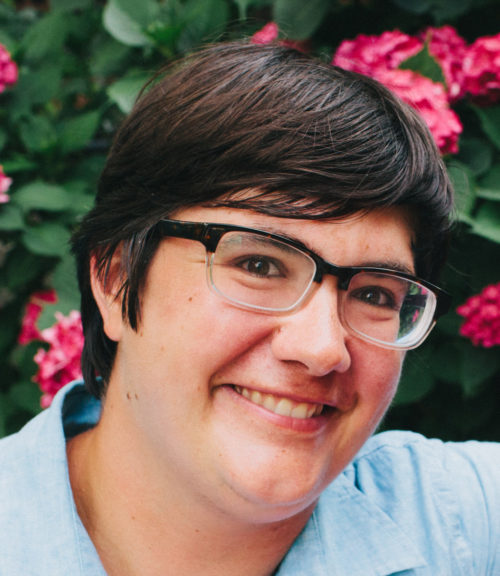 Katie Mears is director of the U.S. Disaster Preparedness and Response program at Episcopal Relief & Development.

I expected New York’s infrastructure to hold, even when tested by the complexity of this storm. Like many others, I was wrong. I didn’t fully understand what a disaster would look like when it hit a large complicated urban area; let alone a vast, diverse region, stretching from the Chesapeake Bay to the Connecticut coast.

My apartment on high ground in Brooklyn was spared by the storm. Our only perils were a few moments without internet and reduced hours at the grocery store downstairs. But then my phone started ringing, with reports from neighboring dioceses.

At Episcopal Relief & Development, I work with dioceses to create programs to support their vulnerable neighbors after disasters. We provide them with advice from others who’ve run post-disaster ministries in the past and financial resources to scale up their food pantries, meal programs, and other responses. After Sandy, that meant working with diocesan disaster coordinators from the Diocese of Easton on Maryland’s Eastern Shore up to Connecticut, as well as some inland dioceses where we feared that the storm’s rain could trigger flooding.

The needs in those first few weeks were vast. Power was out in buildings all over New York, leaving elderly and disabled people stranded—and cold—in their apartments. Electric pumps are needed to get water to apartments over 6 stories so many of these residents lacked plumbing as well. The subway system was shut down for days. I biked to work over the Manhattan Bridge with thousands of other Brooklynites, through 50 blocks of darkened lower Manhattan. As I rode through Chinatown, I saw elderly people lined up at open fire hydrants filling small beach buckets to carry home. I quickly heard from church staff in New Jersey and Easton and New York and Long Island and from the rest of the region. Each had stories of parishes doing amazing work to support their neighbors, often while dealing with significant property concerns at the same time.

We support these ministries in the early, chaotic first few weeks after a disaster. But our work is even more important as the disaster drags on and loses its position in the national consciousness. It’s in this long-term recovery phase that folks are working to create sustainable futures for themselves with housing, employment, etc. It’s where the Church can play a critical role, both physically—rebuilding homes, offering case management, hosting volunteers—but also spiritually by providing a place where the community can mourn the losses and celebrate the successes. The Church plays a critical role in maintaining focus on improving the lives of the most vulnerable survivors, accompanying those most at risk of falling through the cracks through their recovery process. We’re partnering with the Dioceses of Easton, New Jersey, Newark, and New York to create programs to help their most vulnerable neighbors recover.

Sandy reminded me, once again, the power of our church to respond. We often tell the story about our church as one of deficits—aging population, shrinking budgets, etc.—but we’re so gifted. We have churches in so many communities, they are in relationship with their vulnerable neighbors and they have the heart to do this work. A few simple systems can make those processes much smoother, and my team works to make that happen, but the orientation is already in place.

For information about preparedness planning in your own diocese, check our list of Diocesan Disaster Coordinators. If your diocese isn’t on the list, talk to your bishop

— Katie Mears is director of the U.S. Disaster Preparedness and Response program at Episcopal Relief & Development.