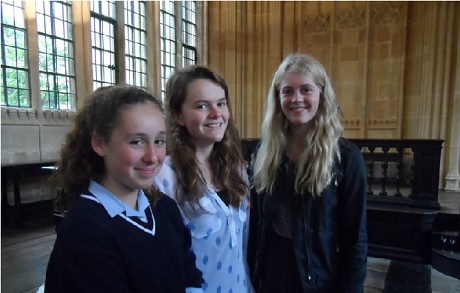 [Anglican Communion News Service] St. Mary’s Calne, a leading British independent boarding and day school for girls based in Wiltshire, has sent 15 pupils and two members of staff to Zambia to help build a school in Chama, one of the remotest districts based in the Eastern Province of Zambia.

The project is focused on helping the Anglican Street Children’s Programme in Zambia and has been organized in conjunction with The Livingstone Arts, Cultural & Sporting Events Development Organisation (LACSEDO) and The David Livingstone Bicentenary and Livingstone 2013 Initiative, to mark the bicentenary of the birth of Dr. David Livingstone.

In a statement a statement to ACNS and other media, Belinda Hodge, chairperson of The David Livingstone Bicentenary & Livingstone 2013 Initiative, said, “St Mary’s Calne sees this as the start of a long-term relationship with the new school and are hugely excited to be given such an amazing opportunity to make a difference to the everyday lives of vulnerable children in this region of Zambia.”

The Rev. Katete Jones, director of the Anglican Street Children’s Programme in Zambia, said he was happy with the development; that “it would go a long way in helping the vulnerable young girls in the region.”

He said: “In Chama, girls are missing out on education as a result of the poverty and bad traditional practices of early marriages. This opportunity of a better education will be a dream come true for them.”

“It must be pointed out that Chama is one of the remotest areas in Zambia and not many charitable organizations would want to render help as the distances from the main (tarred) roads are enormous,” he said.

St. Mary’s pupils have raised more than £1,000 (US$1600) towards building materials, over and above paying for their trip themselves. They have been fundraising all year by hosting a variety of activities in the school’s calendar, including selling Krispy Kreme Doughnuts during school mid-morning breaks and holding non-school uniform days when pupils can pay to wear their own clothes rather than the required school uniform.

As well as making a start on the structure of the new school, the St. Mary’s girls and staff will be meeting children and their families, leaders of the local community, playing sport with the children, learning about the different culture and getting a first-hand feel of what it is like to live in Zambia.

The suggested name for the new school is St. Mary’s Anglican Girls Secondary School, creating a very important link between the two schools.