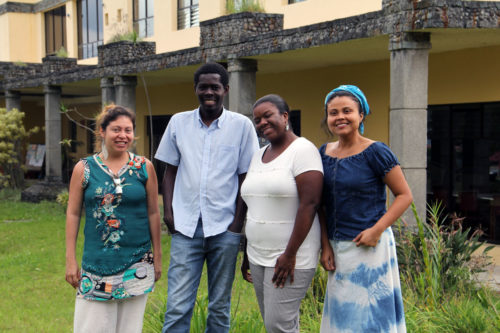 [Episcopal News Service] Luisa Salguero grew up in the Episcopal Church in El Salvador. Her late father, Vicente Alfredo Salguero, worked for the church and a plaque bearing his name hangs outside the chapel at the church’s office in San Salvador.

As a teenager, Salguero spent some time away from the church, she said during an August interview in San Jose, Costa Rica, and upon high school graduation she studied law at the University of Central America and later went to work for a multinational computer technology company for six years.

Salguero, 32, said her work as a lawyer left her feeling empty, and she began spending more time at church.

“I felt like I had a hole I was filling in,” she said. “I spent all my free time at the church and enjoyed it and discovered that that was what I really wanted to do. I loved what I was doing.”

El Salvador Bishop Martín Barahona and the church’s ministry board approved Salguero and Michel Monterroza, 28, for the university’s residential program.

“They wanted us to get all the skills; it’s going to be tough to be a woman [priest] in El Salvador,” she said.

Salguero’s and Monterroza’s studies are made possible with help from grants for the Commission for Theological Education for Latin America and the Caribbean (CETALC).

Recently, CETALC awarded 26 grants in six categories plus $299,443 in administrative funding to support the educational, theological and formational needs of the church in Latin America and the Caribbean.

The Episcopal Church’s Executive Council approved funds during its Oct. 15-17 meeting in Chicago, Illinois, according to a press release.

Executive Council established the Trust Fund for Theological Education for Latin America and the Caribbean in 1976 following the closure of the Episcopal Seminary of the Caribbean; with the funds from the sale of the property set aside to provide support for the theological education programs of the dioceses that used the seminary. The seminary was located in Puerto Rico.

The six categories of CETALC grants are: diocesan programs; provincial and regional programs; continued theological education; research and production in the theological field; graduate studies scholarships; and the Bishop Leonardo Romero scholarship. (Named for the late bishop of Northern Mexico, the scholarship allows recipients to study at St. George’s College in Jerusalem).

In addition to individual diocesan grants, Province 9 – which includes the dioceses of Puerto Rico, the Dominican Republic, Venezuela, Colombia, Central Ecuador and Ecuador Litoral – received $285,000, including funds to assist in establishing a regional seminary in the Dominican Republic.

Province 9 has lacked a “solid regional center” for theological education since the closure of the seminary in Puerto Rico, said Bishop Wilfrido Ramos-Orench, who serves as the Episcopal Church’s global partnerships officer for Province 9.

“Priestly formation processes have taken place at the local level with a very few exceptions,” said Ramos-Orench in an e-mail to ENS, adding that there is an “urgent” need to create a provincial seminary.

To meet the theological education and formation needs of seminarians in Province 9, the Provincial Council recently endorsed a grant proposal to establish a regional seminary in Santo Domingo, Dominican Republic. The proposal was presented to CETALC and approved during its August meeting in Panama City, Panama.

Since its inception, he added, the seminary has served other dioceses and churches, including Ecuador, Venezuela, Colombia, El Salvador, Cuba, and most recently a student from the Diocese of Washington.

CAETS exists to serve students, clergy and laity, who either cannot afford to study at a residential seminary, or have family and work obligations that require them to stay home, said the Rev. Glenda McQueen, the Episcopal Church’s global partnerships officer for Latin America and the Caribbean.