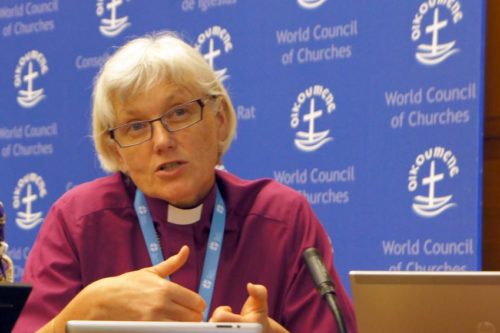 In a letter to Jackelén, LWF General Secretary the Rev. Martin Junge expressed gladness that the Swedish church had elected a leader who would bring to her new role “rootedness in the global church” and understanding of “the richness and diversity of the global Lutheran communion.”

Junge said, “Your gifts of theological understanding, pastoral care and discernment, and principled leadership will be put to good use in this new chapter of your ministry.”

In the Oct. 15 election in Uppsala, Jackelén received 55.9 percent of the votes cast in the first round to choose a successor to outgoing Archbishop Anders H. Wejryd. She will become the first woman to head the Swedish church.

Jackelén is a member of the LWF Council, and serves on its Committee for Theology and Ecumenical Relations. The general secretary underlined her leadership role in the LWF governing body and other international settings, as well as her experience while studying and teaching in Germany and the United States.

The LWF celebrates Jackelén’s election also as an affirmation “that one of LWF’s gifts to the global church is the commitment to the full participation of women and men in church and society,” Junge noted. Still, he expressed his hope that the day would come “when the news is not going to be anymore the gender of the elected leaders, but the special gifts he or she brings to the ministry.”

Jackelén studied at the universities of Tübingen (Germany) and Uppsala and Lund (Sweden), and taught systematic theology at the Lutheran School of Theology at Chicago, USA. After her ordination in 1980, she served as a parish pastor in Stockholm and Lund, and became the Lund diocese bishop in 2007. She will be installed as Church of Sweden Archbishop in June 2014, succeeding Wejryd, who has led the church since 2006.

Church of Sweden is LWF’s largest member church, with over 6.5 million members.