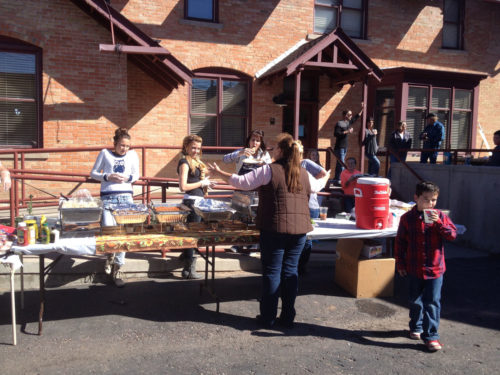 Members of St. Paul’s, a small Episcopal church in Vernal, Utah, invited furloughed workers to eat for free at a community lunch it hosted on Oct. 6. The lunch was so successful, community members are looking for ways to make it a regular Sunday event in town. Photo: Rachael Gordon

[Episcopal News Service] This Sunday, champagne is on the menu at Christ Episcopal Church in Alexandria, Virginia.

At the initiation of Ken Knapp, a government contractor, and his wife Nancy, an IRS lawyer in the Treasury Department, the church held two Sunday gatherings for people affected by the 16-day government shutdown that ended Oct. 18. They shared food, feelings about the shutdown and resources for coping. On Oct. 20, they’ll meet for a last supper – at least for now.

“We’re having a closing session with them this Sunday,” Nancy Knapp said. “We promised champagne along with the meal. I’ll be very curious to see what happens with this group. At least one gentleman asked if there was any interest in extending the group for people who were out of work. I think there’ll be some ongoing dialogue about that.”

Christ Church was among Episcopal churches across the country who reached out to those affected by the shutdown. Some experienced unexpected results from those ministry initiatives, from increased volunteering to a greater awareness of feeding ministries.

“This is my fourth shutdown,” said Nancy Knapp, who recalled being “younger and scared” during the others during the 1990s, one of which lasted three weeks. “Now, I’m 55. As a manager, I had to send people home. … I actually felt some guilt in that, because I was one of the few who was asked to stay behind, at least initially.” Ultimately, she was out of work seven days. Her husband continued to work throughout the shutdown.

But that wasn’t true for some other members of the church, located across the Potomac River from Washington, D.C. Probably 20 to 30 percent of members work for the government or a government contractor, Ken Knapp said.

About 18 people attended the first Sunday-afternoon meeting, 15 the second.

“It’s a ministry of presence and prayer and sharing and listening, really,” Nancy Knapp said. “It was really sitting around the table, having a meal together. We let them know that it was a safe place for conversation, that whatever happened there, stayed there.”

Through the meetings, participants could share resources and ideas. Had the shutdown gone on longer, they would have sent meals home with those who needed them, she said.

The first week, participants “talked a lot about feelings and coping mechanisms,” she said. “We talked about taking care of ourselves and ways we could do that.”

“I introduced the concept of outreach to them and told them we could connect them to ministries,” Nancy Knapp said. Many subsequently volunteered for the church’s program making bag lunches for homeless people and for its Lazarus Ministry to the homeless.

Said Ken Knapp, “The impact of this [shutdown] goes beyond the financial for a lot of people, and it goes to their sense of identity and their sense of purpose in life. So by redirecting those energies towards some sort of a mission or outreach project, you’re giving them back a sense of purpose … something to feel good about at the end of the day.”

And, Nancy Knapp said, “it gave them a new perspective on the problem.” They learned about “the poor among us who depend on government services who were really much more hard-hit than we were.”

In Grand Haven, Michigan, St. John’s Episcopal Church extended the hours of its food pantry and gave patrons to its twice-weekly feeding program access to the pantry’s infant supplies such as formula and diapers. They particularly were concerned that mothers have access to supplies if the local Women, Infants and Children program was forced to close, said the Rev. Jared Cramer, rector.

During the first Loving Spoonfuls meal program after news was published about the extended services, the church administrator reported that “there were a lot of new faces that she hadn’t seen before,” he said.

Beyond any individuals needing help during the shutdown, he said, “what it did wind up doing was providing a catalyst for people to know what our church does just every day, when there’s not a shutdown; that we’re a church that really cares about feeding and clothing and taking care of people, which is cool. We’re hoping that may be one good that will come out of this.”

The meal program serves mostly low-income working people, he said, noting that it’s a need that can be invisible.

“We do have some parishioners affected who are government workers, but not a lot,” he said. “Part of the difficulty, I think, is that the pain this creates in the lives of lower-income families is one that is hidden from society’s view. I grew up blue collar, and for a period of time my family relied on assistance from our church for groceries and needed items. However, like many families in our situation, we tried to be private about it. So, a lot of this pain is hard to see.”

Besides alerting those who need them to the existence of the church’s programs, he said, he hopes the publicity and demonstration of need will bring in more volunteers for the programs, which are supported by donations.

Before coming to St. John’s, Cramer was a clergy resident at Christ Church. Reflecting on the issue after the government shutdown ended, he said his time at the Alexandria church likely influenced his desire to do something because, after working in the Washington, D.C., area, he knew the shutdown affected “real people.” His first thought when the shutdown occurred was: What can the church offer to make a difference?

At St. Paul’s Episcopal Church, a historic mission parish in Vernal, Utah, efforts to help furloughed workers dovetailed with a new feeding initiative. Using a $500 grant from the diocese, the church, which has an average Sunday attendance of 26, had obtained a temporary food permit and invited everyone in town, from those in the homeless shelter to local government officials to members of other churches, to come for a meal together outside the church Oct. 6. Those who needed it, ate free; others paid the cost or the meal or made a donation.

When the shutdown occurred, they issued a special invitation to furloughed workers to come for a free meal.

“It took on a life of its own,” Gordon said. Young people attended church the next Sunday and asked, “When can we help this out again?” Other people asked the same question, with government officials suggesting county space to host regular Sunday lunches and offering to help St. Paul’s connect with other churches and organizations. Donations provided seed money for the next gathering.

It was “not what I expected at all, this wonderful starting of something new and just a great response from the community,” she said. “It’s exciting what a little parish can do when you just sit down and say, ‘What can we do?’”

Further west, in Bremerton, Washington, St. Paul’s Episcopal Church didn’t offer shutdown-specific services but did anticipate increased use of its feeding program and onsite low-income counseling center as the shutdown continued, said the Rev. Kathleen Kingslight, rector. The area contains several military installations, and people had been coming to the church for financial assistance, she said.

“I just hope this changes. It’s scary,” she said in a telephone interview several days before the shutdown ended. “It’s scary. So many of the military live hand-to-mouth … if this goes on too long, the churches are going to be inundated.”

In Atlanta, St. Bartholomew’s Episcopal Church, like Christ Church, offered a listening ministry Oct. 6 to parishioners affected by the shutdown.

“We are deeply aware of the emotion swirling in our St. Bartholomew’s community in this time that our government is shut down. Many are directly impacted by this, and we want to offer a space to gather on Sunday morning to hear how you are affected by it,” the church said in an e-mail announcement.

Back in Washington, D.C., diocesan Bishop Mariann Budde invited couples displaced by the shutdown to wed in the Bishop’s Garden at Washington National Cathedral. Cheryl Wilburn, associate for pastoral care and canonical acts, reported via e-mail Oct. 16 that she had 25 weddings scheduled from Oct. 5 to 30.

“I think most have proceeded as planned,” she said. “Requests are a combination of those deferred from federal government property to a number who were scheduled for civil weddings at our local Superior Court. … Where folks have found officiants, I have offered them a place for the ceremony. Size has ranged from parties of three to 100.”

Some other Episcopal churches followed Budde’s example, including Church of Our Saviour/La Iglesia de Nuestro Salvador, near Cincinnati in Mount Auburn, Ohio, according to the Religion News Service.

Near Grand Teton National Park, St. John’s Episcopal Church in Jackson Hole, Wyoming, offered the community green in front of its main sanctuary for couples, although no one took it up on the offer, said Greer Freed, director of development and communication. The church also operates the Chapel of the Transfiguration, with a window view of Grand Teton, that closed during the shutdown.

None of the weddings there had to be cancelled, Freed said. But the park shutdown did cause a headache, according to RNS: “Workmen who needed to winterize the building for the season had to outrun park rangers once the roads through the park to the chapel were locked down.”

– Sharon Sheridan is an ENS correspondent.