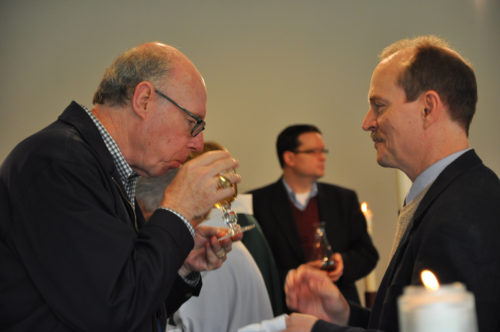 Editors note: This story was corrected on Oct. 13 at 8:30 EDT to change the amount of money dedicated to a staff position for racial justice and reconciliation, and to clarify the amount of money by which council reduced the line item for contractual “landlord” costs.

[Episcopal News Service – Chicago, Illinois] On the closing day of its Oct. 15-17 meeting here, the Episcopal Church’s Executive Council agreed to spend part of an unexpected revenue increase in the 2013-2015 budget on a new staff position dedicated to racial justice and reconciliation, a decision arrived at after a sometimes-tense but always restrained discussion.

Council also reaffirmed its February 2010 challenge to the church to raise $10 million for the Episcopal Diocese of Haiti recovery effort. It called on all parts of the church to renew their support of the on-going effort to rebuild the diocese as it nears the four-year mark since the country was decimated by a magnitude-7 earthquake on Jan. 12, 2010.

Resolution WM017 also calls on the entire church to take up a special offering for the diocese on Sunday, Jan. 12, 2014, the fourth anniversary of the earthquake.

Council received a briefing on the cathedral rebuilding project on Oct. 15.

Adding a staff position on racial justice and reconciliation

The decision to spend $258,000 in 2014 and 2015 to pay for the work of a staff officer to help foster racial justice and reconciliation came after what Presiding Bishop Katharine Jefferts Schori later called “a very hard, conflicted and tense discussion,” which she praised the members for handling “graciously.”

The tenor of the discussion stemmed not from disagreement over the need for such a position but, instead, because of the intersection concerns about how council ought to respond to a new triennial budget revenue forecast that predicts an additional $1.5 million in revenue. That revenue comes mostly from additional rental income from the church center and stronger-than-expected diocesan income and thus higher commitments to the wider church’s budget.

Some council members were concerned about whether the church should ever use unexpected revenue to fund new work that it wants to see continue into future triennia or whether it ought to use such new-found money for one-time costs or capital expenses only. Others questioned if all the anticipated extra money ought to be allocated at once. Still others asked about the scope of the responsibility of council to consult with PB&F, which proposes the triennial budget to each meeting of convention.

And others were concerned about the fact that the revenue projection was only made in late September and they felt they did not have enough time to consider what Steve Hutchinson, chair of council’s Joint Standing Committee on Governance and Administration for Mission (GAM), called the question of how to deal with more money in a “fair, open, balanced way.”

Diocese of Ohio Bishop Mark Hollingsworth, FFM chair, told his colleagues that FFM committee members also saw the need for the church to foster such work, and had the same concerns about process and budgeting philosophy.

“Across the board in Finances for Mission we are convinced of the merit of this, that this is work that we well should do,” he said. “At the same time, we felt that putting this in the budget now is establishing a new position and without having more conversation particularly with Program, Budget and Finance but also with others about how do we deal with an increase in revenue … we were divided … each of us divided personally about it.”

“This was a very difficult conversation,” he said.

They considered suggesting that the decision be postponed until council’s February 2014 meeting, but “this one pushed us beyond where we could offer a concrete direction to the council,” Hollingsworth said, asking the council to discuss the question.

Saying she has the “utmost respect for process,” council member Anita George of Mississippi said “there have also been processes that have caused many of us to continue ask the question ‘My God, how long; how long?’”

Speaking after George, the Rev. Brian Cole of Lexington said he was “feeling the tension in my gut as I speak to this.” He felt “sort of set up” by coming to council to learn that there was more money available to spend, being given specific suggestions on how to spend it and being asked to decide immediately.

“I think we as a council actually do a really poor job at process and so I would encourage us not to move on this at this time,” he said, adding that the church will continue to speak out against racism whether the position is funded in October or February. He acknowledged that he was standing “on this really awkward spot” by asking for a delayed decision.

After the Rev. Jon Floberg of North Dakota spoke of his concern about spending all the new revenue at once and asked what would happen if there was not enough money to continue funding for the Episcopal Church in Navajoland, Diocese of Michigan Wendell Gibbs told his colleagues that he assumed his colleagues were well-intentioned but said “it doesn’t work when we unintentionally pit one ethnic group against another.”

“Are we a people of faith who believe that God will provide or not?” Gibbs asked.

Navajoland Bishop Dave Bailey acknowledged that he wakes up early in the morning “worrying about where the dollars are going to come to make the payroll,” but said the proposed position is “sorely needed.”

“I don’t know what’s going to happen to us but I would encourage you to support this position,” he said.

Lelanda Lee of Colorado, who chairs council’s Joint Standing Committee on Advocacy and Networking, said that “as adaptive leaders we have a responsibility to be bold, to really go where the gospel is leading us.”

“We are really missing our opportunity to live into the gospel boldly if we do not fund this position,” she told council members.

Bishop Stacy Sauls, the church’s chief operating officer, said in response to a question that the job was not devised after it became apparent there was more budget income.

“The genesis of the position had nothing to do with the fact that there ended up being [more] revenue,” he said, adding that the forecast of more income opened up a possible way to make the position a reality.

The idea to add the position came in response to developments such as the acquittal of George Zimmerman for the murder of Trayvon Martin and the U.S. Supreme Court’s ruling invalidating key parts of the national Voting Rights Act, Sauls said. Those events in particular, he said, prompted church center staff to think that “maybe it was time to return to spiritual leadership in advancing racial justice.”

In all council spent about a half hour discussing the addition before Jefferts Schori called for prayer and then a break. When council members returned, they quickly passed a revised 2014 budget that included the new position.

The budget they approved included most of a series of staff-proposed changes, with two larger exceptions. In one instance, FFM reduced by $50,000, after consultation with staff, a proposed $350,000 addition of contractual “landlord” costs connected with new tenants at the Episcopal Church Center in New York.

In the other change, council also agreed with a FFM suggestion that rather than add a proposed $400,000 to the church’s financial support of the inter-Anglican budget for the London-based Anglican Communion Office, it would allocate $337,000 in the 2014 budget. The latter amount is about equal to the 2013 allocation. Hollingsworth told council that the committee wanted to consult with PB&F about the 2015 funding. And the members later formally agreed, via Resolution WM016, to revisit the matter at their February 2014 meeting “for consideration of more robust funding” in the 2015 budget.

In other business, council

* heard a brief report from council member Brian Krislock, GAM vice chair, about the work of a small group of GAM and FFM members who are reviewing a study of the possible relocation of the church center, which council had asked for in February 2012 and received a year later.

He said the committee is continuing to look at “the current asset and how to use that asset, how to deal with that moving forward” while also talking to current tenants, potential tenants and other groups that relocated, as well as preparing a survey for the entire church about what it wants in a church center. That survey, planned yet this year, would inquire about such things as fiscal and geographic factors, Krislock said.

All of the group’s work ought to give it a “better sense” of what the next steps ought to be and “what we ought to be looking for in the future location of the church center,” he added.

Krislock cautioned council members that it is “a very sensitive subject” to speak publically about studies having to do with the potential sale or retention of the church center property at 815 Second Avenue in New York.

After General Convention past Resolution D016 in July 2012, saying “it is the will of this convention to move the church center headquarters” away from that building, Krislock said, “the office of the church center was bombarded with calls from real estate brokers wanting to put offers on the building and investigate that possibility.”

Specific statements by council can influence the valuation of the building and, thus, possible options for the building.

A summary of all the resolutions council passed at the meeting is here.