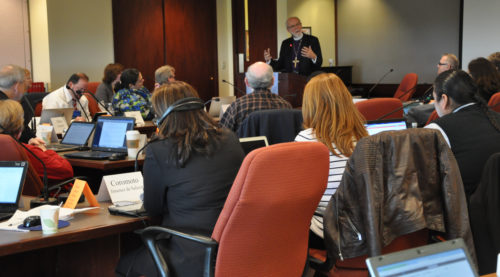 [Episcopal News Service – Chicago] The Episcopal Church’s Executive Council began its Oct. 15-17 meeting here facing an agenda that ranged from specific line-item adjustments to the current budget and the structure of the next triennium’s budget to large conceptual issues about the future shape of the Episcopal Church.

The members also are facing a discussion about the recent resignations of four members of the United Thank Offering’s board. The resignation came over what has become for some a controversial effort to draft a memorandum of understanding between the UTO and the Domestic and Foreign Missionary Society, and new bylaws for the historic organization which Presiding Bishop Katharine Jefferts Schori said last month were meant to bring the operating procedures “into compliance with both federal law and with DFMS policies.”

The presiding bishop and Steve Hutchinson, chair of the council’s Joint Standing Committee on Governance and Administration for Mission (GAM), briefly addressed the UTO situation during the meeting’s opening session.

In her opening remarks, Jefferts Schori compared what she called “the political theater” surrounding the UTO controversy to the U.S. federal budget stalemate, adding, however, that she believes that “there is more will here to find an effective resolution.”

“Politics of all sorts, civil and ecclesiastical, must take place in ongoing conversations that seek and expect a resolution that was not initially evident,” she said.

“I have confidence that God will continue to show us a way to be thankful for what has been going on in this church for centuries, for the ministry of women and men and children over those centuries, and for the remarkable gifts the United Thank Offering has given to the world,” Jefferts Schori said.

Hutchinson, who has been involved in the work on the bylaws and memo of understanding, told council that his committee would meet with some of the UTO leaders who had been invited to attend this council meeting.

“We look forward to this timely opportunity to share hopes and dreams for this important mission work, as we begin to explore moving beyond recent misunderstandings and confusions. Some of these respective concerns are complex and very longstanding, so our efforts will be very carefully and prayerfully undertaken,” Hutchinson told the council. “We all wish to support a strong and exciting future for the UTO. Today will represent an important next step toward that goal, not a conclusion.”

Hutchinson said, “We are not here today to solve the problem; we are here to listen” and discern a way to move forward.

When he convened the GAM meeting later in the day, Hutchinson got committee members’ support to hold the UTO discussion in executive session because, he said, of “the issues, the sensitivities — to put it one way, the risks of an initial discussion of this type.”

Hutchinson said he asked for the closed session because “this is about creating … a safe place for very open conversation.”

“It is my hope and my expectation that we will be able to talk to each other in ways that are not with the anticipation that it is spread across the Internet,” he said, adding that he hoped “we can start with a process that is quite brutally honest where necessary, compassionate, hospitable.”

It is not known what resolutions, if any, GAM will present to the full council any resolutions concerning UTO.

Some changes proposed to the 2014 budget
Also during the opening plenary, Episcopal Church Treasurer Kurt Barnes explained to the council a series of staff-proposed changes to the 2014 portion of the 2013-2015 triennial budget, along with some recommended possible adjustments for 2015. General Convention approves the triennial budget, and the council often revises the three annual budgets, based on changes in income and expenses.

The council adjusted the 2013 budget twice.

The bottom line of the proposed changes means the triennial budget would show a surplus of $52,834, as compared to the $30,284 budgeted by convention.

The income side reflects stronger-than-expected diocesan income and commitments to the wider church’s budget. In the 2013-2015 triennium, the dioceses are asked contribute 19 percent of their annual income to help fund the churchwide budget. Each year’s annual giving in the three-year budget is based on a diocese’s income two years earlier, minus $120,000.

Barnes told the council that the triennium budget was created with an assumption that diocesan income would decline 1 percent each year. That has not happened, and 2014 and 2015 income from dioceses is now “conservatively” assumed to be at the same level as 2013, he said.

In addition, the budget now will receive approximately $380,000 in annual rental income from leasing the second floor of the Episcopal Church Center in New York to a private school. That income was not included in the version of the triennial budget that the convention passed. Total annual rental income is nearly $1.73 million, and tenants reimburse the church center more than $100,000 for utility costs, Barnes said. Rental income now covers all of the approximately $1.6 million it costs to operate the church center each year, he said.

The increases in income are partially offset by a loss of nearly $800,000 in income from a group of trust funds consisting of money originally given to support work in China. After the 1949 Communist Revolution, that work could no longer be accomplished and Executive Council chose to spend income on Asia-related ministry elsewhere in the church, Barnes said. Now, however, mission work is possible again in China; thus the $800,000 now must be diverted from of the budget and credited to the funds. As with use of all trust fund income, the specific, future use of the income from these trusts would have to be approved by the council.

There also have been changes on the spending side. The largest increase comes in the proposed addition of a staff officer for racial reconciliation. The costs associated with that position and the officer’s work are $285,000 for the remainder of the triennium.

Another major increase comes via a proposal that the council continue to correct a mistake made in the triennial budget regarding its financial support of the inter-Anglican budget for the London-based Anglican Communion Office.

In other business:
* Council members got an update on the work thus far of the Task Force for Re-imagining the Episcopal Church. Katy George, TREC co-convener, and the Rev. Dwight Zscheile, a task force member, led them in a discussion of some of the task force’s conclusions thus far. An ENS story about that presentation is here.

* The council met with architects and others involved in the planned rebuilding of the Episcopal Church cathedral in Port-au-Prince, Haiti. An ENS story about the proposed design for that building is here.

The rest of the council’s agenda
The Oct. 15-17 meeting is taking place at the Evangelical Lutheran Church in America’s office here near O’Hare International Airport. Outgoing ELCA Presiding Bishop Mark Hanson welcomed the council during its opening plenary session Oct. 15 and praised what he called the “evangelical, missional imagination” that is growing between the two churches.

Hanson, who is about to finish his work as presiding bishop, expressed his “deep and abiding gratitude to Bishop Katharine” for the sense of shared leadership that the two bishops have under the churches’ full communion agreement.

“You have been a great colleague,” he told her, his voice cracking with emotion.

He told the council that the Episcopal Church was “blessed with a presiding bishop that has profound wisdom, who is greatly respected all over the world for her prophetic voice, her gravitas, her episcopal ministry that is so communal, and [she is] such a wise theologian that can keep up with any scientist in the room. It is kind of cool, actually.”

Council members spent time before dinner on Oct. 15 with representatives of the Bexley Hall Seabury-Western Theological Seminary Federation, which has been based in the ELCA building since late 2011.

The council will meeting in committee all day Oct. 16. It will also worship with ELCA staff members and others during the late morning that day. On Oct. 17, the council meets in plenary session all day to hear committee reports and to consider resolutions.