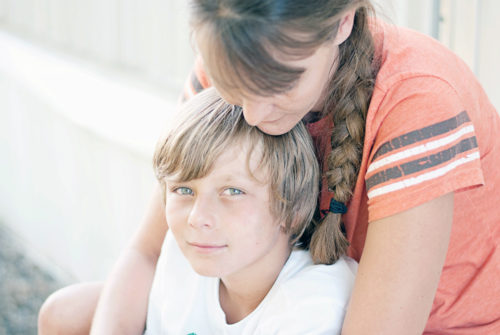 [Episcopal News Service] It all started with a sandwich.

Karen Olson was working for Warner Lambert and had taken one of her frequent trips into New York for a lunch meeting when she encountered a homeless woman sitting outside Grand Central Station.

“In the early ’80s in New York City, it was hard to walk a city block all of a sudden without seeing somebody who was homeless,” Olson recalled. “I passed by homeless people regularly, I guess like everybody else.”

This time, instead of walking by, she impulsively bought a sandwich for the woman and ended up talking with her. “She said she hadn’t eaten since yesterday. I learned a little bit about her life, and a barrier was sort of broken. Up until that point, I had just thought you just don’t go near homeless people.”

Back home, Olson told her 10- and 12-year-old sons about the homeless woman, whose name was Milly. Their response: “Let’s make sandwiches and give them to homeless people in New York City.”

“For a couple of years,” Olson said, “every other Sunday, we would go in armed with sandwiches and got to know [homeless] people by name.”

She began arming herself with knowledge as well, about homelessness and particularly the plight of homeless families. Ultimately, she turned to the religious community in her home county, Union, in New Jersey. When they couldn’t work out the logistics of opening a shelter, they created a new model: Eleven churches and one synagogue agreed to feed and house homeless families a week at a time in rotation, while the Elizabeth YMCA provided space for a day center for the families. An area car dealer discounted the cost of a van to transport families between the center and the host congregations. And the first Interfaith Hospitality Network was born, opening in October 1986.

“To my surprise, hundreds of volunteers came out wanting to make a difference,” Olson said.

Soon that one network grew into multiple networks.

“I never really planned to start an organization,” Olson said. But this year, that organization she didn’t plan to start, now called Family Promise, is celebrating its 25th anniversary of becoming a national program. Nationwide, it provides “shelter, meals, and housing and job placement support to more than 49,000 homeless family members annually,” according to the organization’s website.

Family Promise involves 6,000 congregations – about 8 percent of them Episcopal – and 160,000 volunteers in 41 states, Olson said. “Virtually every faith is involved. There’s some wonderful partnerships of different faiths working together in local communities.” 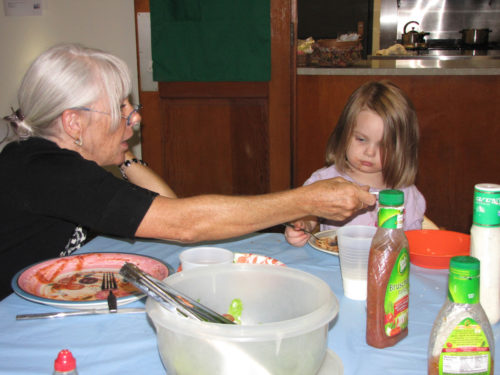 “The great genius of Family Promise is that you see God’s power unleashed through this network of congregations, all responding to the call to serve and care for the most vulnerable amongst us,” said the Rev. Andrew Sherman, rector of St. Gregory’s Episcopal Church in Boca Raton. “As people of God, we’re all responding together to care for the most vulnerable. For me, theologically, it’s really teaching us about the kingdom of God.”

Twenty-three congregations support the network, with 11 serving as host sites for up to 14 people for a week at a time about five times a year. St. Gregory’s has dedicated a residence on its campus to the program, so some congregations who can’t host families at their own sites act as “hosts” while the homeless clients stay at the Episcopal church’s house.

“Right now our house is being used probably about 30 weeks out of 52,” Sherman said. This not only lets congregations without hosting facilities participate in the program but also provides some housing continuity for families who otherwise would be moving every week, he said.

“I’m not used to being in a different place very week,” said Brenda Gery, a Family Promise of Warren County client staying at St. Luke’s Episcopal Church in Phillipsburg, New Jersey. “I’m not used to this kind of situation. … It’s difficult being with people I don’t even know.”

Gery, 52, had been living in Family Promise churches for four months. She couldn’t afford to stay in subsidized housing, where she’d lived for nine years, after she lost her job as a cashier.

On this evening, she looked forward to seeing her almost-16-year-old son, staying with family in Phillipsburg. He plays baseball and has two more years of high school. “He wanted to stay in Phillipsburg with his friends,” she said. Another son, 18, lives on his own in Pennsylvania.

“The people at the church have been nice. It makes it a little easier,” she said. She was looking forward to the week she’d spend at Phillipsburg Alliance Church, which she used to attend.

Another single mother, Colleen Dolce, about to turn 24, was spending her second night at St. Luke’s with her daughters Ryleigh, 3, and Sophia, 18 months. She’d moved around a bit before this, particularly during the previous two months, before connecting with Family Promise. About 60 percent of Family Promise clients are children, most younger than 6, Olson said.

“It’s affected them a lot more than it’s affected me,” Dolce said of her children. “I think they’ve become more attached to me. I’ve literally been the only stable thing they have. The good thing is, they’re little. But the time I figure everything out, they won’t really remember much of this.”

There’s a lot to juggle. A van transports her family to and from the Family Promise day center, from which she then drives to a babysitter and her job at Dunkin’ Donuts. Each location is a distance from the others, and she was working to find compatible hours and day-care assistance.

“All the people at the day center are really helpful,” she said. Amenities include a shower and locker room, a washer and dryer, a kitchen, computers for job searches and a toy room for the children.

Back at the church, volunteers provide dinner and breakfast and stay overnight with the homeless guests. On this evening, Kathleen Scala had prepared a spaghetti dinner and was eating with the families.

“I just need to give where giving is needed,” she said. “If I’m cooking at home, I can certainly cook from here.

The ministry makes good use of the church’s space to fill a need, she said. “You want, as a church, to reach out to the community.” 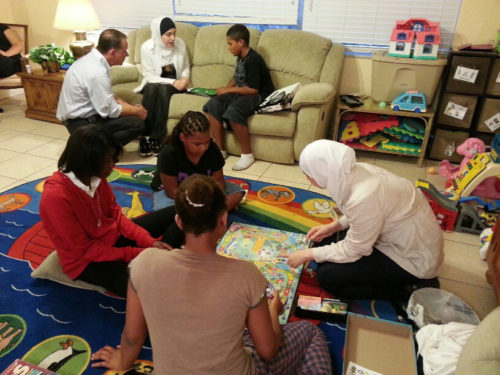 Sherman helped launch Family Promise in Palm Beach County after discovering it didn’t have a homeless shelter, yet had more residents than Rhode Island. “People would come to our door at the church who were homeless, and you’d try to help them. There was just a glaring gap of both need and lack of services.”

The Family Promise network is helping to meet that need. Since 2008, according to a report to the network’s annual meeting in January, “Family Promise provided over 10,000 ‘bed nights,’ 30,000 meals and 83,000 volunteer hours from 1,100 dedicated volunteers. A paid staff of three, aided by ‘expert’ volunteers, mentors and participating congregations, helped families improve parenting and budgeting skills while finding training, jobs, housing, child care and transportation. With program graduates now numbering 180 adults and children, Family Promise has achieved an enviable success rate of nearly 85 percent, slightly higher than the national Family Promise organization’s 80 percent average.”

Noted Sherman, “It takes a village of congregations to move a homeless family from homelessness to stability, and it’s really connecting all the services.”

And it takes a lot of volunteers.

At St. Gregory’s, more than 100 volunteers help out throughout the year, Sherman said. “Normally it takes about 75 to do a hosting week, when you add up all the jobs of cooking, overnight hosting, greeting, getting the bed linens washed.”

In Bozeman, Montana, St. James Episcopal Church was the first to sign up to become a host parish with Family Promise of Gallatin Valley, thanks to the impetus of network “founding mother” Deacon Roxanne Klingensmith. “I had been long yearning for us to do something about the homeless in Bozeman. The homeless in Bozeman are still quite invisible.”

It took 18 months to get organized, from recruiting congregations to raising funds and training volunteers, she said.

From its launch in 2006 to April 2013, the interfaith network sheltered almost 100 families, according to its website. Twelve host congregations and 11 partner congregations participate, and 1,500 volunteers have completed a two-hour training required to provide direct guest services.

The idea of helping homeless families particularly attracted people, Klingensmith said. “The reason we knew it would work was because it involved children. When you talk about homeless children, that gets people’s attention.”

St. James hosts families in its former rectory about nine times a year. The families “love it because it’s a home setting and has bedrooms and two full baths and a kitchen and a dining room,” Klingensmith said.

“As far as the congregation, what it’s meant is that they get to be involved up close,” she said. “I think what they do is live out the gospel.”

“This gave them an opportunity to really … bring the love of Christ to people.”