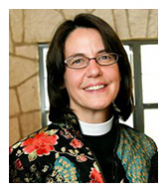 [Episcopal Diocese of Texas] Bishop Andy Doyle announced today the appointment of the Rev. Kai Ryan, rector of Ascension, Dallas, as his new Canon to the Ordinary, effective January 1, 2014.  Ryan will replace the Rev. Canon Ann Normand who retires in early 2014.

“This is a critical position for me as well as the diocese,” Bishop Doyle said. “Kai will be my primary representative in many different settings across the diocese, and I am confident in her ability to both speak, and listen, to the people of the diocese.”

Ryan, a native of Raton, New Mexico, graduated from the University of the South in Sewanee, TN and received her master of divinity from Seminary of the Southwest in 1992 where she currently serves on the Board of Trustees. Ryan served at All Saints, Austin, and in Mobile, AL, before moving to Dallas where she was called as rector of Ascension, Dallas in 1999.  She is married to Timothy Ryan, an attorney, and they have two children, Ned, 18, is a freshman at Goucher College in Baltimore and Eleanor, 12.

Ryan’s breadth of experience in four dioceses, Provincial Synod and General Convention, her participation in the national Gathering of Leaders for young clergy and nearly 15 years in a culturally diverse parish as rector stand her in good stead for the work ahead.

“The Diocese of Texas exudes creativity and energy, and an optimism about the Episcopal Church’s role in God’s unfolding future,” she said, adding that she was looking forward to working in an environment that “claims areas of difference as opportunities for holy conversation, that believes our deepest call is to serve Christ in the realities of our current context, and that believes in high standards and in God’s grace and forgiveness.”

Ryan highlighted the Diocese’s commitment to “raise up, recruit and nurture spiritually rounded and effective clergy” helped her decide to accept the appointment as canon.

Bishop Doyle served as Canon to the Ordinary from 2003 to 2008 and appointed Normand upon his election as bishop. Each canon has brought unique gifts to the office he noted.

The Rev. John Logan, who served 1996-2000, brought integrity and accountability, Bishop Doyle said, adding that Bishop Harrison, who served as canon prior to her election as bishop suffragan, worked to develop a process of clergy transitions for congregations, safeguarding support for church membership and strong policy development. Normand has built a tremendous network with the wider Church, attracting younger, dynamic clergy from outside the diocese as well as providing essential help in engaging other dioceses’ participation in the IONA School’s training for bi-vocational priests and deacons. She has continued to build integrity in the office while serving as Canon to the Ordinary.

Ryan enters the position with a history of cross-cultural ministry with which she hopes to use to enhance the diversity within the clergy of the Diocese of Texas. “I believe the Church’s breadth and depth requires a diverse body of clergy leaders [who will come from] a diversity of seminaries, backgrounds, cultures, generations and theological positions in order to build up the congregations and the Diocese for God’s mission,” she said.

“Kai is a leader in the larger Church, the Diocese of Dallas and the Seminary,” Bishop Doyle said. “I believe that she has the qualities needed to raise up, guide and recruit missionary leaders for the next season of our ministry in the Diocese of Texas and I know she will continue the legacy of strong service that has historically resided in the office of canon,” he added.