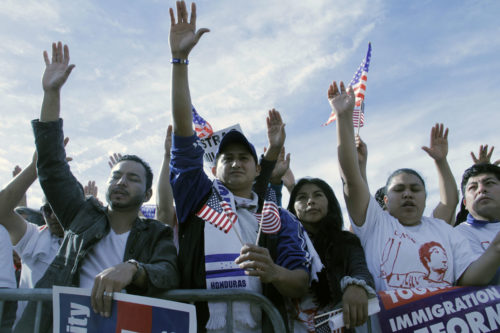 [Episcopal News Service – Washington, D.C.] “We are not criminals, we are human beings. Tell the politicians to pass immigration reform now,” sobbed a Mexican woman from the stage during an Oct. 8 Camino Americano rally on the National Mall.

The woman had just finished telling the story of her nephew, who arrived in the United States as a child and thus should have been eligible for deferred action, but was deported to Mexico, leaving his wife and 8-year-old son behind in the United States. Five months ago, out of desperation, the man tried to cross the border to reunite with his family. They haven’t heard from him since, his aunt said.

“We need an end to deportation. United we will win!” she cried.

It’s not uncommon for migrants to die or disappear while trying to cross the U.S.-Mexico border.  In Pima County, Arizona, alone, between 1990 and 2012 the medical examiner’s office examined the remains of 2,238 migrants. A third of the bodies remain unidentified, according to a report by the Binational Migration Institute at the University of Arizona.

The shutdown, now in its second week, did not stop immigration activists representing more than 18 faith traditions and 39 states from spending two days at the Church World Service Summit on Immigration Reform in the nation’s capital, strategizing ways to advance immigrants’ rights through immigration reform and to build more welcoming communities in solidarity with immigrants.

“The CWS Immigration Summit could not have occurred at a more crucial time. With so many pending legislative issues and the government shutdown, it is essential for the voices of the faithful and the voices of our immigrant brothers and sisters to rise above the fray to demand just and humane immigration reform,” said Katie Conway, the Episcopal Church’s immigration and refugee policy analyst.

“Our communities have suffered too long under our immigration law’s injustice, and today 300 ecumenical leaders came together in prayer, action and advocacy to remind the House of Representatives that the time to pass immigration reform is now.”

While thousands of immigrants joined the Camino Americano rally and march, which included an act of civil disobedience resulting in the arrest of eight Democratic congressmen, some 300 interfaith and ecumenical leaders were visiting their U.S. Representatives on Capitol Hill, petitioning them to make comprehensive immigration reform a priority.

Presiding Bishop Katharine Jefferts Schori ,House of Deputies President the Rev. Gay Clark Jennings and other denominational leaders called on U.S. House Minority Leader Nancy Pelosi (D-California), where they met with her and other House Democrats.

“It went very well,” said Jefferts Schori after the visit. “[Minority] Leader Pelosi was present as well as six other members of the House of Representatives. They are clearly passionate about getting an effective, comprehensive bill passed.

“They’re continuing to sign up co-sponsors; at this point they have 171 co-sponsors. It’s clear that there are votes in adequate numbers to pass a bill if it ever gets to the floor. And so the job now really is to strongly encourage Speaker Boehner to bring the bill to the floor, bring something to the floor.”

U.S. House Majority Speaker John Boehner (R-Ohio) has received constant criticism in the mainstream media for both the government shutdown and for stalling a House vote on comprehensive immigration reform.

The U.S. Senate passed its immigration bill in June, and House Democrats last week introduced a bill modeled on the Senate’s bill to overhaul the nation’s immigration law, potentially offering a path to citizenship to some 11 million undocumented immigrants. The Democrats’ bill has bipartisan support. 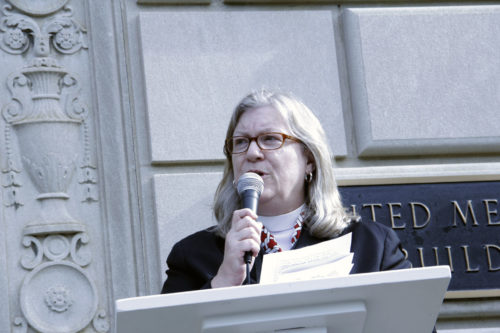 House of Deputies President the Rev. Gay Clark Jennings gave the benediction at the close of a prayer service on the steps of the United Methodist building in Washington, D.C., Oct. 8. The prayer service was organized as part of the Church World Service Summit on Immigration, Oct. 7-8. Photo: Lynette Wilson/Episcopal News Service

“I was taken by their comments that HR15, which is the bill, is already a bipartisan product,” Jennings said. “They’ve spent countless hours spent making sure it is something that could be passed.” It is her sense that House Democrats will continue to add more supporters, forcing added pressure on Boehner to introduce the bill on the House floor, she said.

“They are clearly frustrated that they can’t get it on the floor, and that they don’t have the power to be able to do that, which is the normal course of events.”

Global summit attendees – which besides Episcopalians included Methodists, Lutherans, Baptists, Presbyterians, United Church of Christ members, Disciples of Christ, Roman Catholics and others – spent the previous day in plenary and break-out sessions organized around opening a dialogue on building stronger, more welcoming communities; creating strategies for doing so in attendees’ states; and preparing for the visits with their U.S. Representatives.

The immigration summit coincided with a time of crisis. On Oct. 7, the U.S. government entered its second week of a partial shutdown that began on Oct. 1, the end of the 2013 fiscal year, when negotiations in the U.S. Republican-controlled House of Representatives failed to break a bitter budget standoff over the Affordable Care Act, sparking the first government shutdown since 1995-96.

For Episcopal Migration Ministries, the refugee resettlement program of the Episcopal Church, the shutdown has meant that recent arrivals cannot apply for Social Security cards and other government benefits they are eligible for, said Deborah Stein, EMM’s director, who attended the immigration summit.

“No Social Security card, no job,” she said. “They are here with the legal right to work.”

In 2012, EMM helped more than 4,000 refugees build new lives in security and peace in 31 communities across the United States. EMM collaborates with local partner agencies in 27 Episcopal dioceses and 22 states to resettle refugees.

People are forced to cross borders for a variety of reasons including, escaping armed conflict, as is the case in Syria today; gang and political violence; lack of employment; climate change; and the effects of international trade agreements, said Elizabeth Ferris, co-director of the Brookings-LSE Project on Internal Displacement and a senior fellow in foreign policy, during the summit’s opening Oct. 7.

In Central American countries like El Salvador, Honduras and Guatemala, migrants fleeing gang violence join the steady stream of migrants who cross into the United States seeking economic opportunities, and it is not always easy to distinguish who is and isn’t a refugee, she said.

The immigration debate in the United States, Ferris said, “is predicated on the stereotype that there are hordes of people who want to come to the U.S., and that’s not true.”

Many, she added, would prefer to stay home or closer to home, but that’s not an option.

Faith leaders attending the conference contend that immigration reform is the most important human rights issue confronting the United States today, and that what is moral and just for immigrants is also good for the U.S. economy.

For instance, the nonpartisan Congressional Budget Office found that immigration reform would reduce the budget deficit by $158 billion in the first decade after the bill’s passage and by an additional $685 billion in the second decade; if the 11 million undocumented immigrants are granted legal status in 2013, the 10-year cumulative increase in U.S. gross domestic product will be $832 billion; and that, if undocumented immigrants acquire legal immigration status in 2013, the economy will add an average of 121,000 new jobs per year, according to the Center for American Progress, an independent, nonpartisan educational institution.

On Oct. 5, as thousands of people were rallying across the country from immigration reform, California Governor Jerry Brown signed “sweeping” immigration reforms, including allowing driver’s licenses for undocumented immigrants, into law in his state.

Rather than wait for Washington, Brown said he was moving his state forward.

On Oct. 8, the rallies and the immigration advocates came to Washington. 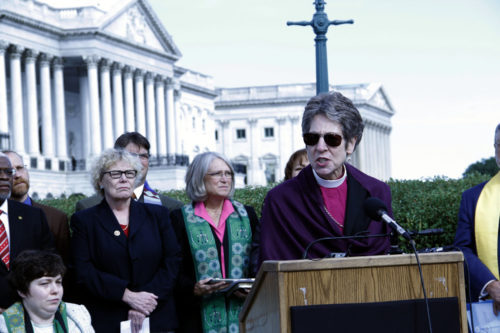 “Our immigration laws are profoundly broken and urgently need reform,” said Jefferts Schori during an Oct. 8 press conference held on the grounds of the Capitol Building.  “We need dignified ways for workers to gain citizenship and share in the creative abundance of this nation which they help to build.  We need effective ways to reunite families.  We need a route to legal residence and citizenship for undocumented persons brought here as children.”

“We need a humane and proportionate system of immigration law enforcement, instead of midnight raids that leave minor children untended and parents held incommunicado,” she said.  “We need a responsive and efficient immigration service that provides visas in months rather than decades.  We need a visa system open to all kinds of workers – venture capitalists and agriculturalists alike.”

(For a video of the presiding bishop’s remarks during the press conference, click here.)

In a bipartisan show of support for immigration reform. U.S. Representatives Zoe Lofgren and Jeff Denham, the former a Democrat and the latter a Republican, both representing the state of California, joined Jefferts Schori, the Rev. John L. McCullough, president and CEO of Church World Service, and other denominational heads at the press conference. 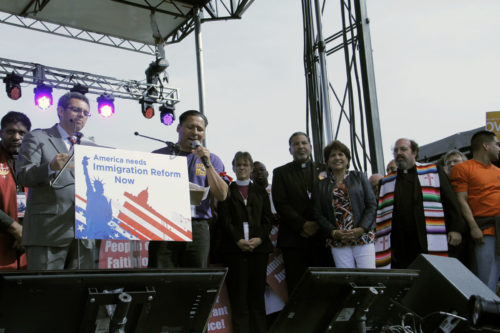 Throughout the Oct, 7-8 summit, faith leaders and advocates heard testimony from DREAMers, young people brought to the United States as children. An estimated 1.4 million of them might meet the requirements of the deferred-action initiative.

This includes people like Tulo Olubunmi, whose parents brought her to the United States from Nigeria when she was 14. Today, Olubunmi is a college graduate with a degree in chemical engineering who is undocumented, and therefore ineligible for employment.

In 2008, Olubunmi decided to “put her heartbreak aside and volunteer to help others. Today she is a volunteer senior policy analyst for the Washington, D.C.-based Center for Community Change.

Similarly, Gaby Pacheco, director of the Bridge Project, also in Washington, D.C., seeks to connect individuals from across the political spectrum to achieve immigration reform that is sensible and workable.

Pacheco, who arrived in the United States at age 8 with her parents when they migrated from Ecuador, urged summit attendees to push to keep undocumented people at the center of the immigration policymaking.

The Episcopal Church historically has supported immigration reform. Most recently, in July 2012, the 77th General Convention passed Resolution D059, “Halt Unjust Immigration Reform,” as well as D011, “Reform Unequal Immigration Law.” D059 calls for a halt to the Immigration and Customs Enforcement’s Secure Communities Program, which was intended as a way for federal officials to deport undocumented immigrants with criminal records.

The Rev. Chris Starr, rector of Church of the Atonement in Sandy Springs, Georgia, attended the Washington conference in support of his parish’s Hispanic mission congregation, filled with the many Mexican immigrants living and worshiping in his community.

“Many of them are undocumented and threatened with their families being split up, which is probably the most heartbreaking part of all of this,” he said. “They are a wonderful, family-oriented group of people that I’m happy to be representing here.”

“Then the bill comes due quite literally,” said Jefferts Schori in an interview with ENS. “Churches, nonprofits, citizen groups are going to have to step up to the plate.”

When a bill is passed, immigrants will still face a long path to citizenship, and many will need help navigating the process, she said.

One way churches, nonprofits and citizen groups might begin to serve immigrants navigating the path to citizenship is through Board of Immigration Appeals accreditation, said Dianne Aid, TSSF, who heads the Episcopal Diocese of Olympia’s Jubilee Ministry at St. Matthew/San Mateo in Auburn, Washington, and who serves as president of the Episcopal Network for Economic Justice.

By helping immigrants navigate the legal system, Aid and others have assisted 25 people in attaining visas.

“Bill or no bill, the work continues,” Aid said.

(For a video the presiding bishop’s remembrance during the Oct. 8 prayer service organized by Church World Service as part of the Summit on Immigration, click here. And for the president of the House of Deputies benediction, click here.)