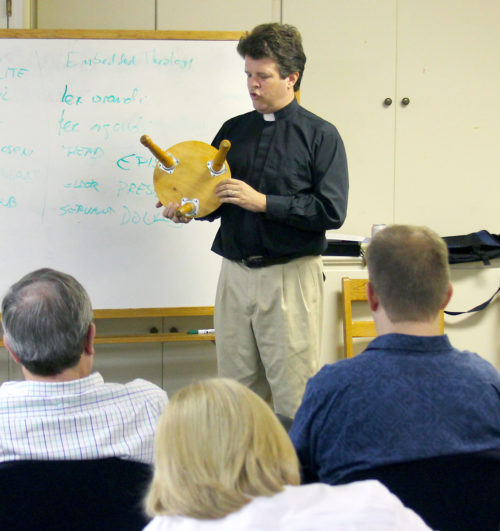 The Rev. Rob Baldwin, rector of Trinity Episcopal Church in Lawrence, Kansas, uses a milking stool to illustrate the “three-legged stool” of Anglican theology during a class on Anglican identity for students at the Bishop Kemper School for Ministry. Photo/Melodie Woerman

[Episcopal Diocese of Kansas] Class is now in session for the Bishop Kemper School for Ministry, the newly created school that provides theological education to students from the dioceses of Kansas, West Missouri, Nebraska and Western Kansas. The school’s first group of students, 35 people from all four dioceses, met for the first time Aug. 10-11 in Topeka.

To celebrate the school’s creation, Presiding Bishop Katharine Jefferts Schori will be in Topeka on Oct. 5. She will speak at a public forum on the emerging shape of the church and the changing face of ministry. She then will officiate at a service to mark the school’s opening and dedicate school facilities, and she will greet people at a public reception.

The school is named for Bishop Jackson Kemper, the first missionary bishop of the Episcopal Church, who was the organizing bishop when each of the four dioceses was founded in the 19th century. He also was committed to the value of local theological education for the growth and health of the Episcopal Church.

The school was formed from existing diocesan programs to provide a high quality theological education for people preparing for ordination and for lay leaders in congregations, all without having to head off to a traditional seminary, where costs can run more than $30,000 a year.

And for the bishops of the partner dioceses, it provides something critical – the ability to provide pastoral and sacramental leadership for their congregations.

Nebraska Bishop J. Scott Barker said the school “is an answered prayer” for his diocese, in part because the curriculum addresses “the uniqueness of the church in the Midwest,” which includes lots of smaller congregations in cities and towns that are miles apart.

Kansas Bishop Dean Wolfe said the school’s goal is to develop “visionary leaders, faithful leaders, courageous leaders” for congregations, no matter the diocese in which they are located.

West Missouri Bishop Martin Field said the school will provide “well-prepared and able” clergy for congregations that aren’t able to afford the cost of a seminary-trained priest. It also will prompt those congregations to identify natural leaders in their midst to send to the school, he said.

Western Kansas Bishop Michael Milliken called his diocese a “rural/frontier area” made up of very small congregations. This school is “one of the few ways available for a great theological education” for leaders in those churches, he said.

Field added, “I am as excited about this project as I’ve ever been about any project to engage the church for its betterment.”

He said, “‘How do you form a priest?’ implies you are asking ‘What does Christian ministry in today’s church look like?’ It’s all part of a larger context.”

Sending bivocational and nonstipendiary clergy into congregations only makes sense if lay people understand they are part of the ministry in that place, he said. One of the school’s purposes will be “empowering and inspiring more people to engage in more forms of ministry.”

Initial efforts have centered on a curriculum for the ordination track, since the four dioceses had people ready to start those studies. But Grosso said classes also will equip lay leaders to be catechists, evangelists, youth minsters, parish administrators, outreach ministers, worship leaders and lay preachers, among other ministries.

A high quality education
While the school is new, most of the students are returning for a second or third year. The program for priests runs three years and for deacons, two. Each diocese sets its own criteria for who can enroll in the school.

Charles Everson, a first-year priesthood student from the Diocese of Kansas, discovered quickly that the courses are thought-provoking. After just two weekends of classes he said, “I have a challenging and exciting road ahead of me for the next three years!”

Bruce Bower is a second-year student from the Diocese of West Missouri preparing to be a deacon. He called the courses “rigorous” and the instructors “top notch.” He said that attending the Bishop Kemper School “doesn’t mean the students have to settle for a theological education that is somehow less than we might receive elsewhere.”

The Rev. Carolyn Ballinger is a third-year priesthood student from the Diocese of Western Kansas who was ordained a transitional deacon in May. She said the courses she has taken “exceed the offerings and demands” she had when earning a Ph.D.

But beyond the quality of instruction, students praised the community that is formed among them. Ballinger said that after spending a weekend a month living, eating, learning and praying together, she and others stay in touch outside of class, “asking, giving and receiving friendship and encouragement.”

Bower said a friend of his attends a traditional Episcopal seminary and “expresses envy about how BKSM students have so much interaction together, and how we are able to grow in relationships.”

Everson said the local aspect of the school is critically important. “There are many men and women called to ordained ministry … for whom a formal seminary degree is not a viable option.”

Alison Black, a second-year priest student from the Diocese of Kansas, said, “Being a stay-at-home mom to three small children, there is no way that I could attend a traditional seminary anytime in the near future.” Ballinger said that the local setting makes theological education accessible to people from “any social class, age group, level of financial influence, and cultural or ethnic background.”

A unique structure
Grosso said he believes the school’s structure is the only one of its kind in the Episcopal Church. The Bishop Kemper School for Ministry is a non-profit corporation operated jointly by the four dioceses.

The desire for a different model for the school developed in the past year, as students from Western Kansas, West Missouri and Nebraska attended the Kansas School for Ministry. The four bishops soon saw the need for a school that was jointly owned, to allow it to grow beyond what a single diocese could provide. The Kansas school and other diocesan educational programs merged into the Bishop Kemper School.

Each of the dioceses makes a financial contribution to the school’s operations. Tuition from students also helps fund the school’s budget, including a salary for the dean, faculty stipends and reimbursement for facilities the school uses.

The board, including the four ex officio bishops, is responsible for overseeing the life of the school, as well as the work of the dean and faculty.

Ten months of classes
Bishop Kemper School students come to Topeka once a month for 10 months and take one course per weekend. Classes during the current academic year include biblical studies, ministry, theology, Anglicanism, spirituality, church history and ethics.

Faculty members are drawn from the four dioceses and include instructors with special expertise in a field. Many are ordained clergy.

Students also participate in informal sessions with experienced clergy to explore real-world, practical applications of what they are learning. They also take turns leading worship services and preaching.

The cost for ordination-track students is $1,800 a year, and the school suggests it be shared equally between the student, and the student’s parish and diocese.

The initiative, which is in the second year of a three-year pilot program, includes Texas and seven other dioceses.

Once a month for 10 months, students gather for a weekend in their own diocese where they receive instruction via videos and voice-over PowerPoint presentations that were developed by seminary faculty. Local teachers guide the video courses and teach the practical aspects of the program, such as how to lead worship. It currently provides education only for those seeking ordination as deacons and nonstipendiary priests.

Mary MacGregor, who heads the diocese’s Iona School, said programs like theirs and the Bishop Kemper School are what the church needs. She noted that in the Diocese of Wyoming, one of the Iona partners, 90 percent of their priests are bivocational. And the need for local education programs will only grow, she said.

“This is the movement that is going on in the church. There will be more internal schools in the Episcopal Church,” she said. And while quality content is essential, it isn’t the only requirement, she said. “We have to have a mix of quality, accessibility and do-ability.”

— Melodie Woerman is director of communications for the Episcopal Diocese of Kansas.