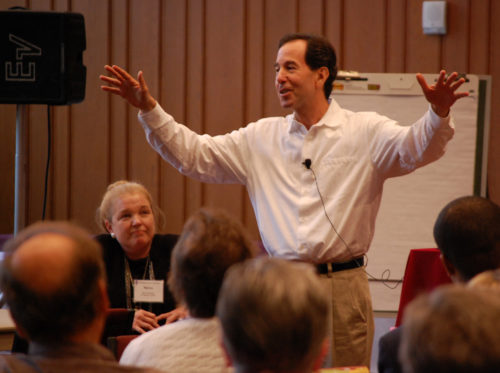 [Episcopal Diocese of Atlanta] The world is facing an unprecedented crisis of leadership that churches have the opportunity to address in their communities and beyond, Harvard Kennedy School Professor Ronald Heifetz said Sept. 30 addressing Episcopal Church clergy from Middle and North Georgia.

Heifetz’s presentation at the Cathedral of St. Philip in Atlanta focused on how to lead parishes “when the economy is uncertain, education in decline, cities under siege, and crime and poverty are spiraling upward.”

Bishop Rob Wright of the Episcopal Diocese of Atlanta said the presentation supported several goals he set last November of equipping church leaders with skills that allow them to be more nimble in responding to current challenges.

“We asked Dr. Heifetz to give us a framework for the future.”

Wright said he and some 140 priests of the Diocese of Atlanta will continue discussing Heifetz’s ideas during a retreat through Wednesday at the Mikell Camp and Conference Center in Toccoa, Georgia.

Heifetz told Monday’s gathering that an unprecedented crisis of leadership facing the church “stems as much from our demands and expectations as from any leader’s inability to meet them.

He said most people “deeply long to trust again.”

“We look to leaders for solutions, and when they don’t deliver, we simply add their failure to our list of woes,” Heifetz said. “In doing so, we do them and ourselves a grave disservice.”

Heifetz, author of the best-selling business management book Leadership without Easy Answers, said there are practical ways to find solutions to problems for those who lead and those who look to them for leadership.

“Leadership is not a position or authority,” Heifetz said. “It’s moving past what you are comfortable with and confident doing.”

“Not knowing the answer can be leadership.” Accepting a period of incompetency is necessary for growth, he said.

Heifetz said it’s not change people resist, it is loss. But sometimes, the “obvious solution can be so great a loss, we don’t know how to embrace it,” he said.

Leadership is not just a set of personality traits, Heifetz said. Leaders need to practice and build their competencies. One skill is being able to deliver challenging messages that others don’t want to hear.

Another skill leaders must hone is fostering collaborative leadership. Sometimes, Heifetz said, leadership is like making soup by using the variety of gifts available.

“You can’t lead alone; it will be a heroic suicide,” he said.

— Don Plummer is a member of St. Teresa’s Episcopal Church, Acworth, Georgia, and serves as a media consultant for the Diocese of Atlanta.