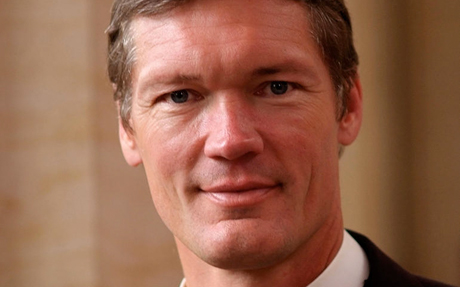 New Zealand’s David Rice set to become the next provisional bishop of the Episcopal Diocese of San Joaquin. Photo/Anglican Taonga

[Episcopal News Service] Bishop David Rice of the Diocese of Waiapu in the Anglican Church in Aotearoa, New Zealand and Polynesia is poised to become the next provisional bishop of the Episcopal Diocese of San Joaquin.

If elected, he would succeed Bishop Chester L. Talton, who has served nearly three years as provisional bishop and who has announced his intention to retire. Talton, who retired in 2010 as suffragan of Los Angeles, turned 72 on Sept. 22.

“The Standing Committee has made a very good choice because they discerned that the diocese has reached a place where we are ready to respond to the rebuilding that has been going on since 2008,” Talton said in a Sept. 26 telephone interview with ENS.

“The diocese is in a place where the clergy and the congregations are really ready to look to a different kind of future. We have a new sense now of really being a diocese, a church together, all of the congregations. We’ve been re-energized by the fact that we have begun to receive back some properties and the diocese has celebrated all that together.

“They are ready to move beyond that to actively restructuring the diocese for the kind of mission and growth they can really be about,” he said.

San Joaquin’s Standing Committee announced Sept. 25 that they had selected Rice from among several candidates they considered in consultation with the Office of the Presiding Bishop.

Via Skype, the committee had learned that Rice’s “passion is missiology and that he has a proven track record for invigorating churches. His energy, enthusiasm and zeal seem to be perfect for our diocese now,” according to the committee statement. “The Standing Committee believes that this bishop is the one whom God is calling to our diocese now.”

But, the statement also noted that Rice, who attended high school and college in North Carolina, is not presently serving in the Episcopal Church and therefore several interim steps must be taken before he can stand for election for San Joaquin’s provisional bishop.

The House of Bishops took one of those steps at its regularly scheduled fall meeting Sept. 19-24 in Nashville, Tennessee, by approving a resolution to appoint Rice as an assistant bishop of San Joaquin “provided that the diocesan convention approves the creation of the position of assistant bishop at its upcoming annual meeting and each of the canonical requirements are satisfied, including but not limited to the Canon III.12.5(b)(3).”

When delegates to the 54th annual San Joaquin diocesan convention gather Oct. 25-26 in Modesto, California, they will be asked to approve the creation of the position of assisting bishop.

“This interim step would have Bishop Rice serve as assistant bishop in the diocese pursuant to the canons of the Episcopal Church, which expressly permit a bishop from another part of the communion to serve as an assistant bishop in the Episcopal Church (Canons III.12.5 (a) and (b)(3),” according to the resolution approved by the House of Bishops.

Church canons require that provisional bishops must be either resigned from or serving in a diocese of the Episcopal Church.

In addition to the consent of the House of Bishops, Rice would also need to satisfy other conditions, such as completion of psychological and medical tests, resigning as bishop of Waiapu, receiving approval from the Anglican Church of Aotearoa, New Zealand, and Polynesia, and submitting to the doctrine, discipline and worship of the Episcopal Church in writing, according to the bishops’ resolution.

The Standing Committee proposed a February arrival for Rice, pending convention approval and completion of necessary canonical requirements for bishops. At that time, Talton would appoint him assistant bishop and Rice would begin serving in that capacity.

A proposed March 29, 2014 date has been set for a special convention to elect and seat Rice as provisional bishop.

According to an Anglican Taonga story, Rice is returning to the United States where he was born and raised in response to the needs of his extended American family.

Archbishop Philip Richardson, who is the senior bishop of the seven New Zealand dioceses, said the three primates here have accepted Rice’s resignation with regret, according to the story. “For the last five and half years, Bishop David has thrown himself, body and soul, into serving the Diocese of Waiapu,” Richardson said.

“His people here will miss him. Equally, they will understand, as we do, the responsibilities we all have to care for our extended whānau [a Māori word for extended family]. He and [his wife] Tracy will return to the U.S. with our blessing and prayers.”

Rice told Anglican Taonga that leaving would be wrenching because “New Zealand is a country that we have loved well for 18 years, and know intimately. I have been a vicar, dean and bishop here, and this is the place where our children have spent their entire lives.

“But the need is urgent. We feel it is right for us to take this step – and a response to God’s prompting.”

In 1997, he was made deacon and ordained priest in the Diocese of Christchurch of the Anglican Church in Aotearoa, New Zealand and Polynesia. He served as a vicar in a parish in New Zealand before becoming the dean of Dunedin, St. Paul’s Cathedral in 2002. In 2008 he was consecrated the 15th bishop of the Diocese of Waiapu.

He is married to Tracy; the couple has two children, Ian and Zoe, who will continue their university educations in New Zealand.

Planning has now begun for an election for his successor.

Earlier this year, five congregations that were held by a breakaway group were returned to the Episcopal Church; other disputed properties throughout the diocese are in various stages of litigation. Another church property — St. Paul’s, Modesto — was returned July 1, 2009 prior to any litigation.

Litigation is still pending for approximately five cases involving 33 more properties including the Camp and Conference Center, and the cathedral located in Fresno, along with the related diocesan investment accounts.

The Standing Committee’s statement said Rice was their choice because “we sensed that we need to think well beyond litigation, to continue to implement plans to make this diocese thrive and to move forward to set an example to the church of what resurrection looks like in the San Joaquin and beyond, in ways that we have only begun.”