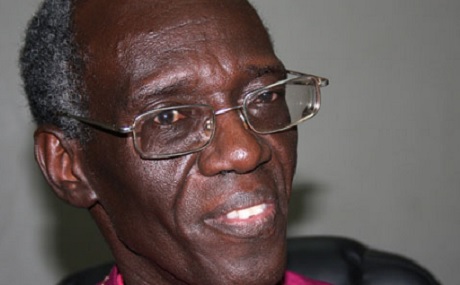 [Anglican Communion News Service] The primate of Kenya and bishop of All Saints Cathedral, the Most Rev. Eliud Wabukala, has condemned the “heinous and inhuman attacks on Kenyans and foreign residents” at the Westgate Mall in the country’s capital Nairobi.

In a press statement delivered to the media on Sept. 26 after the Anglican Church of Kenya Provincial Synod met to pray, reflect and deliberate on various issues affecting the church and the nation, the archbishop thanked the political leaders for “showing solidarity in adversity by relaying messages of hope to the nation in the midst of the crisis.”

“We in particular want to thank the president of the Republic of Kenya, H.E. Uhuru Kenyatta, and other leaders for boldly condemning the terror attack and inspiring courage in Kenyans,” he said. “As a nation, we have embraced and drawn strength from each other in spite of our political and religious diversity.”

The archbishop applauded the many Kenyans who gave their time and resources to assist in various ways, including blood donation, financial support, and feeding the volunteers.

He also acknowledged and thanked those who shared warm words of encouragement and rallied each other to pray fervently for a speedy conclusion to the standoff.

Wabukala extended his special thanks to the international community for standing in solidarity with Kenyans.

He also honored the dedicated security personnel who “literally put their own lives on the line braving uncertainty and a long standoff to save fellow Kenyans.”

The multi-agency efforts to battle the terrorists were concluded after Kenya’s defense forces managed to subdue the terrorists on the morning of Sept. 24, three days after the initial attack on Sept. 21.

The Anglican Church of Kenya has promised to continue praying and giving pastoral support to all those affected by the tragedy and has encouraged Christians to participate in the National Day of Prayer to be held on Oct. 1 in Kenya.

“It was encouraging to see the various agencies and organizations responding in record time to provide assistance to the hostages,” said Wabukala. “The unity, patriotism and faith displayed by Kenyans from all walks of life created an atmosphere of hope. It is our prayer that Kenyans will continue to invest in these actions of national unity as a valuable form of social capital.”

The archbishop thanked Muslim leaders for unreservedly condemning the attack. “We call for continued interreligious dialogue on matters of national importance as all faiths lost members in the attack,” he said. “The terror attack is denting the perception of peaceful coexistence between Muslims and Christians in this country.”

Al Shabab, a Somali terrorist group that describes itself as “waging jihad against the enemies of Islam,” was behind the attack in which up to 130 people were killed. Reports also suggest there may be more people buried under the rubble where part of the building collapsed.