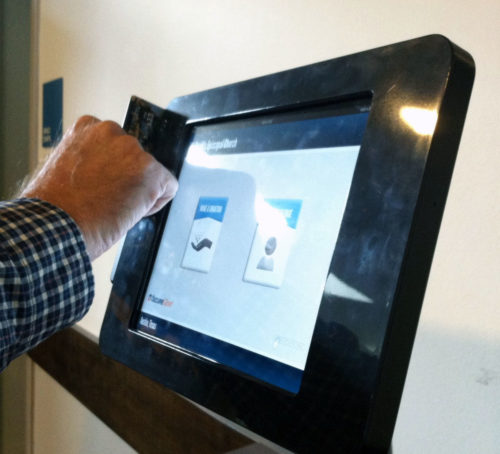 [Diocese of Texas] In a day when we use our bank cards for everything from putting money in the parking meter to buying a car, St. David’s in Austin couldn’t help but feel the pinch when an age-old tradition started feeling, well, too age-old.

“When we added up the numbers, it was startling,” said Parish Administrator Terry Nathan. “Our plate offerings dropped 50 percent in the past two years. It’s clear that passing the plate through the pews is as outdated as the proverbial buggy whip.  Our parishioners have quit using currency as their primary means of doing commerce, and the proverbial checkbook has all but disappeared.”

In August, St. David’s took online giving a step further and unveiled an electronic Giving Kiosk. Placed in the church’s lobby, the Giving Kiosk allows a parishioner or visitor to make an offering despite not having cash or a checkbook. The first time someone uses the kiosk, they are asked to enter their phone number, name and address. (They have the option of skipping this step if they wish to donate anonymously but, if not, their donation can be linked with their giving record.) With the swipe of their bank card, users are prompted to select the giving category and the amount. Receipts are sent via e-mail.

The Rev. David Boyd, rector, admits there was initial concern over how modern technology would fare, or clash, with daily prayer and worship, especially in such a historic church as St. David’s.

“Some people felt like it was money-changers in the temple, but that’s not what we’re doing here,” Boyd explained. “Just like giving and doing transactions online, we think this will become the norm. It’s a convenient way for people to be faithful in their giving.”

“It is awesome from an accounting perspective,” said Nancy Parish, St. David’s accountant. “It’s easy to get the reports and to change and add giving options. It didn’t get a lot of use the first few Sundays, but I remember when we started taking credit cards 10 years ago– it takes a while for people to catch on.”

With heavy advertising, parishioners now know the kiosk is an option and are learning all the different capacities in which they can use it. In the past few months, usage of it has doubled on a weekly basis with positive feedback from those signing in and donating. St. David’s anticipates the Giving Kiosk will become an integral part of giving and giving campaigns in the future, leaving one small problem to be solved: Is there a church out there that would like to buy some well-used, brass collection plates?