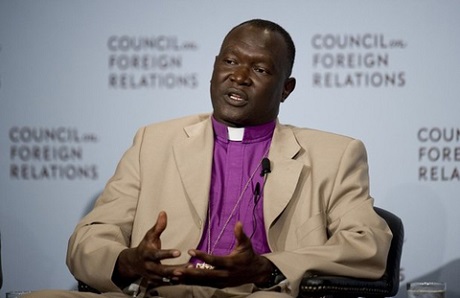 [Anglican Communion News Service] A bishop from Sudan has appealed for emergency action for the people affected by the war in Sudan’s Nuba Mountains.

Bishop of the Diocese of Kadugli, the Rt. Rev. Andudu Adam Elnail, said people, especially those from the villages of Kao Nyaro and Warne, are facing starvation and death due to the humanitarian crises in the South Kordofan State of Sudan.

“Those who have managed to escape are now living under trees and getting soaked by the rains. They have no tents, no food, no safe drinking water, and no medicine,” he said. “Some organizations in the area have given them a little sorghum, which was not enough for all the people and some have already died.”

Recently, the governor of Sudan’s South Kordofan state, Adam Al-Faki, described the ongoing war in his state as “intricate” because “it involves family members on both sides” and acknowledged that it would not stop without the spread of education.

Thousands of people have been displaced since the conflict began in mid-2011. The latest reports reaching the bishop from Malakal, an area bordering Nuba Mountains and South Sudan, suggest that the humanitarian situation is reaching “catastrophic levels.”

“People are still on the way walking from the Nuba Mountains to cross the boarder of South Sudan, which is a long distance with no food, causing the deaths of 20-25 people every day,” he said.

“We are calling for support so that we can meet these people. We sent $17,000 three weeks ago, but it is not enough.”

The bishop has since appealed to Christians all over the world to pray for the people of Nuba Mountains so that peace can prevail between the people and the government. He also called for prayer for himself and his term as they travel around their diocese.

Fighting in the region continues, with the Sudanese Armed Forces and rebels making contradictory claims over who is winning the battles. But whether one end is winning or losing, it’s the people on the ground, especially women and children who continue to bear the brunt of the war.