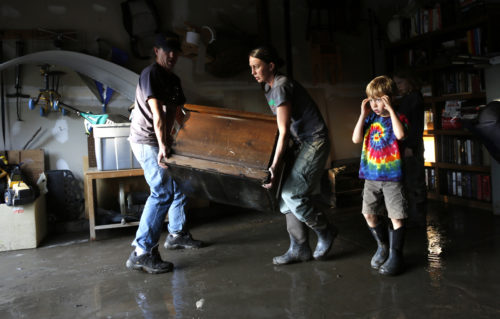 Chris (L) and Shanda Roberson (C) carry a flood soaked antique trunk from their garage in Longmont, Colorado September 16, with son Rowen (R) looking on. Seven people were confirmed dead and at least 1,500 homes destroyed in Colorado after a week of rare, torrential rains along the eastern slopes of the Rockies, and helicopter search-and-rescue flights resumed on Monday in flood-stricken areas. Photo:Rick Wilking/Reuters

[Episcopal Diocese of Colorado] Devastating floods up and down Colorado’s Front Range have impacted several communities and Episcopal churches. As those churches – none of which suffered catastrophic damage – dry out, they are making contact with parishioners, and will be working to help in their communities in days to come.

The staff in the [Diocese of Colorado] Office of the Bishop has been contacting clergy in affected areas, and has determined they are all safe and accounted for, although some of them have experienced some personal property damage and loss. Clergy and other leaders continue to get in touch with their parishioners to determine their safety and immediate needs. In some places this has been much more difficult than in others. Based on initial assessments, while many church buildings have had some flooding damage, none has catastrophic damage.

Several churches have already begun to reach out to those least likely have personal resources to deal with the disaster. St. Aidan’s in Boulder has already been working through their existing partnership with Boulder Outreach for Homeless Overflow to provide overnight shelter for the homeless in these adverse conditions. The St. Aidan’s community is also reaching out through their Canterbury ministry to University of Colorado students who suffered losses.

At St. Stephen’s in Longmont, according to the Rev. Marc Genty who lives near there, Missouri Avenue that runs in front the church became the Missouri River for a time. Foot bridges and other community structures were wiped out, but the church, which sits on a little rise, is fine. The St. Stephen’s community is reaching out to parishioners who have suffered significant property losses and finding the best way to help them.

In Estes Park, one of the communities most hard hit by the flooding, many of the major roads have washed out, making travel in and out of the town extremely difficult. Rocky Mountain National Park has been closed to visitors, and summer residents have been asked to leave.  Crossroads Ministry, a Jubilee Ministry that serves that area, will be administering some of the flood relief. Deacon Pat Washburn reports that St. Bartholomew’s basement has flooded, and they “have a lake instead of a parking lot.”

Common Cathedral in Longmont is a worshipping community that meets in a public park, and is a mix of area residents and those are homeless. Genty is the convener of that community, and was concerned from the outset about the flood’s impact on its members, many of whom camp along the banks of the St. Vrain River, one of the many waterways that came far over its banks.

As the Common Cathedral community gathered on Friday to worship, Genty could not join them because he could not leave his neighborhood because of the flood waters which isolated several parts of Longmont. The Rev. Andrew Cooley, who also lives in Longmont, could get there, and presided over a gathering of 25 – 30 people. On his Facebook page, he reported that the group – some of whom knew they had lost their homes, shared “stories of loss, anxiety, and wonderful stories of angels and acts of mercy and kindness offered.” Genty continues to be concerned about Common Cathedral’s members, and knows of at least one couple who had recently gotten in to permanent housing, who lost everything in flood.

The Office of the Bishop is working closely with Episcopal Relief & Development to identify needs and provide financial support in coming days and weeks. The Office of the Bishop is also accepting donations payable to “The Diocese of Colorado” marked “Flood Relief.”  These funds will be used for immediate needs—food, clothing, temporary shelter and medical care, and will be used along with emergency funding from Episcopal Relief & Development for these short term needs and longer term recovery needs as those are identified in the days ahead.