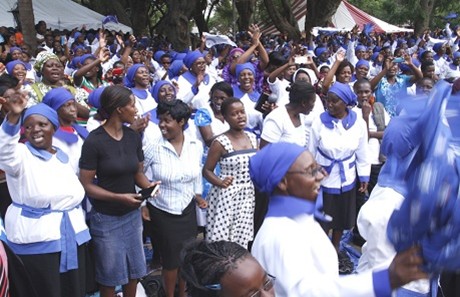 Mothers’ Union: “The fifth Instrument of communion” according to the former archbishop of Canterbury. Photo: ACNS

[Anglican Communion News Service] Anyone who has attended an Anglican church event in Africa will have encountered members of the Mothers’ Union (MU). A casual glance might lead you to believe they are merely colorfully clad women there to add flare to the church’s worship, but you would be mistaken.

The Mothers’ Union in Africa is a force to be reckoned with, particularly when it comes to social justice. This Anglican organization has around 1.3 million members in countries right across the continent, and when these women speak, they are heard.

Year after year, MU members speak out against a range of issues which continue to blight societies in Africa today. Child abuse, human trafficking, corruption, poverty, healthcare — little is out of bounds for the women in blue.

They also run various initiatives including literacy and development projects, parenting programs and microfinance initiatives. They campaign to end violence against women and the trafficking of women and children. All these activities are aimed at attaining their vision of a world where “God’s love is shown through loving, respectful, and flourishing relationships”.

In Nigeria, the MU recently took center stage when the President of Mothers’ Union and wife of the Primate of the Church of Nigeria, Nkasiobi Okoh categorically stated publicly that Anglican women would not support the legislation allowing girls to be married underage.

This at a time when fierce debates raged in the country about an issue that some sectors of society strongly supported. Instead of staying quiet, the MU stood on one of their major objectives of “promoting conditions in society favorable to stable family life and the protection of children.”

In Mozambique, the MU in the Diocese of Niassa, with the help of other church members, helped build a massive brick church where none had existed before. It was impressive to see women, who are generally considered the weaker sex by many in this country, doing ‘man’s work’: helping prepare the building for flooring, ferrying bricks and even roofing sheets.

Instead of sitting back and relaxing, the MU decided to join hands with other members of church to bring to fruition, the church’s long time dream of a big brick church building to act as a coordinating center for other smaller churches within the diocese.

The MU is an integral part of the Anglican Church in Ethiopia, which is part of the Episcopal Area of the Horn of Africa. In Gambella, one of the most troubled regions in the country, the MU provides literacy programs and other practical help to local communities. Just recently, the Mothers’ Union there announced that it would provide theological and practical survival and life skills to women across 70 villages in the region.

In Zambia, the Anglican Church, and the MU in particular, has received international acclaim for being strong advocates against gender-based violence. The statistics on gender-based violence in Zambia are shocking: international charity CARE estimates that at least 47 percent of women in Zambia have experienced physical violence with at least one in every five women having experienced sexual violence.

Former Mother’s Union President for the Diocese of Lusaka, Dr Fridah Sakala Kazembe, recently urged all women to “adhere to the objectives of the Mother’s Union in order to create safe havens for women and children in our families.” She emphasized that strictly following the MU objectives would reduce the occurrence of broken families and consequently would increase safety for families.

In Botswana, the MU recently built houses and donated them to the less privileged in their country. They also run an Orphan Day Care Centre supporting 60 orphaned children between the ages of two and six. About 150 children have since graduated from the center and are now in formal education. These children return to the center each week for a progress check, a meal and help with their school work.

The Mothers’ Union worldwide believes prayer should undergird its work. Each year, MU organizes a Wave of Prayer with each diocese given a set day to pray for other dioceses, and within each diocese each branch is given a specific time to pray. This gives a sense of unity in prayer for one another as the wave of prayer moves from branch to branch and from diocese to diocese. Perhaps this is why MU in Africa continues to have such a huge impact on society.

It is said youth are the ‘backbone’ of the Church in Africa. Nevertheless, the Mothers’ Union with its numbers and networks, its seemingly relentless energy, the pride with which they don their colorful uniforms and the aggressive way they strike at poverty and injustice, gives substance to Archbishop Rowan Williams’ comments at a World Conference of Church meeting in Brazil: