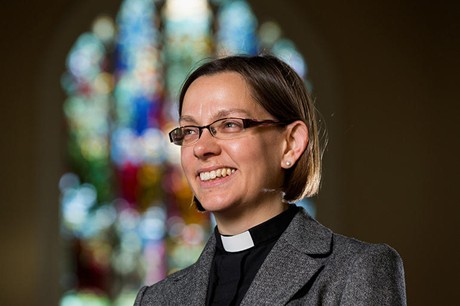 [Anglican Communion News Service] An English priest, the Rev. Helen-Ann Hartley, has been elected as the new bishop of Waikato diocese in the Anglican Church in Aotearoa, New Zealand & Polynesia.

Hartley, 40, has been living and working in the country since 2011 as the dean of Tikanga Pakeha students at St. John’s College in Auckland. She will be the 7th bishop of Waikato and the first woman to hold the office.

In a statement released Sept. 5, Bishop-elect Hartley said she was looking forward to traveling around the diocese and learning more about its people and places.

A fourth generation priest, she will be the first female priest ordained in the Church of England to become a bishop. “I hope my election as a bishop will be a sign of encouragement for supporters of the ordination of women to the episcopate,” she said.

“All, irrespective of gender, are able to witness to the gospel, both women and men are entrusted with that sacred task.”

Hartley was ordained in 2005 and began her ministry working in 12 rural parishes near Oxford. She also brings years of experience in theological education to her new role. Before moving to New Zealand, she was director of biblical studies and lecturer in the New Testament at Ripon College Cuddeston in the U.K.

“My first task is to listen to what has been achieved in the diocese so far and its potential,” she said. “Being a disciple of Christ is about learning alongside others. Education has, at its heart, the idea of ‘drawing out,’ of enabling everyone to fulfill their potential and so will be a strong foundation for my work.”

Hartley, will lead the diocese with Philip Richardson, the bishop of Taranaki and also the archbishop of the New Zealand dioceses. He described the election as “an exciting moment for the diocese.”

New Zealand’s other female bishop, the Rt Rev. Victoria Matthews, said of the announcement: “The election of Helen-Ann adds a new strength to this conversation in the House of Bishops. Helen-Ann also brings a perspective that is communionwide, working with students from across the world in her teaching and administrative roles. I warmly anticipate and welcome her presence as an episcopal colleague in the House of Bishops.”